Frontotemporal dementia (FTD) is a heterogeneous spectrum of disorders marked by degeneration in the frontal and anterior temporal lobes, resulting in various symptoms of disturbed personality, behavior, and language. FTD is the third most common form of neuro- degenerative dementia, ranking after Alzheimer disease and dementia with Lewy bodies, accounting for perhaps 5% of all dementia cases. FTD generally presents at a younger age than Alzheimer disease and has a mean age at onset of 58 years.

Behavioral and personality changes are prominent early features in individuals with FTD reflecting pathologic involvement of the frontal lobes, most commonly the right hemisphere. Symptoms include disinhibition, impulsivity, impaired judgment, and disturbed social skills. An individual with FTD may have inappropriate behavior, such as swearing, off-color jokes, and loss of social tact. Dietary habits may change, and an individual may only eat certain foods, such as sweets. Prominent personality changes are disturbing to the patient’s family, yet the patients themselves are typically unconcerned and lack insight and empathy regarding how these changes affect their families. Some individuals develop repetitious or compulsive behavior. Severe amnesia and visuospatial impairment are typically not present. In fact, many FTD patients are oriented and able to keep track of day-to-day affairs. 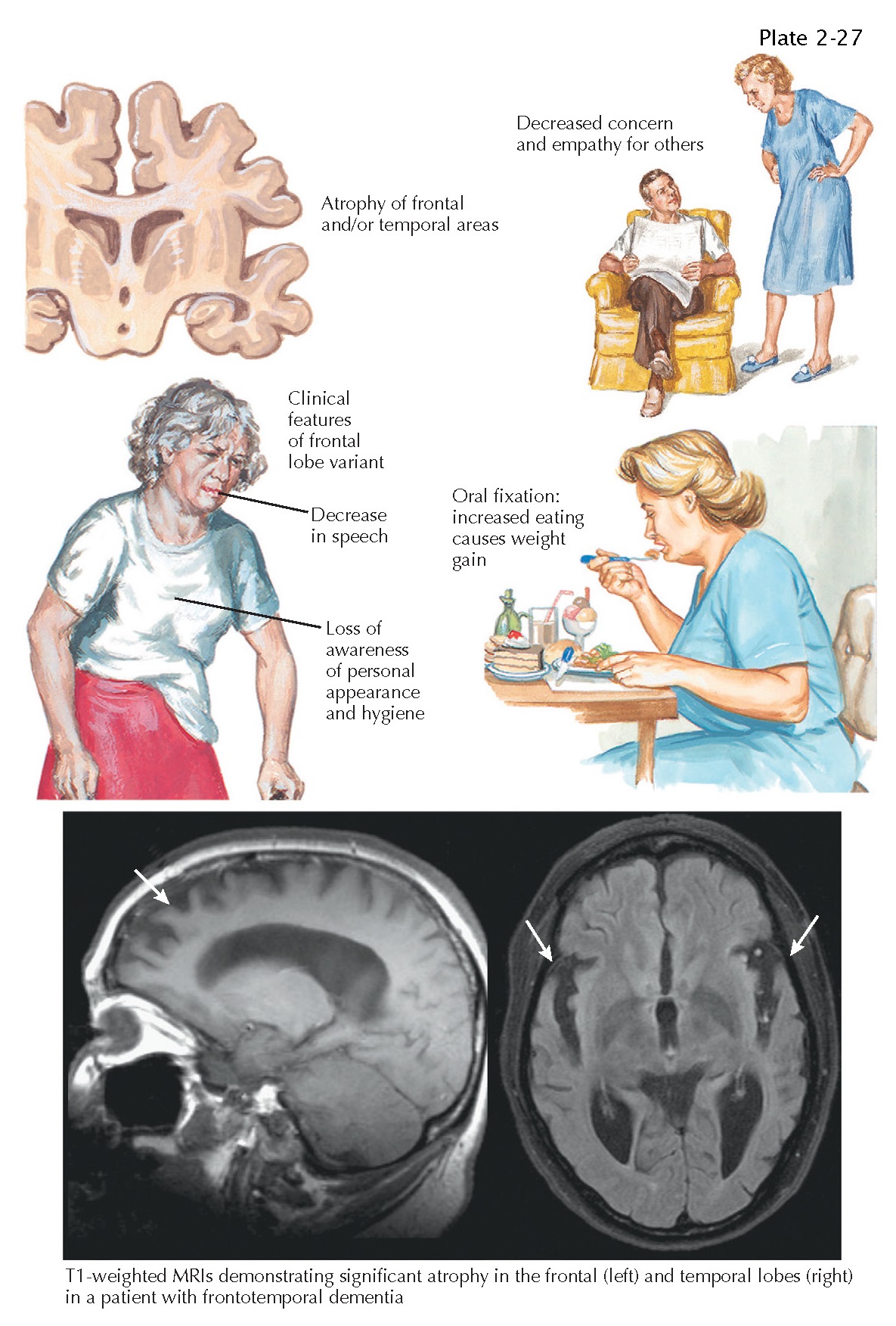 The language presentation of FTD varies, depending on the distribution of the pathology and includes disturbances in speech fluency and comprehension. Broca’s area is located in the inferior and middle gyri of the left frontal lobe and is involved in generating articulation sequences that transform thoughts into statements. Neurodegeneration affecting Broca’s area results in progressive nonfluent aphasia that is characterized by loss of fluent speech and prominent anomia. The speech may have a halting quality due to frequent pauses for word-finding. Circumlocutions are common, because the patient has difficulty retrieving the concise words and substitutes other words or statements for the desired word. Wernicke’s area in the left temporoparietal junction mediates the sensory associations encoding word meaning. Neurodegeneration affecting this region results in semantic dementia, marked by early impairment in semantics (word meaning), resulting in empty, fluent speech and a loss of speech comprehension. Speech may be effortless and without hesitancies, but little meaningful information is conveyed. These patients have prominent comprehension problems (i.e., following commands) despite their fluent and effortless speech. Because the language network prominently involved (Wernicke’s area) abuts the visual association networks, semantic dementia may also be associated with complex visuoperceptual dysfunction, such as prosopagnosia and visual object recognition.