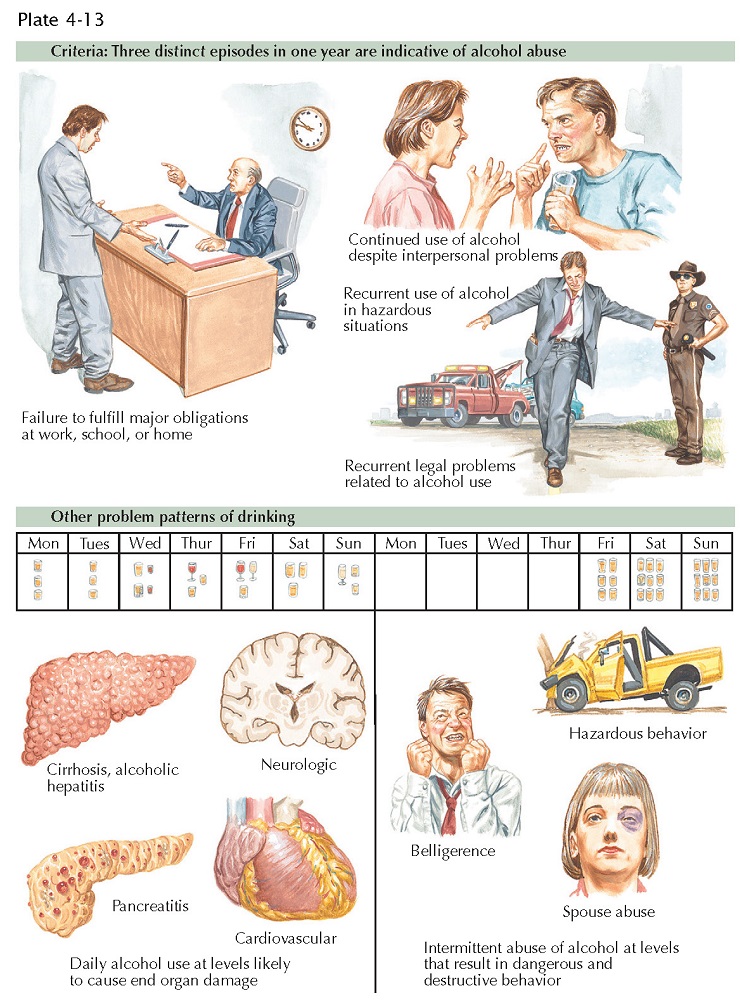 Alcohol use is associated with 1.8 million deaths annually; global alcohol use is increasing. Yet many who drink alcohol do not experience negative health or social consequences, and some health-care studies suggest health benefits may be associated with alcohol consumption. How can we distinguish between risky drinking and safe drinking? The National Institute on Alcohol Abuse and Alcoholism (NIAAA), dedicated to providing scientific leadership in the assessment of alcohol use and its health and social consequences, has established gender-specific guidelines based on current evidence for “low-risk” drinking. To normalize these guidelines, a “standard drink” is defined as an ethanol alcohol content of 14 grams (equivalent to 12 ounces of beer, 5 ounces of table wine, or 1.5 ounces of liquor). It is considered “low-risk” for healthy adult men under age 65 years to consume no more than 14 standard drinks per week, with up to 4 drinks per day, and for healthy adult nonpregnant women under age 65 years and healthy men and women age 65 years and older, no more than 7 standard drinks per week and up to 3 standard drinks per day.

The following risk factors may increase the potential negative health consequences of drinking even with “low-risk” patterns of consumption: (1) first-degree relative with alcohol or drug dependence (i.e., heritable risk for developing an alcohol use disorder), (2) history or family history of mental illness, (3) history or family history of cancer, and (4) any concern about how alcohol affects you personally. Conditions wherein no amount of alcohol is established as safe or any amount of alcohol is established as harmful include (1) pregnancy, (2) age younger than 21 years, (3) operating a vehicle or other machinery, (4) taking medications interacting with alcohol, and (5) having active physical or mental health symptoms.

Alcohol use disorders are defined by the Diagnostic and Statistical Manual of Mental Disorders (DSM-IV) as alcohol abuse and alcohol dependence; DSM-V (in preparation) will update this to one category—alcohol use disorder—defined by a spectrum of severity. The cardinal aspect of an alcohol use disorder is loss of control or self-regulation over one’s alcohol intake, resulting in negative functional consequences in health, safety, occupational performance, and social/family roles. Although alcohol dependence used to be thought of as a naturally progressing disease known as “alcoholism,” NIAAA research has refined this profile into five phenotypic subtypes of alcohol dependence based on data from large national community survey studies. These subtypes are briefly described below and represent typical patient presentations (excluding geriatric presentation of alcohol dependence, which typically involves a prominence of alcohol-related health consequences, cognitive deficits, and loss of independent self-care and functioning).

Young Antisocial (21%). Mid-20s with high rates of co-occurring drug use (>75% smoke cigarettes and cannabis), with strong family alcohol dependence histories. Onset of drinking begins in youth, which may in part account for the severity of alcohol dependence at a young age. Co-occurring mental illnesses are common (depression, anxiety, and personality disorders). One third actively seeks treatment. This group is of particular importance for pediatrician- and school-based screenings for substance use.

Functional (19.5%). Typically, these are well-educated, middle-aged individuals with stable jobs and relationships, colloquially referred to as “high-functioning alcoholics.” A lack of prominent negative consequences to drinking creates a strong vulnerability to denial of illness and lack of incentive for seeking treatment; thus medical screening for alcohol-related problems is important to engage them in treatment. About half smoke cigarettes, one third have strong family histories of alcohol dependence, and one quarter have a lifetime history of depression.

Intermediate Family (19%). This group of middle- aged individuals, half of whom have a lifetime history of depression and strong family histories of alcohol dependence, has high rates of co-occurring mental illness and drug use, and the majority smoke cigarettes. Despite overt problems with functioning, only 25% actively seek treatment for drinking. This group frequently presents for psychiatric care where screening for substance use is critical to diagnosing alcohol dependence.

Chronic Severe (9%). This group of middle-aged individuals has early age onset of drinking, high rates of co-occurring mental illness and drug use, and high rates of antisocial personality disorder and criminal behavior with legal consequences. Two thirds will actively seek treatment due to prominent negative consequences of drinking.