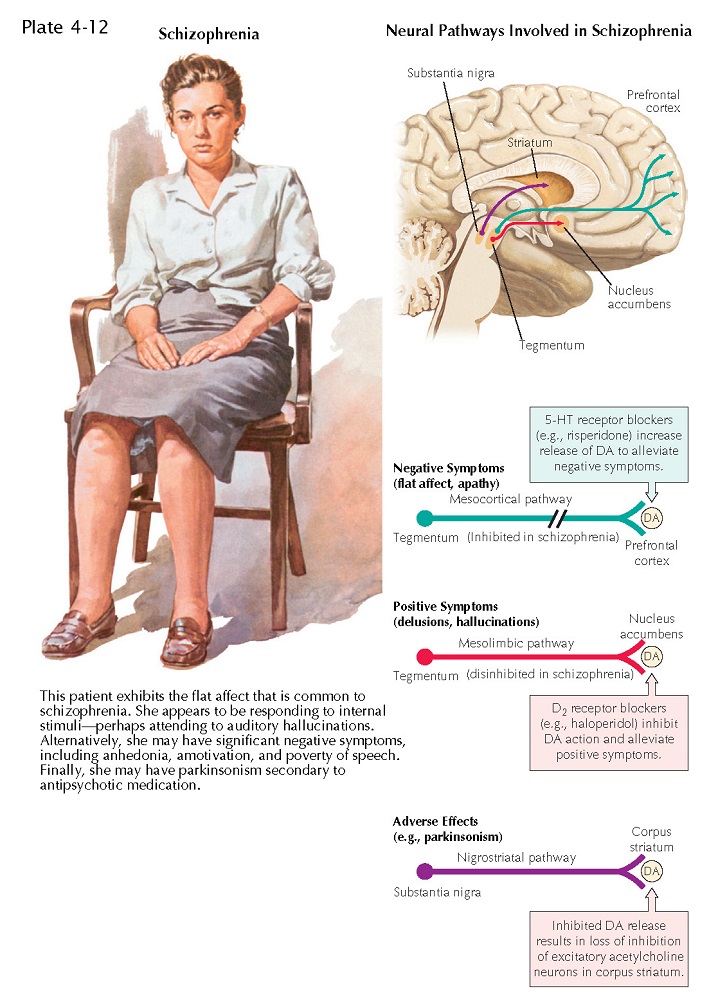 Schizophrenia is the prototype of a psychotic disorder, with the core symptoms of delusions and hallucinations as well as disorganized speech. Some patients also display prominent psychomotor disturbances, including catatonia. Together, these florid and often dramatic symptoms are referred to as positive symptoms and contrasted with negative and cognitive symptoms, the latter being responsible for much of the disability that characterizes schizophrenia. Negative symptoms are categorized into a reduced emotional expressivity cluster (restricted or flat affect) and an avolition/apathy/ anhedonia cluster. Many schizophrenia patients struggle with cognitive impairment in the realms of working memory, attention/vigilance, verbal learning and memory, visual learning and memory, reasoning and problem solving, speed of processing, and social cognition. Schizophrenic patients can often have prominent mood symptoms; these are not inconsistent with a diagnosis of schizophrenia. However, if mood symptoms dominate the overall course of a psychotic illness, a diagnosis of schizoaffective disorder can be given. Schizophrenia is a diagnosis of exclusion; various street drug usage, medications, and medical causes of psychosis must initially be excluded before diagnosis because these can mimic the core symptoms of schizophrenia.

Many patients with schizophrenia experience symptoms that in hindsight are recognized as a prodrome before the onset of their florid psychosis. Unspecific prodromal symptoms (anxiety, depression, social withdrawal) eventually give rise to attenuated psychotic symptoms before schizophrenia declares itself by the onset of psychosis. Because schizophrenia is a syndrome, not all patients experience symptoms from all domains. Schizophrenia is also characterized by a fluctuating illness course, where periods of exacerbation with prominent psychosis alternate with periods of remission.

Schizophrenia has a prevalence of ≈1.5%, with large public health implications due to its onset during young adulthood and persistence throughout life. The typical age at onset is between 15 and 30 years, with onset after age 45 years being rare. Males are 40% more likely to develop schizophrenia than females (ratio of 1.4 : 1) and have an earlier onset. Only about 20% of patients have a good overall prognosis. Patients with schizophrenia often die decades earlier than people in the general population. Its excess medical mortality is partly preventable because modifiable risk factors (i.e., nicotine dependence and the metabolic syndrome) contribute to deaths from cardiovascular disease. Suicide is responsible for 12% of deaths.

Schizophrenia is highly heritable. Other important risk factors for schizophrenia include in utero insults during brain development, such as exposure to infections; obstetric complications; advanced paternal age; social factors, such as urbanicity or immigration status; and early heavy cannabis use.

The neuropathology and pathophysiology of the network dysfunction in schizophrenia remain to be resolved. Critical brain regions involved include frontal cortical areas, particularly dorsolateral pre- frontal cortex, the thalamus, and various limbic and dopaminergic midbrain areas. Although varied developmental pathways can eventually lead to schizophrenia, psychosis emerges as the result of dopamine (DA) dysregulation as a final common pathway.

Schizophrenia can be viewed as a neurodevelopmental disorder that affects brain circuits and develops in stages. A prodromal stage is characterized by beginning, subtle symptoms and role failure; eventually, this results in an active psychosis stage and subsequently gives rise to a stage of chronic disability. According to this model, psychosis is a late symptom. Therefore prevention of this severe outcome requires treatment of target patients at earlier stages.

Antipsychotic medications are the treatment of choice for acute psychosis. After resolution of the initial psychosis, most patients require maintenance treatment with an antipsychotic medication to reduce the likelihood of a psychotic relapse. All antipsychotics are antagonists of dopamine 2 (D2) receptors, and many antipsychotics combine D2 with 5-hydroxytryptamine 2a (5-HT2a) receptor blockade as their basic receptor profile. Despite great differences in individual receptor pharmacologic sites of activity, currently available antipsychotics are equally effective and differ mostly in their propensity toward side effects. Only clozapine is shown to be more effective in treatment-refractory patients with schizophrenia. Problematic long-term side effects of all antipsychotics include tardive dyskinesia and the metabolic syndrome.

Antipsychotics are not effective against all aspects of schizophrenia. Negative and cognitive symptoms, in particular, show little improvement with antipsychotics alone. Instead, the comprehensive treatment of schizophrenia requires integration of pharmacologic treatment with psychologic therapies and concomitant psychosocial rehabilitation. The availability of cognitive-behavioral therapy and cognitive remediation with rehabilitation holds promise for treating persistent symptoms and cognitive deficits.