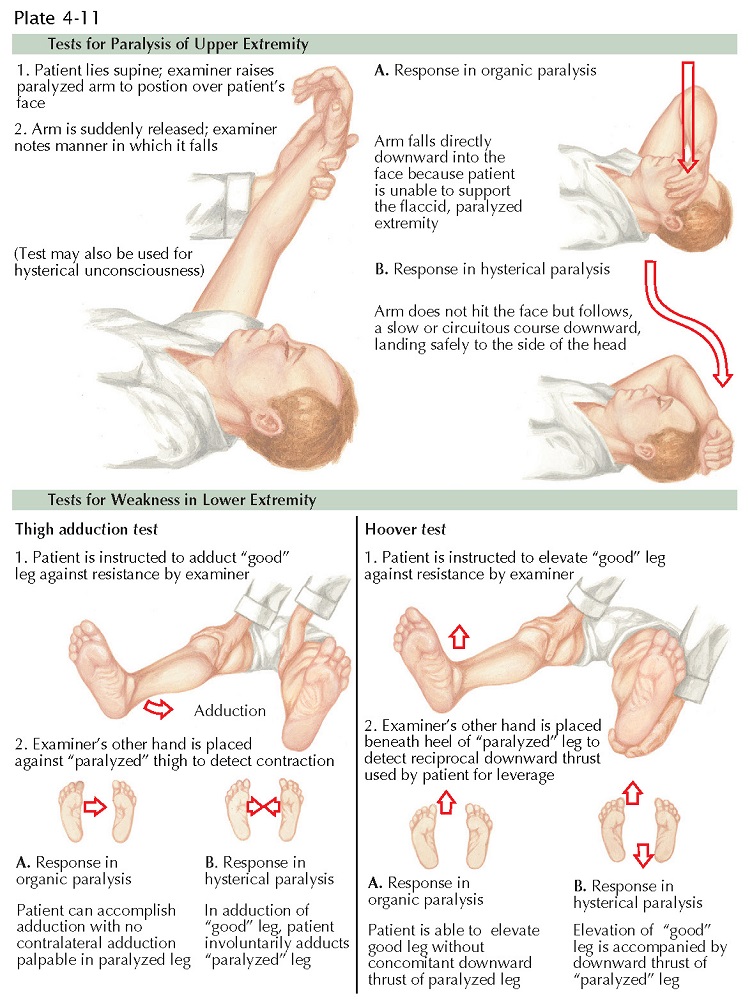 Conversion disorder, previously referred to as hysteria, is defined by the DSM-IV-TR as a type of somatoform disorder with a loss or distortion of a neurologic function that is (1) not explained by an organic neurologic lesion or medical disease, (2) arising in relation to some psychologic stress or conflict, and (3) not consciously produced or intentionally feigned. Despite being thought of as a psychiatric disorder, neurologists predominantly manage and diagnose conversion disorder. Diagnosis requires appropriate neurologic assessment and testing that finds the physical symptoms to be incompatible with neurologic pathophysiology and/ or internally inconsistent to fulfill the first criteria. Criteria two and three are considered more difficult to demonstrate and will be de-emphasized in the diagnostic criteria for conversion disorder in the DSM-V.

Examples of conversion disorder include functional limb weakness and paralysis, tremors, anesthesia that does not follow nerve distributions or dermatomes, vision deficits that are incongruent with anatomically possible visual field deficits, nonepileptic seizures (pseudoseizures) having a normal electroencephalogram (EEG) during events, deafness, amnesia, and abnormal movements. Focused physical examination can elicit findings that highly suggest diagnosis of conversion disorder. Functional leg weakness is demonstrated with Hoover’s sign (as in this plate), where weakness of hip extension resolves during contralateral hip flexion against resistance. Patients with astasia-abasia exhibit an unusual and dramatic gait disturbance, lurching wildly in various directions, and falling only when a nearby physician, family member, or soft object will catch them. Functional tremors may be suspected when the tremor resolves or develops the same frequency during voluntary rhythmic movement of the unaffected arm (entrainment). An overall pattern is that symptoms typically become worse with attention and can lessen or disappear with distraction.

Conversion disorders represent 1% to 4% of all diagnoses in general hospitals throughout Western countries. It is estimated that 30% to 60% of outpatients in neurologic clinics in the United Kingdom have medically unexplained symptoms. Similar to other somatoform disorders, patients with conversion disorder have symptoms that cause significant impairment and high use of health care, leading to elevated costs and poor quality of life. In addition, some treating physicians tend to have a negative bias toward these patients because of difficulty distinguishing conversion disorder from malingering and other factitious disorders. Coupled with a deficiency in medical training in how to approach and appropriately manage patients with conversion disorder because of health-care providers’ discomfort, patients tend to feel dissatisfied with care and seek multiple providers without resolution, leading to inefficiency in the system.

The term “conversion” implies a mechanism whereby psychologic stress is converted into bodily symptoms unconsciously. However, the mechanism is largely unknown and poorly understood. Hypotheses historically have focused around anosognosia, the distortion between performance and awareness of performance that is believed to stem from an altered state of self- consciousness or altered awareness of a bodily state.

Imaging techniques provide a means to study potential neurologic mechanisms involved in conversion disorder. However, these studies are limited by small patient numbers and difficulty controlling for confounding variables. Functional neuroimaging has revealed decreases in activity of frontal and subcortical circuits involved in motor control in hysterical paralysis, decreases in somatosensory cortices during hysterical anesthesia, and decreases in visual cortex during hysterical blindness. In addition, activation has been shown in limbic regions such as the cingulate and orbitofrontal cortices. These findings suggest that conversion disorder may involve modulation of sensorimotor representations by primary affective or stress-related factors.

The majority (50% to 60%) of conversion symptoms spontaneously remit within 2 years of onset, and only 3% of younger patients (<27 years old) have symptoms for more than 1 month. Cognitive-behavioral therapy leads to rapid remission and is considered more effective than pharmacologic approaches, although antidepressants may have a role. Young age, sensory rather than motor symptoms, acuteness of presentation, association with a stressful event, good premorbid health, good socioeconomic status, and absence of comorbidities (psychiatric or medical) are associated with a favorable prognosis. The presence of concurrent depression and/or personality disorders is associated with more chronic handicap.

Conversion disorder raises interesting questions about the relationships between the body and the mind, but additional studies and research are needed to further understand the underlying cause and potential treatments and may improve understanding of normal attention and volition. For now, emphasis should be placed on confirming the diagnosis clinically by presence of positive symptoms, placing less emphasis on psychologic factors and whether or not the patient is feigning the illness.