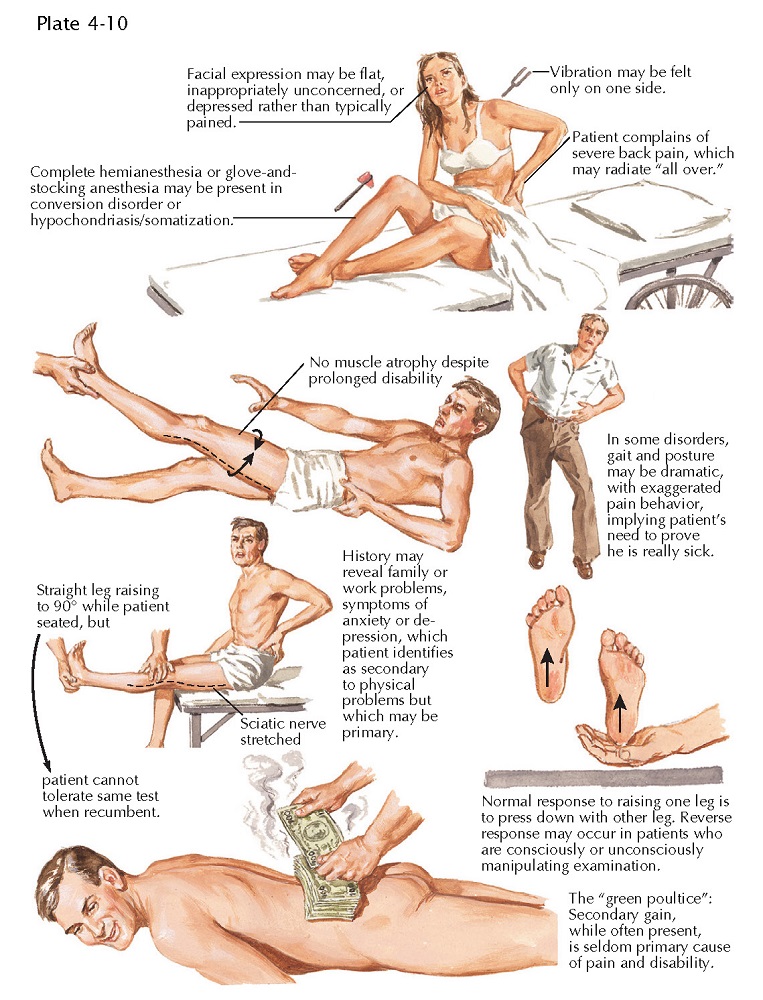 Somatization is one of six major somatoform disorders identified by the American Psychiatric Association’s Diagnostic and Statistical Manual (DSM). Other somatoform disorders include undifferentiated somatoform disorder, conversion disorder, hypochondriasis, pain disorder associated with psychologic factors, pain disorder associated with both psychologic factors and a general medical condition. Fundamentally, somatization is a constellation of physical symptoms lacking medical explanation. The DSM-IV-TR designates eight symptom requirements for diagnosis, including four bodily pain symptoms, two gastrointestinal (GI) symptoms, one neurologic symptom, and one sexual symptom, resulting in impairment in function. However, these symptoms appear to exist along a spectrum, and the current diagnostic categorization may not accurately reflect the clinical presentation. Therefore the status and characterization of somatoform disorders are being reexamined for the soon-to-be-published DSM-V, to reclassify them under the general heading of bodily distress syndrome to encompass both psychiatric and nonpsychiatric functional disorders.

Patients currently classified as having somatization disorder present with multiple physical symptoms that range from mild and self-limited to severely disabling. In addition, they express excessive health concerns that are demonstrated emotionally (depression, anxiety), cognitively (rumination on symptoms, poor attention), and behaviorally (treatment seeking, “doctor shopping”). As a result, they suffer from impairments in functioning, and their help-seeking behaviors make them large consumers of health care, most often presenting to primary care and medical specialty clinics. They often mistakenly are diagnosed with fibromyalgia, chronic fatigue syndrome, noncardiac chest pain, and irritable bowel syndrome.

Epidemiologic data suggest somatoform disorder prevalence estimates of 2% to 6% in the general population and 5% to 20% in primary care patients. Rates are greater in the primary care setting because they are actively seeking health care compared with the general population. Most patients with somatoform disorders are women. Despite these high prevalence rates, the somatoform diagnoses rarely are assigned to patients by clinicians. Studies show diagnostic rates of less than 0.01%. It is postulated that reluctance of clinicians to “label” patients, lack of generalizability of the diagnoses to the clinical presentations, and lack of physician familiarity with the complex criteria for diagnosis result in the underuse of the somatoform diagnoses. Deficiencies in treatment, poor reassurance by medical practitioners, and avoidance of the proper diagnosis leads to excessive testing, high health-care utilization, and specialty referrals, all leading to high health-care costs and poor quality of life.

The pathophysiology of somatization and somatoform disorders currently is not well understood. The observed clinical presentations may be due to aberrant functioning in neural pathways via the autonomic nervous system and hypothalamic-pituitary-adrenal axis, in addition to alterations in central processing of sensory input. Other data suggest proinflammatory cytokines, such as interleukin-6 (IL-6) and tumor necrosis factor-alpha (TNF-alpha), can lead to a constellation of behaviors, including exaggerated pain sensitivity (hyperalgesia), sleep disturbances, and fatigue referred to as “sickness behavior.” This constellation is observed in patients having either depression and/or somatoform disorders. Activation of the proinflammatory cytokines by internal and external stressors may lead to sensitization of the central nervous system (CNS) and afferent peripheral nerves and cause altered bodily perceptions. Some back pain patients have primary or exacerbating psychologic factors requiring consideration when examination demonstrates inappropriate, nonanatomic, clinically incongruous findings. Some individuals are polysymptomatic, with multiple work-domestic issues often engraved on a complex history of other non– organic-defined disorders. Examination demonstrates over-reaction, inexplicable inconsistent straight-leg raising difficulty, nondermatomal sensory loss, poorly sustained effort on muscle testing, with inconsistencies between findings on muscle testing and “unobserved” spontaneous activity (i.e., ability to get off the examination couch despite apparently “severe extremity weakness”). The most common mistake while evaluating such patients is inadequate attention to the differential diagnosis. Outright malingering for material gain is usually fairly apparent and should simply be confronted.

Despite the serious magnitude of effects somatization and somatoform disorders have on patients, families, and the health-care system at large, these disorders are seriously understudied. Currently, limited evidence- based treatment and very limited specialized care exists for patients with somatization somatoform disorders. Purely medical approaches to evaluation and treatment by “ruling out” general medical disorders leads to serial negative tests, ineffective interventions, and mutual physician and patient frustration. Of interest, most treatments targeting specific symptoms appear nonessential, although probiotics in the use of irritable bowel syndrome and other GI-focused somatic complaints are sometimes beneficial. The most beneficial treatment uses a combination of pharmacology to target the central nervous system, such as antidepressants, exercise, and cognitive-behavioral therapy. In addition, physicians suspecting a somatoform disorder diagnosis should schedule frequent, time-limited visits to address patient concerns and to provide reassurance.