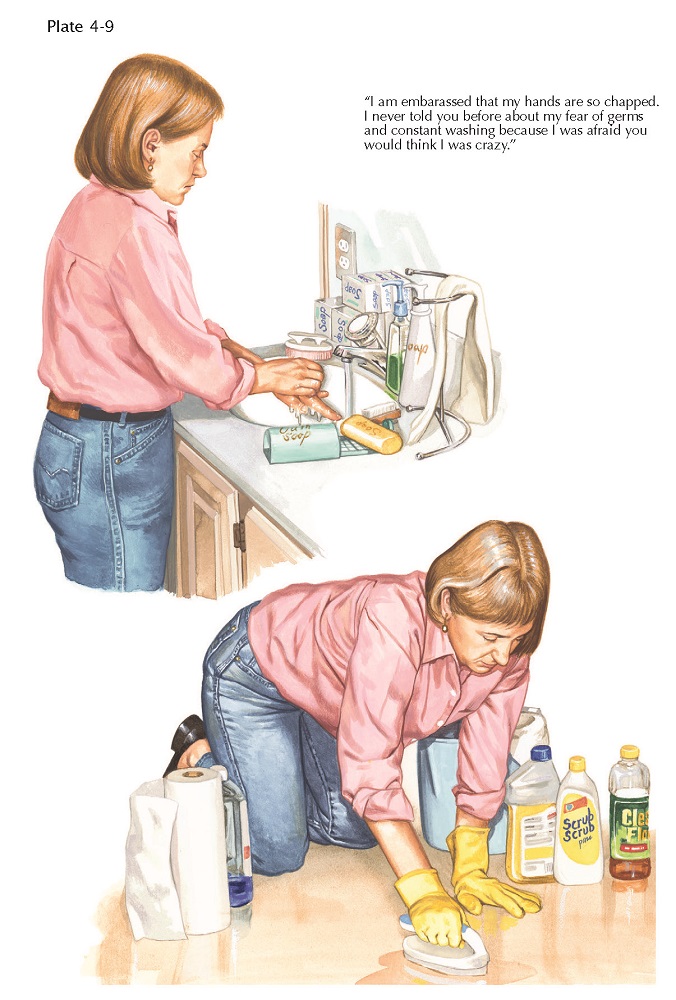 Introduction. Obsessive-compulsive disorder (OCD) is diagnosed on the basis of recurrent and intrusive thoughts, referred to as obsessions, and/or compulsive behaviors or rituals. The obsessions or compulsions are recognized by the patient, at least at some point, as excessive and unreasonable, leading to marked distress or functional impairment; they may be extremely time- consuming. These symptoms are experienced as intrusive and inappropriate and are not simply excessive worries about real-world concerns.

Multiple subtypes of OCD are identified primarily based on factor analysis. Typical obsessions may include fears of contamination, sexual/religious or other moral transgression, harming others, or unrecognized illness. Compulsions may include hoarding, checking, cleaning, and ordering. Of these, the most common symptom is checking behavior, seen in nearly 80% of cases, followed by hoarding behavior. Patients may, for example, check repeatedly that the stove is turned off, re-read paragraphs for typographic errors, or contact family members to confirm that they are healthy. Of importance, such behavior does not occur once, but may persist for hours at a time. Hoarding often involves newspapers, receipts, or other documents, to the point that patients’ homes may become cluttered and even unsafe. Of note, compulsions may be mental rituals as well: needing to count or recite a prayer to prevent a catastrophic event, for example. OCD is highly comorbid with other psychiatric disorders, particularly anxiety disorders, mood disorders (particularly bipolar disorder), and substance use or impulse control disorders. OCD is sometimes observed in individuals with Tourette syndrome).

Epidemiologic studies indicate a lifetime prevalence of ≈2% among the general population, with 1% reporting symptoms in the past 12 months. Subthreshold symptoms may be far more common, with up to one quarter of respondents reporting some lifetime obsessions or compulsions. Mean onset age is between 19 and 20 years, but up to one quarter of males may have onset before age 10 years; female incidence increases in adolescence. New cases are rarely observed after age 35 years. Twin and family studies suggest that OCD is a heritable disorder, particularly childhood-onset OCD, with between 45% and 65% of liability due to inherited risk.

Clinical Presentation. OCD symptoms are generally chronic and contribute to substantial functional and social impairment, although their severity may fluctuate over time. Treatment for OCD typically relies on either cognitive-behavioral therapy, medication treatment, or both; the individual treatments have similar effect sizes. Most commonly selective serotonin reuptake inhibitors or the tricyclic antidepressant clomipramine are prescribed; these medications may require greater dosages and longer treatment durations (i.e., 12 weeks or more) to achieve response, compared with the treatment of other psychiatric disorders. A variety of next-step pharmacotherapies are under active investigation. An emerging treatment for refractory OCD is deep-brain stimulation in regions such as the subthalamic nucleus. Pathophysiology. Imaging and other studies implicate corticostriatal-thalamic circuits in the pathophysiology of OCD symptoms, but recent investigation suggests a somewhat broader network. Functional imaging has particularly focused attention on caudate, orbitofrontal cortex, and anterior cingulate cortex. In one model, intrusive thoughts are associated with increased activity in orbitofrontal cortex, whereas the sense of anxiety is associated with activation of anterior cingulate cortex. Investigation of OCD is facilitated by the availability of mouse models with OCD-like symptoms, particularly excessive grooming behavior. Despite the efficacy of serotonergic antidepressants in this disorder, the role of glutamatergic neurotransmission is receiving increasing focus based on animal studies and genetic data.