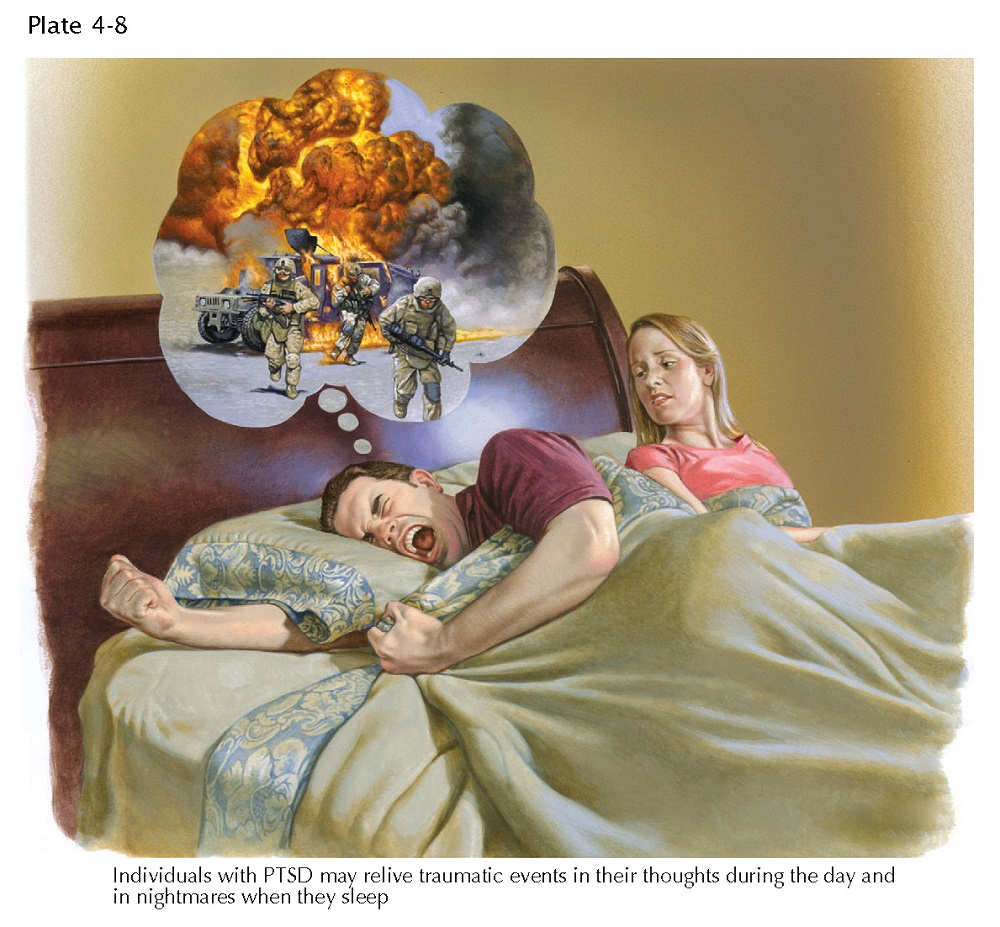 Posttraumatic stress disorder (PTSD) is a mental disorder that develops in response to a traumatic event, such as a sexual assault, military combat, natural disaster, or a serious accident. PTSD is characterized by three clusters of symptoms: (1) reexperiencing symptoms wherein the patient relives the trauma in his or her thoughts and dreams and cannot get it out of his or her mind; (2) avoidance and numbing symptoms wherein the patient avoids people, places, and anything that reminds her or him of the trauma and shuts off his or her emotional responses; and (3) hyperarousal symptoms that involve difficulty concentrating, constantly feeling on-guard and in danger, difficulty sleeping, and irritability. To be diagnosed with PTSD, the patient must report that the traumatic event was accompanied by feelings of helplessness and horror, these symptoms must occur for at least a month, and they must interfere with the patient’s ability to function in daily life.

PTSD is distinct from other common mental dis- orders in that trauma exposure is a prerequisite for diagnosis. Threatening events initiate the body’s “fight- or-flight” response via the hypothalamic-pituitary-adrenal axis and the locus ceruleus and noradrenergic system. These systems have important reciprocal inter-connections with the amygdala and hippocampus, limbic structures involved in fear conditioning and memory consolidation, and with prefrontal brain structures necessary for extinction of fear memories and reward motivation. Initially, this neurobiologic stress response is considered adaptive; it mobilizes energy, increases vigilance and focus, facilitates memory formation, and depresses the immune response. When the acute threat has passed, an elaborate negative feedback system will return the body to homeostasis. However, in some individuals, this acute adaptive response to threat becomes persistent and pathologic.

Although a majority of adults will experience at least one traumatic event in their lifetime, only a minority develop PTSD; the lifetime prevalence of PTSD in the United States is estimated at 6.7%. The disorder is twice as common in women as in men. Although many individuals will experience some PTSD symptoms in the immediate days and weeks following a trauma, only a minority of individuals show the persistent symptoms required for the PTSD diagnosis. Uncontrollable and threatening events, such as rape, childhood abuse, and military combat, are consistently associated with the highest risk for developing PTSD after an event. The risk of developing PTSD is less than 50% even for severe events such as a forcible rape. This contrast between trauma exposure and PTSD prevalence has driven the search for risk and protective factors for the disorder. Extant research suggests pretrauma characteristics, such as family and personal history of psychopathology, child-hood adversity, and low cognitive ability; trauma-related factors, such as type of event, perceived life threat, and peritraumatic psychologic response; and posttrauma factors, such as social support, all play a role determining who develops the disorder. There are three studies that suggest that PTSD is moderately heritable and that genetic factors influence who develops the disorder.

The disorder becomes chronic (i.e., lasts for more than 3 months) for almost 50% of those who meet diagnostic criteria; these patients can benefit from treatment. The treatment of choice for PTSD is primarily trauma-focused cognitive-behavioral therapy and possibly pharmacotherapy. Two types of cognitive-behavioral therapy, prolonged exposure and cognitive processing therapy, were specifically developed for the treatment of PTSD. Both techniques are based, to some degree, on a conceptualization of PTSD as a disorder of failure to recover from the traumatic event due to avoidance of the traumatic event, per se, including thoughts, feelings, places, and people associated with the memory. Prolonged exposure therapy targets avoidance through having the patient reexperience the memory of the traumatic event and engaging with, rather than avoiding, reminders of the trauma both in and outside the therapy session. Cognitive processing therapy targets the avoidance issue by addressing erroneous beliefs about the causes and consequences of traumatic events. A primary focus of cognitive processing therapy is to use cognitive techniques to help patients gain an understanding of the event, per se, and subsequently modify the meaning attributed to their traumatic event. Prolonged exposure and cognitive pro- cessing therapy are similarly effective for treatment of PTSD. The only U.S. Food and Drug Administration (FDA)-approved pharmacologic agents for the treatment of PTSD are the SSRIs sertraline and paroxetine, and the evidence for their effectiveness in treatment PTSD is inadequate. Pharmacologic augmentation of trauma-focused cognitive-behavioral therapy is the focus of ongoing research.