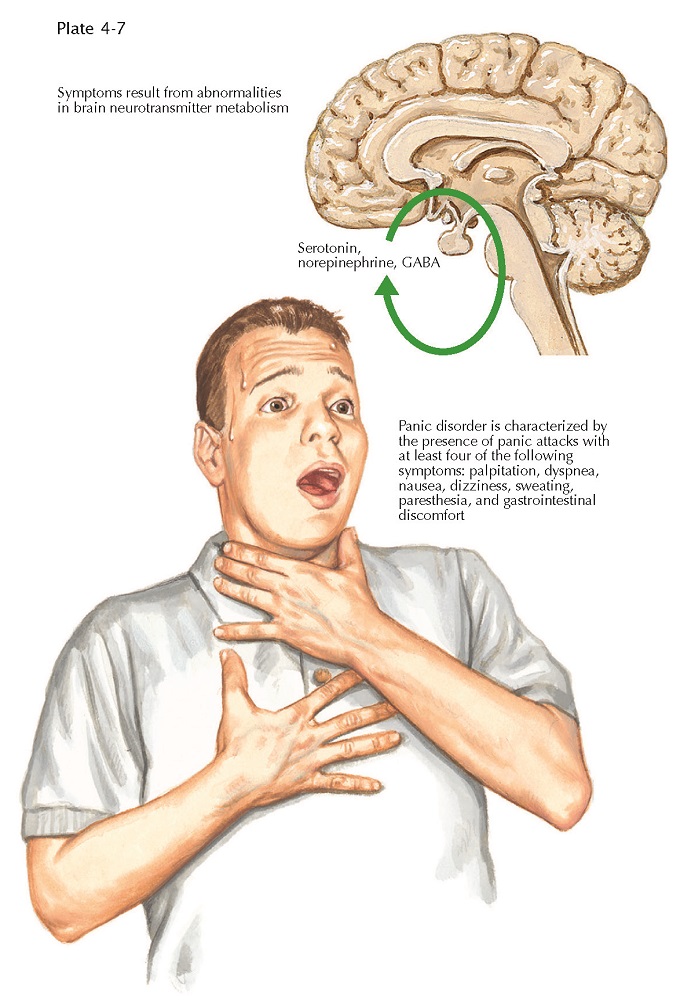 Patients complaining of panic often describe a dramatic presentation, including the sudden, unexpected onset of extreme fearfulness or alarm, quickly rising to a crescendo within minutes of commencement, and accompanied by a spectrum of physical, behavioral, and cognitive symptoms. These may include the bodily sensations of choking, chest pain, trembling, flushing, and rapid heart rate, which mimic a sympathetic, “fight or flight” response. The urge to escape, to find shelter, or to seek help can be overwhelming. Panic victims may believe they are dying, losing control, or going crazy and will often seek urgent medical care. The indelible, negative impression left by a panic attack often results in persistent fear of having another attack or in marked behavioral changes. Although isolated panic attacks are relatively common, it is these persistent sequelae that define the diagnosis of panic disorder. By DSM-IV criteria, this disorder may also be accompanied by agoraphobia, characterized by the phobic avoidance of situations that may be difficult or embarrassing to escape, should a panic attack recur.

Panic disorder is common, with a lifetime prevalence in the United States of up to 5%. The disorder occurs nearly twice as often in women and tends to manifest in early adulthood. Comorbid substance use disorders and psychiatric illness are very common; major depressive disorder occurs in nearly two thirds of patients with panic disorder. These comorbid conditions, if left untreated, may exacerbate the symptoms of panic or make treatment more difficult. Of particular concern, panic disorder is associated with higher risk for suicide. Of interest, the onset of panic disorder is often related to a stressful life event. Although most patients experience some remission of symptoms over time, the course of panic disorder is chronic for the majority of affected individuals. Complications can include persistent anxiety symptoms, mood disorders, phobic avoidance, drug and alcohol use disorders, and significant impairments in functioning and quality of life.

The differential diagnosis of panic disorder includes a broad list of cardiac, respiratory, endocrine, metabolic, and drug-related causes, as well as other psychiatric conditions that may include panic attacks. Individuals with panic attack often present for treatment initially at emergency departments or in primary care settings, and although the classic presentation of panic attack may be familiar to most practitioners, a careful consideration of possible organic causes must be undertaken. A personal or family history of anxiety and recent stressful life events may suggest a primary anxiety disorder.

Early family studies of panic disorder have demonstrated a higher risk in first-degree relatives of probands; twin studies estimate the heritability of anxiety disorders to be 20% to 40%. Although these studies suggest that genetic factors play a role, the investigation of particular genetic risk factors is complicated by the high level of comorbidity with other anxiety and depressive disorders. Explanatory neurobiologic models emphasize the role of neural circuits, including the amygdala, its related structures, and hypothalamus. Hypothesized abnormalities in the serotonergic, noradrenergic, and gamma-aminobutyric acid (GABAergic) neurotransmitter systems are supported by the efficacy of pharmacologic treatments aimed at these systems (e.g., SSRIs, SNRIs, and benzodiazepines).

During the early stages of presentation, before phobic avoidance or recurrent attacks begin, a patient may respond well to reassurance, education, and supportive psychotherapy. Once phobic avoidance or recurrent attacks begin, the aims of treatment are both to prevent further panic attacks, and to eliminate the associated avoidance and anticipatory anxiety. Pharmacologic treatment for panic includes antidepressants; placebo-controlled trials support the efficacy of SSRIs, the SNRI venlafaxine, and the tricyclic antidepressant imipramine. Benzodiazepines provide rapid symptomatic relief, and may be prescribed alone or together with antidepressants. Cognitive-behavioral therapy (CBT) for panic disorder is validated and studied widely, proving effective whether delivered in individual or group therapy settings. CBT conceptualizes panic as the acquired fear of the bodily sensations associated with autonomic arousal, and agoraphobia as the behavioral response to the anticipation of such sensations. Therapists teach cognitive and somatic coping skills that are then used to manage anxiety during exposure to feared situations and bodily sensations. Multiple studies and meta-analyses show that the combination of both medication and psychotherapy is more effective in treating panic than either therapy alone.