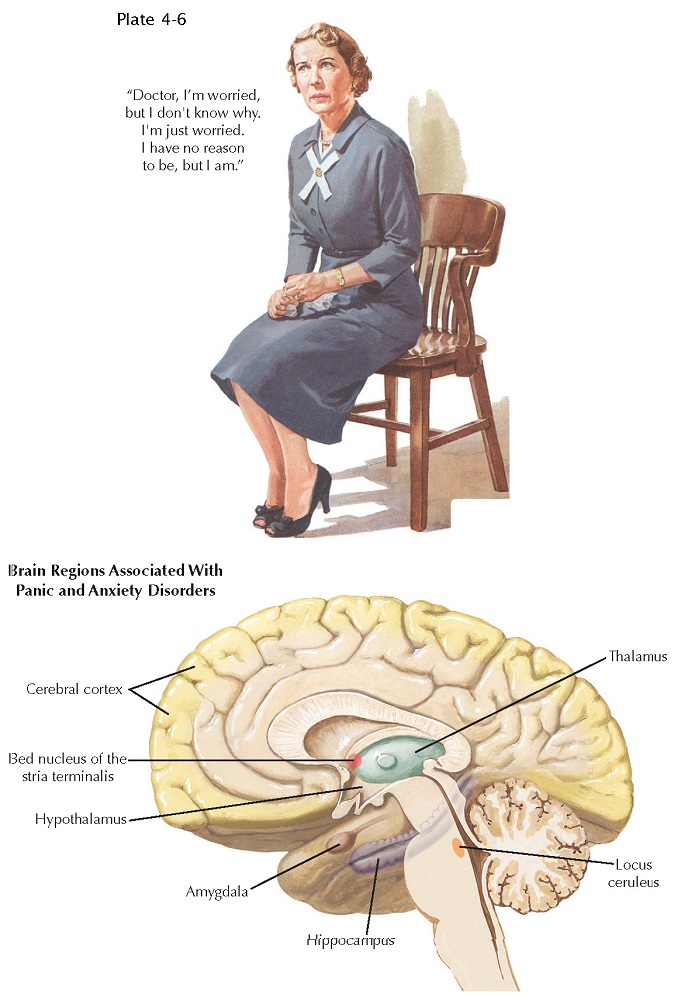 Introduction and Clinical Presentation. Social anxiety disorder (SAD), or social phobia, is characterized by persistent fear of social or performance situations in which an individual will face exposure to unfamiliar people or scrutiny by others. The individual typically fears behaving in an embarrassing or humiliating fashion, or revealing symptoms of anxiety. Exposure to these situations provokes anxiety or panic symptoms, leading the individual to avoid such situations whenever possible. Physical symptoms may include diaphoresis, tachycardia, trembling, nausea, flushing, and difficulty speaking, for example.

DSM-IV criteria stipulate that this condition contributes to significant functional impairment (for example, in work or relationships) or distress. Of note, the individual recognizes that the fear is excessive or unreasonable. Although the diagnosis has been criticized for ascribing a medical diagnosis to a normal population trait, shyness, the persistence and severity of these symptoms—and in particular their impact on functioning—argues otherwise.

Diagnostic criteria distinguish a generalized form, that is, occurring in most social situations, or a specific form, that is, one which occurs only in particular circumstances, such as public speaking or public performance, or writing or eating in front of others. However, these are not necessarily distinct subtypes, although the generalized form may be more disabling overall.

Epidemiology. The lifetime prevalence of SAD is ≈12%, with 12-month prevalence of ≈7%. SAD often has early onset, with about half of cases presenting by age 11 years; on the other hand, later onset in many patients provides further support for SAD being some-thing other than the trait of shyness. As with major depressive disorder, SAD is seen more commonly in females. As with other psychiatric disorders, rates of comorbidity are high, having overlap with major depression and substance use disorder, for example.

Treatment of SAD relies on either cognitivebehavioral therapy, delivered individually or in a group setting, or pharmacotherapy. Standard medication treatments use selective serotonin reuptake inhibitors, although other antidepressants, including monoamine-oxidase inhibitors and serotonin-norepinephrine reuptake inhibitors have also demonstrated efficacy. Anxiolytic medications, such as benzodiazepines, are sometimes used as well. Scales such as the Liebowitz Social Anxiety Scale may be used to quantify severity over time.

Pathophysiology. SAD has been noted to be familial, and often coaggregates with major depression, panic disorder, and agoraphobia. Twin studies suggest that about 40% of liability is inherited. Although candidate gene studies have implicated multiple genes, no single association has been convincingly demonstrated, and genome-wide studies have not been reported. The potential role of neuropeptides involved in social cognition, such as oxytocin and arginine vasopressin, is also under active investigation. For example, rodent models illustrate the capacity of oxytocin to diminish social avoidance, which may inform future treatment development in SAD.

Functional magnetic resonance imaging (fMRI) implicates the amygdala and insula activation in SAD, for example, on tasks requiring processing of emotional faces. fMRI also suggests there may be abnormal connectivity evident in the resting state, involving frontal and occipital structures. Other studies also suggest basal ganglia dysfunction in SAD; of interest, SAD is seen more commonly in individuals with Parkinson disease, which may provide convergent evidence for the role of basal ganglia in these symptoms.