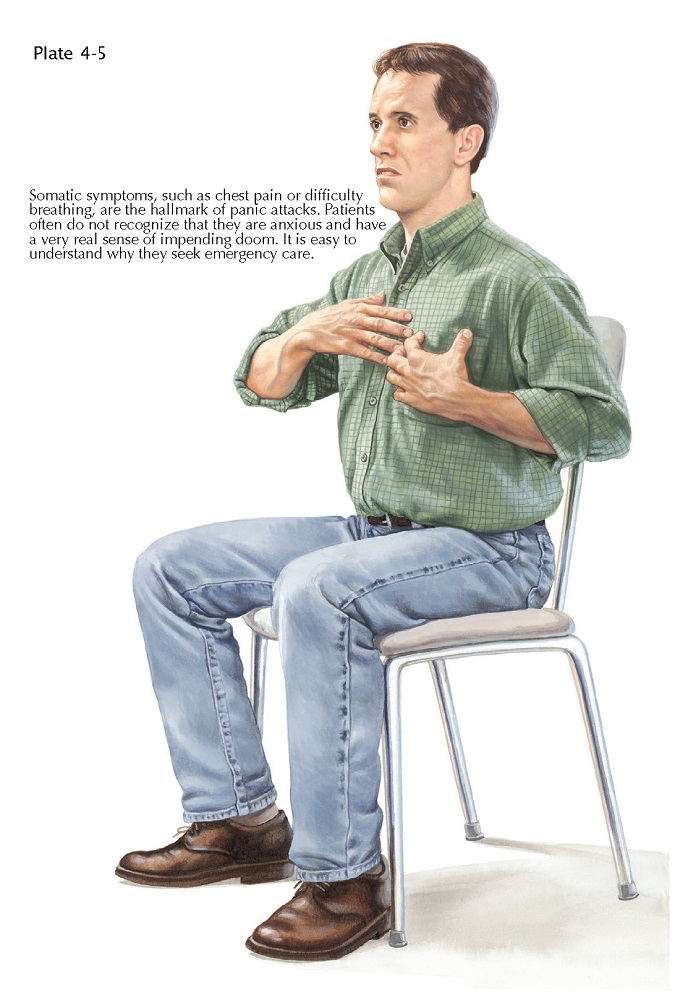 Generalized anxiety disorder (GAD) is characterized by excessive, uncontrollable, and often irrational worry, about everyday things that is disproportionate to the actual source of worry. To diagnose GAD, excessive worry must be present for at least 6 months, the person finds it difficult to control the worry, and the anxiety and worry are associated with three (or more) out of six symptoms. These include (1) restlessness or feeling keyed up or on edge, (2) being easily fatigued, (3) difficulty concentrating or mind going blank, (4) irritability, (5) muscle tension, and (6) sleep disturbance (difficulty falling or staying asleep, or restless unsatisfying sleep). As with other axis I diagnoses, the symptoms must cause clinically significant distress or impairment in social, occupational, or other important areas of functioning and are not due to the direct physiologic effects of a substance (e.g., a drug of abuse, a medication) or a general medical condition (e.g., hyperthyroidism), and do not occur exclusively during a mood disorder, psychotic disorder, or a pervasive developmental disorder.

The prevalence of GAD in the National Comorbidity Survey (NCS) was 1.6% for current GAD (defined as a 6-month period of anxiety that continued in the 30 days before the interview), 3.1% within the previous 12-month period, and 5.1% for lifetime diagnosis. In most epidemiologic studies, the lifetime prevalence of GAD is reported between 3% and 6%, with a higher prevalence in women (2 : 1 female/male ratio). The usual age at onset is variable—from childhood to late adulthood, with the median age at onset being approximately 31 years. There is significant comorbidity associated with other psychiatric disorders (up to 90% of patients meet criteria for another disorder), the most frequent being major depression (up to 60%), dysthymia (40%) alcohol abuse/dependence (38%), and other anxiety disorders (social phobia, agoraphobia, and panic). The presence of comorbid psychiatric disorders has significant negative effects on prognosis. Finally, GAD patients often have multiple medical comorbidities, including migraine, chronic pain, gastrointestinal problems, cardiac, and/or respiratory disorders further complicating assessment and treatment.

GAD may occur in families. Twin studies also suggest that genes are at least partly responsible for the disorder; however, the heritability is modest. The genetic correlation between major depression and GAD is very high. GAD usually begins at an earlier age, and symptoms may manifest themselves more slowly than in most other anxiety disorders. Some people with GAD report onset in early adulthood, usually in response to a life stressor. The clinical course of GAD is often chronic, with 40% of patients reporting an illness lasting more than 5 years. GAD is associated with pronounced functional impairment, resulting in decreased vocational function and reduced quality of life. Moreover, GAD patients are often high users of outpatient medical care, contributing significantly to health-care costs.

Anxiety disorders are thought to result from abnormal processing of threat-related stimuli, as well as functional deficits in brain pathways underlying fear learning and memory. Neuroimaging studies in GAD suggest increased activity in the fear circuitry involving the amygdala, anterior cingulate cortex, and insula, as well as increased activity in the prefrontal cortex, which appears to have a compensatory role in reducing GAD symptoms. Serotonergic, noradrenergic, and gamma-aminobutyric acid (GABA) inhibitory systems dysfunction may relate to expression of GAD. The adrenal system and chronic stress response is also implicated in GAD pathophysiology, with the amygdala mediating arousal and fear by activating the hypothalamic-pituitary-adrenal (HPA) axis. Other putative neuroendocrine mechanisms are currently under investigation. Different classes of antidepressants are efficacious in GAD. Selective serotonin reuptake inhibitors (SSRIs) or serotonin-norepinephrine reuptake inhibitors (SNRIs) are usually used as first choice, with tricyclic antidepressants (TCAs), monoamine oxidase inhibitors (MAOIs) and others, including buspirone and mirtazapine, as other therapeutic options.

Benzodiazepines also provide effective therapies for GAD, having the advantages of a short latency of therapeutic onset and a generally favorable side-effect profile. Major drawbacks include sedation, cognitive impairment, and the possibility of long-term adverse effects (i.e., development of tolerance), physical dependence, and a withdrawal syndrome. Other drugs used in GAD management include pregabalin and sympatholytic agents (propranolol, prazosin, clonidine), and atypical antipsychotics that may have an adjunctive role to antidepressants in cases of treatment resistance. Psychotherapy, in particular cognitive-behavioral therapy, as monotherapy or combined with medications, may also be considered as initial treatment for patients with mild-to-moderate symptoms.