FROZEN SHOULDER
The clinical and anatomic pathology in frozen shoulder is derived from an acute inflammatory synovitis followed by an intracapsular soft tissue fibrosis, resulting in contracture of  the capsule. Some  have  made an analogy of frozen shoulder to Dupuytren contraction in the palmar fascia of the hand. Dupuytren contracture has been associated with myofibroblasts present within the fibrous tissues, and these same cells can be found in the shoulder capsule with frozen shoulder. Frozen shoulder is commonly seen in association with thyroid disorders as well as diabetes. Patients with these associated systemic diseases often have a more severe and refractory clinical course. When associated with thyroid and diabetic changes, the treatment of frozen shoulder is often more difficult. The recovery phase is longer and protracted, and the recurrence rate and the number of treatment failures are higher with both surgical and nonsurgical treatment. 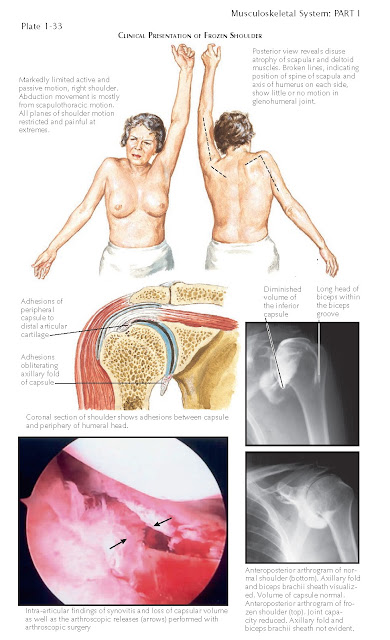 There is a role for intra-articular therapy with a corticosteroid, particularly in the treatment of early stages of frozen shoulder in which there is acute inflammation of the synovium. As the disease progresses through the second stage with more fibrosis and fewer inflammatory changes, corticosteroid injections appear to have less of a clinical effect. Nonsurgical treatment is focused on passive range of motion stretching exercises that should take into account all portions of the capsule and affect all arcs of motion to include forward flexion, abduction, and internal and external rotation exercises. In many cases, the patient’s shoulder symptoms are accompanied by significant pain, and as such the exercise program needs to be performed gently but on a daily basis. Home-based exercise programs instructed by a physical therapist are preferred. Stretching exercises in phase I and phase II are shown later in discussion on rehabilitation. Home exercises should be done daily and frequently for short periods of time. Typically, each exercise session should include five of the types of stretches shown later in the rehabilitation discussion each for 2 minutes, for a total of 10 minutes of exercise at regular intervals at least five times per day. Persistence with this regimen accompanied by good pain management will generally result in significant improvement after 6 to 8 weeks. When pain is diminished and range of motion near 80% of normal, a strengthening program can be added to the overall program and the frequency of the stretching program can be diminished and the length of time for each session increased to 15 to 20 minutes three times each day. 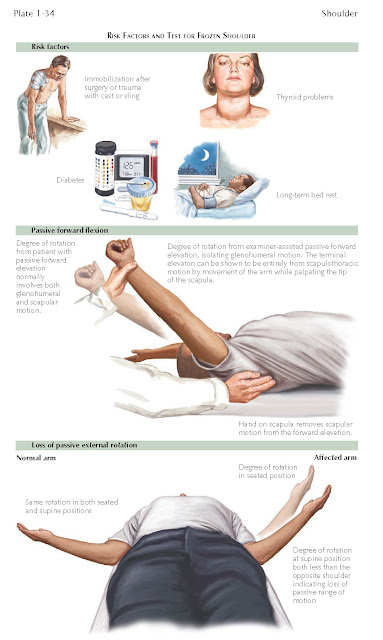 In a small percentage of patients with refractory clinical symptoms associated with significant loss of passive arcs of motion, surgical management can be very effective. Idiopathic frozen shoulder (adhesive capsulitis) is most responsive to both nonoperative and surgicalmanagement as defined previously. Arthroscopic capsule release involving all portions of the capsule is an effective mechanism to release the contracted tissue and allow for ease of movement and postoperative rehabilitation. Postoperative pain management should include consideration of regional blocks. As with all types of treatment, pain management is important and supports an effective postoperative rehabilitation program.

Examination of the frozen shoulder can demonstrate loss of passive range of motion of the shoulder and is best tested in the supine position as shown in Plate 1-34. As the examiner tries to further elevate the arm, the examiner’s hand realizes loss of glenohumeral motion, and the terminal phases of elevation are entirely related to scapular thoracic movement. In addition, loss of passive external rotation can be seen in both the supine as well as the seated position, as shown in Plate 1-34. Motion should be tested for both passive and active range of motion. Loss of active range of motion in the setting of normal passive motion is often related to weakness secondary to r tator cuff function (see Plates 1-38, 1-40, and 1-43).