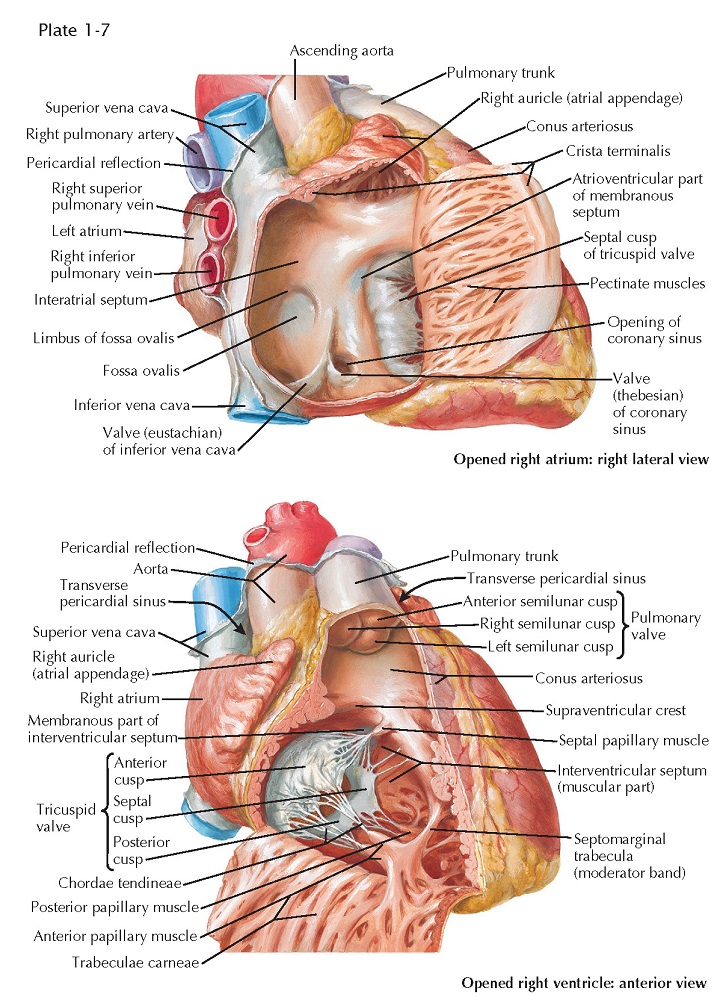 The right atrium consists of two parts: (1) a posterior smooth-walled part derived from the embryonic sinus venosus, into which enter the superior and inferior venae cavae, and (2) a thin-walled trabeculated part that constitutes the original embryonic right atrium. The two parts of the atrium are separated by a ridge of muscle. This ridge, the crista terminalis (see Plate 1-7), is most prominent superiorly, next to the SVC orifice, then fades out to the right of the IVC ostium. Its position corresponds to that of the sulcus terminalis externally (see Plate 1-6). Often described as a remnant of the embryonic right venous valve. the crista terminalis actually lies just to the right of the valve.

The right auricle usually is not well demarcated externally from the rest of the atrium. The right auricle is a convenient, ready-made point of entry for the cardiac surgeon and is used extensively.

The anterior border of the IVC ostium is guarded by a fold of tissue, the inferior vena cava (eustachian) valve, which varies greatly in size and may even be absent. When large, the IVC valve is usually perforated by numerous openings, forming a delicate lacelike structure known as the network of Chiari. The coronary sinus enters the right atrium just anterior to the medial extremity of the IVC valve. The eustachian valve’s orifice may also be guarded by a valvelike fold, the coronary sinus (thebesian) valve. Both IVC valves and coronary sinus valves are derived from the large, embryonic right venous valve.

The posteromedial wall of the right atrium is formed by the interatrial septum, which has a thin, fibrous, central ovoid portion. The interatrial septum forms a shallow depression in the septum called the fossa ovalis. The remainder of the septum is muscular and usually forms a ridge around the fossa ovalis, the limbus fossae ovalis. A probe can be passed under the anterosuperior part of the limbus into the left atrium in some cases, and the foramen (fossa) ovalis is then “probe patent.” Anteromedially, the tricuspid valve gives access to the right ventricle.

The right ventricular cavity (see Plate 1-7) can be divided arbitrarily into a posteroinferior inflow portion, containing the tricuspid valve, and an anterosuperior outflow portion, from which the pulmonary trunk originates. These two parts are separated by prominent muscular bands, including the parietal band, the supraventricular crest (crista supraventricularis), the septal band, and the moderator band. These bands form a wide, almost circular orific with no impediment to flow in the normal heart.

The wall of the inflow portion is heavily trabeculated, particularly in its most apical portion. These trabeculae carneae enclose a more or less elongated, ovoid opening. The outflow portion of the right ventricle, often called the infundibulum, contains only a few trabeculae. The subpulmonic area is smooth walled.

The pulmonary trunk arises superiorly from the right ventricle and passes backward and slightly upward. It bifurcates into right and left pulmonary arteries (see Plate 1-7) just after leaving the pericardial cavity. A short ligament—the ligamentum arteriosum (see Plate 1-8)—connects the upper aspect of the bifurcation to the inferior surface of the aortic arch (arch of aorta; see Plate 1-6). It is a remnant of the fetal ductus arteriosus (duct of Botallo).

The left auricle is a continuation of the left upper anterior part of the left atrium. The auricle’s variable shape may be long and kinked in one or more places. Its lumen contains small pectinate muscles, and there usually is a distinct waistlike narrowing proximally.

The left ventricle (see Plate 1-8) is egg shaped with the blunt end cut off, where the mitral valve and aortic valve are located adjacent to each other. The valves are separated only by a  fibrous band giving off most of the anterior (aortic) cusp of the mitral valve and the adjacent portions of the left and posterior aortic valve cusps. The average thickness of the left ventricular (LV) wall is about three times that of the right ventricular (RV) wall. The LV trabeculae carneae are somewhat less coarse, with some just tendinous cords. As in the right ventricle, the trabeculae are much more numerous and dense in the apex of the left ventricle. The basilar third of the septum is smooth.

Usually there are two stout papillary muscles. The dual embryonic origin of each is often revealed by their bifid apices; each receives chordae tendineae from both major mitral valve cusps. Occasionally a third, small papillary muscle is present laterally.

Most of the ventricular septum is muscular. Normally it bulges into the right ventricle, showing that a transverse section of the left ventricle is almost circular. The muscular portion has approximately the same thickness as the parietal LV wall. The ventricular septum consists of two layers, a thin layer on the RV side and a thicker layer on the LV side. The major septal arteries tend to run between these two layers. In the human heart a variable but generally small area of the septum immediately below the right and posterior aortic valve cusps is thin and membranous.

On sectioning of the septum in an approximately transverse plane, the basilar portion of the ventricular septum, including the membranous septum, is seen to deviate to the right, so that a plane through the major portion of the septum bisects the aortic valve. It must be emphasized that the total cardiac septum shows a complex, longitudinal twist and does not lie in any single plane.