Exposure of the Heart

Exposure of the Heart

Within the pericardium lies the heart, a hollow, muscular, four-chambered organ suspended at its base by the great vessels. In situ the heart occupies an asymmetric position, with its apex pointing anteriorly, inferiorly, and about 60 degrees toward the left. Its four chambers are arranged in two functionally similar pairs, separated from each other by the cardiac septum (see Plate 1-5). Each pair consists of a thin-walled atrium and a thicker- walled ventricle.

The anatomic nomenclature of the heart removes it from the body and places it on its apex, and thus the cardiac septum is in a sagittal plane. This practice has led to misconceptions and difficulties in orientation among cardiologists and surgeons. On a chest radiograph, for example, the left cardiac border is formed by the left ventricle, but the right border is formed by the right atrium, not the right ventricle, which lies anterior. The major and important part of the left atrium lies directly posterior and in the midline in front of the spine and esophagus, allowing the pulmonary veins to be as short as possible.

Superiorly, the pulmonary trunk is seen originating from the right ventricle and leaving the pericardium just before it bifurcates into its two main branches: the right and left pulmonary arteries. To the right of the pulmonary trunk lies the intrapericardial portion of the ascending aorta, the base of which is largely covered by the right auricle (right atrial appendage). The base of the aorta, including the first part of the right coronary artery, is surrounded by lobules of fatty tissue called Rindfleisch folds, the largest and uppermost of which is rather constant. 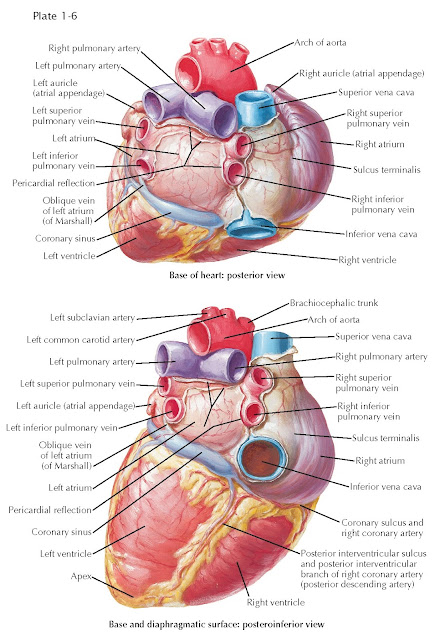 After removal of the heart from the pericardium, its posterior (basilar) and diaphragmatic aspects can be inspected. The superior vena cava (SVC) and inferior vena cava (IVC) enter the right atrium, with the long axis of both cavae inclined slightly forward and the IVC in a more medial position. A pronounced groove, the sulcus terminalis, separates the right aspect of the SVC from the base of the right auricle. As this groove descends along the posterior aspect of the right atrium, it becomes less distinct.

The aortic arch crosses the pulmonary artery bifurcation after giving off its three main branches: the brachiocephalic (innominate), left common carotid, and left subclavian arteries. Variations in this pattern occur and usually are not significant.