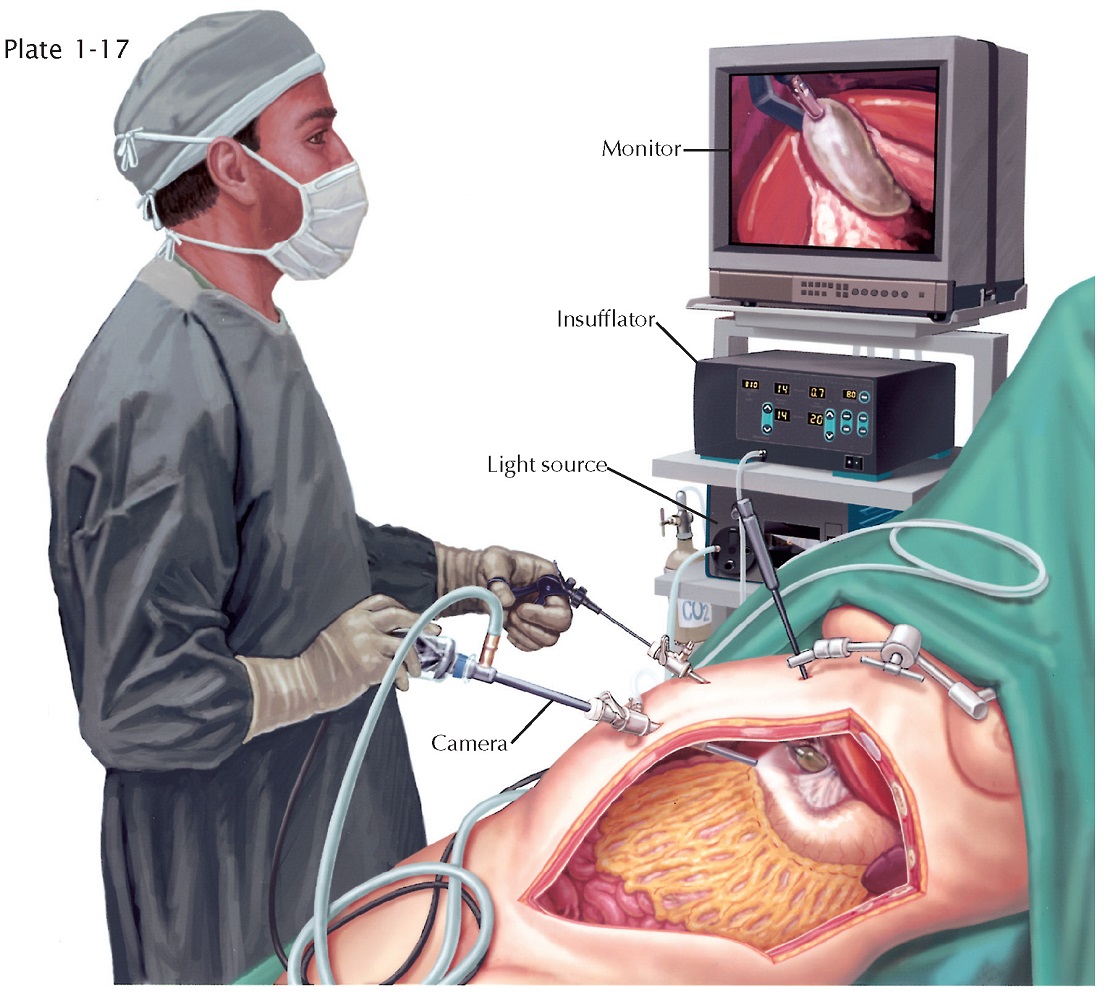 Laparoscopic peritoneoscopy is the direct inspection of the peritoneal cavity and its contents by means of an endoscopic instrument introduced through the abdominal wall. Laparoscopic surgery has revolutionized the field of surgery and has gradually been replacing many conventional surgical procedures. The procedure is used in gastroenterologic, general surgical, and gynecologic disorders in which a positive diagnosis cannot be established by simpler methods. Its value lies in the fact that it can frequently supply information that otherwise would be obtained only by exploratory laparotomy. In addition to being a surgical method, it is particularly valuable as a diagnostic tool for visualizing and obtaining biopsies from peritoneal surfaces, the liver, the omentum, and the small bowel, as well as the pelvic organs. Intraabdominal adhesions, peritoneal carcinomatosis or tuberculosis, ascites, or hemorrhage can readily be recognized and sampled via a laparo- scope. In malignant disease, laparoscopy is useful for staging.

The examination is carried out in an operating room using all aseptic precautions, as one would with open laparotomy. Laparoscopy requires lifting of the abdominal wall from the abdominal organs. The method used by most surgeons is the creation of a pneumoperitoneum by insufflation with carbon dioxide into the peritoneal cavity through a needle or cannula. An alternative to pneumoperitoneum is an abdominal lift device that can be placed through a 10- to 12-mm trocar at the umbilicus. These devices have the advantage of creating little physiologic derangement, but they are bulky and do not allow as much working room as a pneumoperitoneum does.

The first step in the procedure is to establish abdominal access. This is achieved by two methods. The first, closed technique allows the surgeon to place a specialized, spring-loaded Veress needle into the abdominal cavity without damaging the underlying organs. The umbilicus is usually selected as the preferred point of access because, in this location, the abdominal wall is thin, even in obese patients. The abdomen is then inflated with carbon dioxide gas.

The other method is the open (Hasson) technique. With this technique, the surgeon makes a small incision just below the umbilicus and, under direct vision, locates the abdominal fascia. A small incision is made through the fascia and underlying peritoneum. A finger is placed in the abdomen to make certain that bowel is not adherent before insufflation is begun. This technique is preferable for patients who have undergone previous operations that may have caused the small bowel to be adherent to the undersurface of the abdominal wound.

The usual site of initial insufflation is the umbilicus; the primary trocar/laparoscope port is placed at the same site. The locations of multiple other ports are chosen to triangulate the camera and the instruments around a focal point within the abdomen, thereby maintaining optimal access for manipulation of the instruments. Certain areas, such as areas of scarring from prior operations (because of the likelihood of adhesions), the upper right quadrant (because of the round ligament), and the midline of the rectus abdominis muscle (because of the course of epigastric vessels), should be avoided. Alternative access techniques for laparoscopic surgery include single-incision surgery, single-port access, and natural orifice transluminal endoscopic surgery. In single-incision surgery, a single incision is made, usually at the umbilicus, rather than multiple incisions for multiple ports. In natural orifice transluminal endoscopic surgery, a multichannel endoscopic technique is used to reach the peritoneal cavity through the mouth, stomach, vagina, or rectum. This technique is a truly “scarless” operation with minimal pain. Turning the patient on the right side may help to expose the spleen, and applying the Trendelenburg position causes the pelvic organs to become visible.

Laparoscopic peritoneoscopy has proved its value in diagnosing peritoneal tuberculosis and abdominal malignant diseases and determining whether they are operable, in diagnosing hepatobiliary diseases, in identifying obscure abdominal masses, and in diagnosing diseases involving the pelvic organs. The risks of laparoscopy are few but include accidental injury such as air embolism, hemorrhage from a ruptured blood vessel, perforation of a hollow viscus, pneumothorax, and pneumomediastinum. Laceration of the inferior epigastric artery has been reported. Most complications can be avoided with a perfect technique and a proper selection of patients. Absolute contraindications to the procedure include hemodynamic or respiratory instability, serious heart and lung diseases, and diaphragmatic defects. It is sometimes necessary to exclude from examination patients with extensive operative scars.