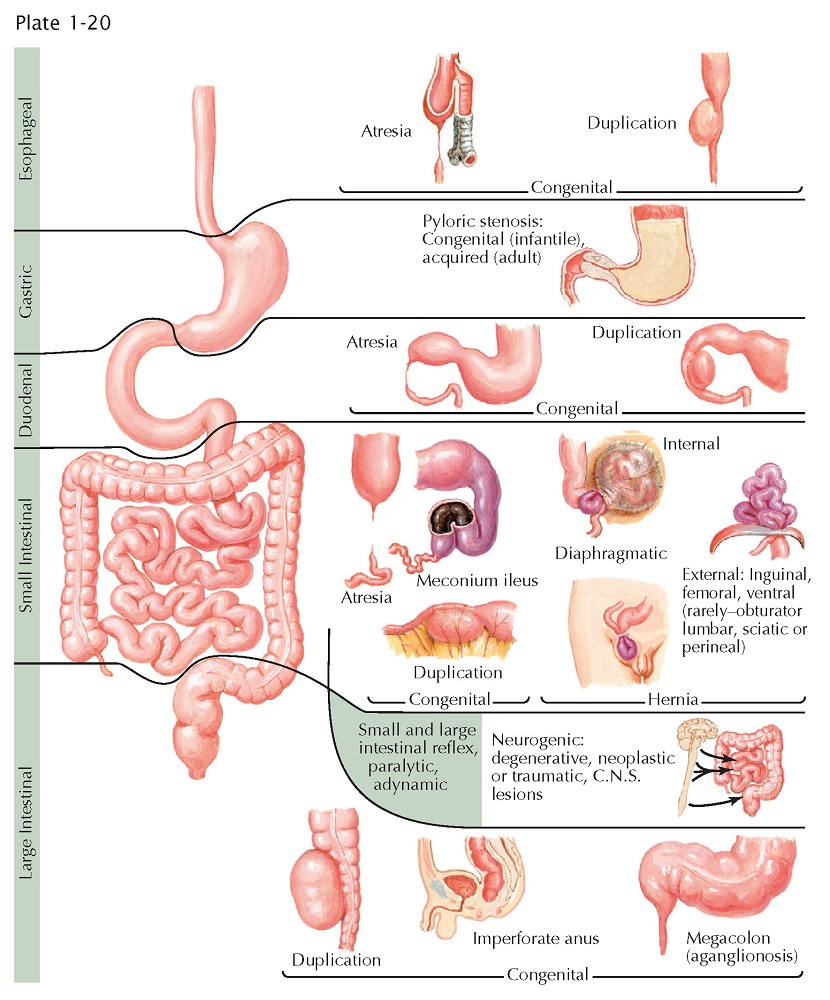 Any organic or functional condition that primarily or indirectly impedes the normal propulsion of luminal contents from the esophagus to the anus could be considered a partial or complete obstruction. In the newborn, a variety of congenital anomalies (esophageal, intestinal, anal atresias, colonic malrotation, volvulus of the midgut, meconium ileus, aganglionic megacolon) resulting in obstruction are illustrated here. Other causes of mechanical interference of intestinal function in early infancy include incarceration in an internal or external (inguinal) hernia, congenital peritoneal bands, intestinal duplications, volvulus due to mesenteric cysts, and annular pancreas, though the latter may not become clinically manifested until the patient is an adult or an aged adult.

Esophageal diseases that interfere with the normal passage of fluids and solids are illustrated in the upper-most row of the drawing. Esophageal strictures can be iatrogenic from endoscopic procedures, irradiation, medications, or surgery; vascular; neoplastic; or, most commonly, gastroesophageal reflux. Congenital or acquired webs and rings, particularly Schatzki rings, are common, easily treatable causes of esophageal obstruction. Fundoplications performed to treat reflux and repair an esophageal hernia will, by design, reduce the size of the lumen at the gastroesophageal junction and hence produce a functional stricture. Creating a surgical narrowing that is snug but not excessively tight (so that it causes a functional or mechanical obstruction) is the essence of a successful surgical intervention. Extraluminal pressure on the esophagus by a tumor mass, goiter, aberrant or enlarged arteries, or visceral abnormalities in the neck or mediastinum will lead to the same results.

Functional or mechanical impairment of gastric emptying is common. Gastroparesis implies a functional delay, but this diagnosis should only be made when intrinsic and extrinsic causes of mechanical obstruction, metabolic causes, and medication-related causes have been excluded. Gastroparesis is commonly seen in patients with hypothyroidism, amyloidosis, or connective tissue disease; following surgery; and as a complication of diabetes. Gastroparesis can be difficult to distinguish clinically from partial gastric obstruction because both present with early satiety, nausea, vomiting, bloating, distention, and, if prolonged, weight loss. Habitual intake of excessive indigestible material that accumulates in the stomach—such as hair (trichobezoar), fruit or vegetable fibers (phytobezoar), undissolved medications (pharmacobezoar), and even plastic materials—can result in chronic partial gastric obstruction. Initially these materials may persist as accumulations of loose semisolids, but with time, they will be compressed by gastric contractions into a solid ball that can add to the impaired emptying. Intrinsic benign mechanical occlusion occurs most commonly from antral, prepyloric, or pyloric peptic ulcer. Surgery, irradiation, ingestion of caustic substances, and benign neoplasms such as large epithelial polyps, leiomyomas, or gastrointestinal stromal tumors commonly also lead to partial gastric obstructions. Intrinsic or extrinsic malignant neoplasms are all too common mechanical causes of gastric outlet obstruction.

Obstruction of the duodenum is most commonly due to peptic ulcer disease. As with other severe complications of peptic ulcer, peptic strictures should raise concern for the presence of a gastrinoma (Zollinger-Ellison syndrome). Extraluminal compression may occur, as in superior mesenteric artery syndrome, in which local extension of a carcinoma of the head of the pancreas, colon, or upper pole of the left kidney puts pressure on or invades other structures. Other extrinsic neoplastic causes of duodenal obstruction include lymphadenopathy in the small bowel mesentery or extension of cancer into the transverse mesocolon.

Small intestinal obstruction typically leads to periumbilical pain, bloating, and, eventually, vomiting of feculent liquids. Of the wide variety of conditions that can lead to obstruction of the small intestine, the most common in adults are adhesions following previous surgery. In children and adults, the presence of an incarcerated loop of small bowel in a hernia should be considered as a potential cause that will require urgent surgical attention before ischemic injury ensues. Hernias are described, based on their location, as inguinal, femoral, diaphragmatic, paraesophageal, incisional, umbilical, ventral, or internal, including spigelian hernia. Incarceration of a hernia resulting from entrapment of a loop of small intestine in a congenital, traumatic, or surgical ring is a surgical emergency. The small intestine can also be obstructed by large intra-luminal objects, including ingested foreign bodies, bezoars, or a large biliary calculus, or as a consequence of an accumulation of parasitic worms. Mechanical obstruction of the small intestine may also be produced by intussusception, which will be found to be secondary to a mucosal lesion in a frequency that increases with the patient’s age. Varying degrees of small bowel obstruction may be the result of segmental fibrotic stricture formation in patients with Crohn disease, most commonly in the ileum and jejunum. Small bowel loops may become stenotic as the result of healing following localized infarction sustained in hernial incarceration or mesenteric vascular occlusion. Primary neoplasms of the small intestine, while rare, should always be considered in the differential diagnosis and include carcinomas, neuroendocrine tumors, gastrointestinal stromal tumors, leiomyosarcomas, and lymphomas. Finally, iatrogenic intestinal obstruction may occur on occasion, including anastomotic stenosis, torsion or angulation, or antiperistaltic anastomosis of intestinal loops, or as the result of other faulty surgical techniques. Common extrinsic causes of intestinal obstruction other than postoperative adhesions include congenital peritoneal bands, metastatic tumor implants, Meckel diverticulum, and adhesive peritonitis (tuberculosis, Mycobacterium avium intracellulare, or other foreign body granulomas).

Nonmechanical impairment of intestinal motor function has been descriptively termed reflex, adynamic, or paralytic ileus. The continued use of this term is unfortunate. Although it is used widely to describe functional intestinal motility, it almost never is restricted to the ileum alone and, in fact, is often used indiscriminately when both the small bowel and large bowel are dysfunctional. The term ileus should not be used to describe impaired motility isolated to the colon. The patient typically presents with failure to pass flatus, abdominal distention, a “silent abdomen,” and the radiographic findings of dilatation of the small and/or large intestine with accumulation of fecal material, fluids, and excess gas. 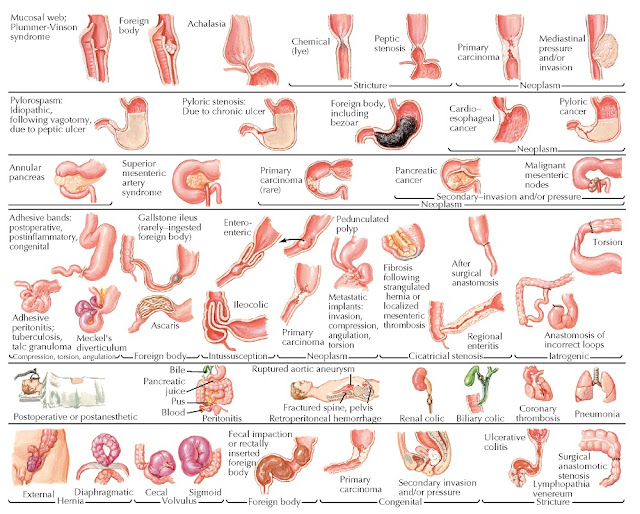 Ileus can be a complication of various conditions that can lead to delayed intestinal transit, including metabolic disorders, metastatic neoplasms, vascular or inflammatory disorders, and infectious mesenteritis. Other causes include central nervous system lesions, spinal disorders, postoperative complications, or complications following pancreatitis, peritonitis, penetrating or blunt trauma, or extensive rib fractures. Other clinical conditions in which ileus has been said to occur as a “reflex” phenomenon include renal or biliary colic, pneumonia, torsion infarction of an ovarian cyst, coronary thrombosis, and retro-peritoneal hemorrhage (incident to fracture of the spine or pelvis, a dissecting aortic aneurysm, urinary extravasation, or rupture of the kidney). Causes of constipation are described elsewhere.

So-called paralytic or adynamic ileus occurs commonly in the setting of purulent peritonitis (due to a perforated appendix, perforated hollow viscus, pelvic inflammatory disease, leakage or dehiscence of an intestinal suture line, wound evisceration, and other problems). Ileus may follow the intraperitoneal extravasation of gastric or duodenal contents (perforated peptic ulcer), pancreatic juice (acute hemorrhagic pancreatitis), bile (perforated gallbladder, bile leakage from the liver or bile ducts), and blood (postoperative hemorrhage, rupture of the liver or spleen, ectopic gestation, or “chocolate” cyst of the ovary).