OXYGEN THERAPY IN CHRONIC RESPIRATORY FAILURE (AMBULATORY AND HOME USE

OXYGEN THERAPY IN CHRONIC RESPIRATORY FAILURE (AMBULATORY AND HOME USE 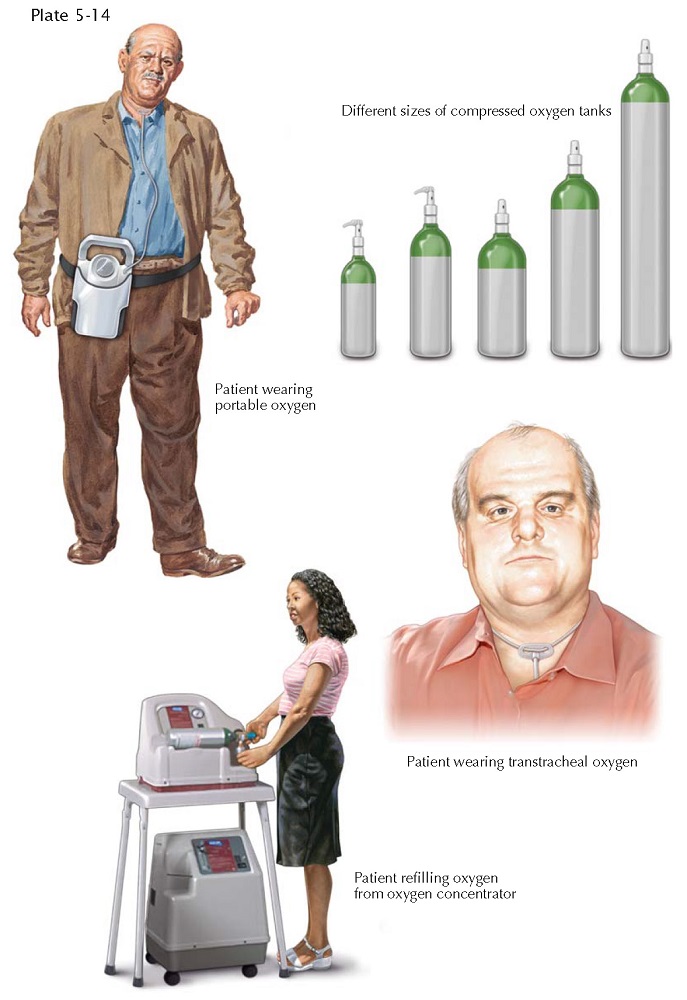 Supplemental oxygen was the ﬁrst treatment shown to improve survival in patients with chronic obstructive pulmonary disease (COPD). A multicenter clinical trial published in 1980 demonstrated the beneﬁt of oxygen used continuously compared with oxygen only administered nocturnally. The current recommendations for oxygen therapy in patients with COPD are (1) partial pressure of oxygen in arterial blood (Pao2) of 55 mm Hg or below (or pulse oxygen saturation [Spo2]  ≤88%) or (2) Pao2 of 56 to 60 mm Hg (Spo2, 89%) with erythrocytosis (hematocrit >56 mL/dL) or cor pulmonale. Because of the beneﬁts of oxygen, reimbursement is available from most medical insurance payers. The long-term beneﬁt of oxygen in patients with less severe hypoxemia is unknown.

Three types of oxygen systems are available: (1) gaseous oxygen stored under high pressure in lighter weight aluminum or steel cylinders, (2) oxygen stored in liquid form, and (3) concentrators that are electrically powered and concentrate the oxygen in ambient air. To use oxygen 24 hours a day, patients need systems that will provide oxygen in the home and where they work during the day, at night, and during ambulation when out of the house during the day. Oxygen systems can reliably and conveniently provide oxygen in all of these circumstances. Smaller, lightweight oxygen systems are more appropriate for use during ambulation, and it has been recommended that systems designed for use during ambulation should weigh 5 lb or less. Each patient should be evaluated individually and provided with an oxygen system that best ﬁlls his or her needs. When prescribing oxygen, health care providers should order the ﬂow rate of oxygen needed to ensure an Spo2 of about 90%-92% at rest, during ambulation, and nocturnally. Home care oxygen suppliers, health care providers, and patients should carefully consider which oxygen system is best for each individual. The optimal oxygen system for each patient is the one that best fulﬁlls that person’s medical needs and allows him or her to pursue an independent and functional lifestyle with careful consideration of the oxygen ﬂow rate and amount of time spent in various activities inside and outside the home.

Oxygen concentrators were originally designed for use in the home and are still widely used in that setting because of their reliability, durability, and low maintenance requirements. Newer units are smaller and quieter and can provide higher ﬂow rates than previous models. Battery-powered concentrators can be used for mobility and are allowed for use on many commercial airliners.

Gaseous oxygen cylinders are available in a wide variety of sizes. Small cylinders are convenient and light enough for patients to carry over their shoulder. Larger cylinders contain more oxygen and provide a longer duration of use, but they are heavier and thus more difﬁcult for patients to carry. Traditionally, gaseous cylinders had to be delivered to patients by a home care oxygen company. However, some oxygen systems now provide oxygen via concentrator while also ﬁlling a gaseous oxygen tank.

Liquid oxygen can be provided in a large tank for use during the day. Smaller liquid tanks weighing 5 lb or less can be ﬁlled by patients from the larger reservoir. One disadvantage of liquid oxygen is the need for delivery on a regular basis.

To reduce the amount of oxygen used by patients, oxygen conservers are commonly used in the home. These devices take advantage of the fact that oxygen is only needed during inspiration and is wasted during expiration. Moreover, only oxygen delivered during the early portion of inspiration reaches gas-exchanging alveoli.

Oxygen is most often delivered to the nares by an oxygen cannula. To be less obtrusive, the cannula can be embedded into eyeglass frames. Oxygen can also be delivered transtracheally (i.e., through a catheter placed through the neck into the trachea). Advantages of transtracheal oxygen include a reduction in the ﬂow rates needed compared with a nasal cannula, elimination of nasal adverse effects, and the ability to conceal the catheter.