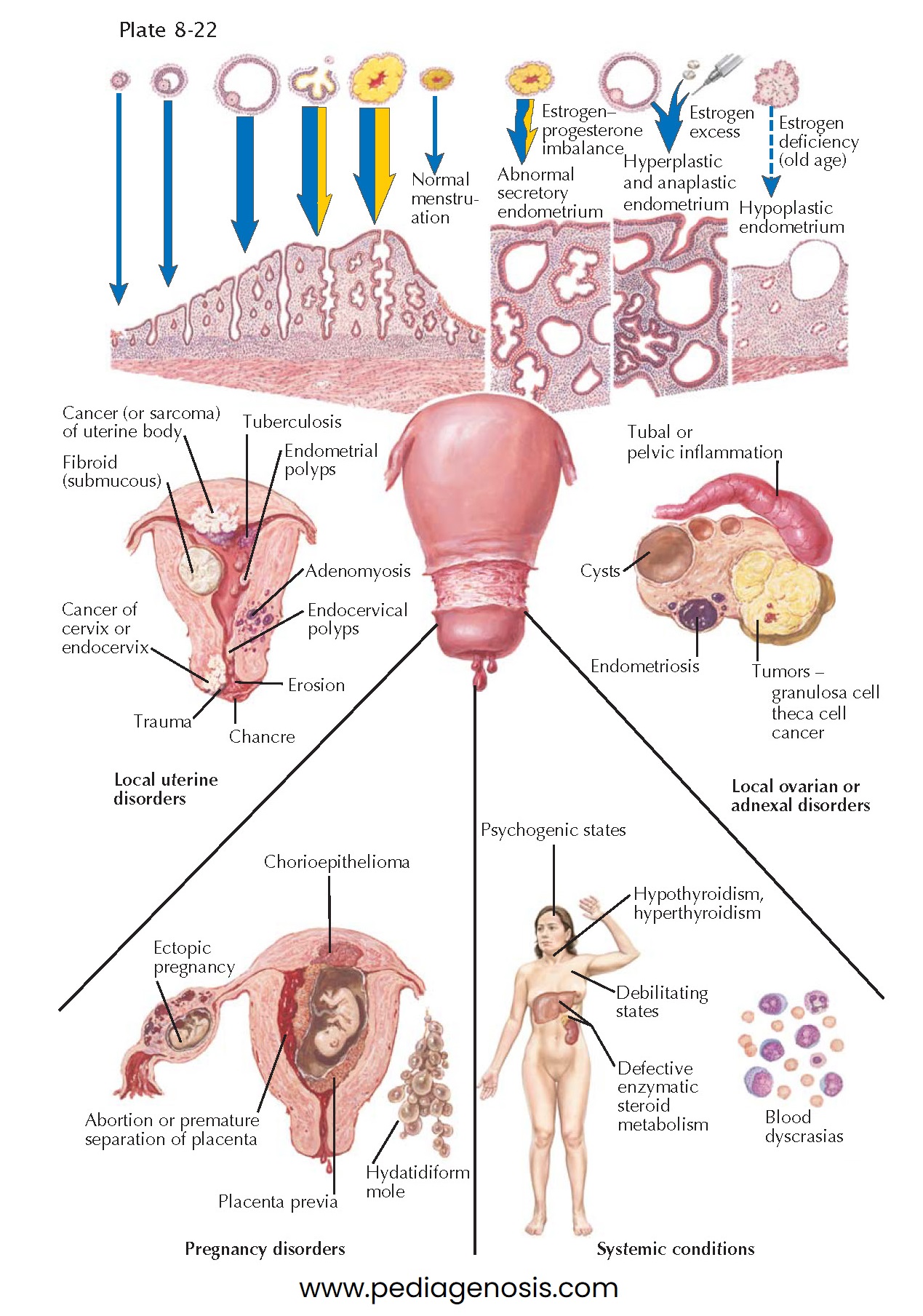 The endometrium is the only tissue in the body in which the regular, periodic occurrence of necrosis and desquamation with bleeding is usually a sign of health rather than of disease. This periodic blood loss is controlled through a delicate balance of pituitary and ovarian hormones and results from the speciﬁc response of the target tissue, the endometrium. The normal ebb and ﬂow of estrogen and progesterone, through a monthly cycle, ﬁrst builds up and then takes away, in regular sequence, the support of the endometrium; therefore, a menstrual ﬂow, characterized by repeated regularity in timing, amount, and duration of bleeding, bears witness to a normal and ordered chain of endocrine events for that individual. Irregularity in any of these characteristics suggests a functional disturbance or organic pathology. The major categories of pathologic states that can cause or be accompanied by either menorrhagia (heavy or prolonged ﬂow) or metrorrhagia (spotting or bleeding between menstrual ﬂows) are discussed below.

In the normal cycle, a progressive increase in estrogen production, with a sharp rise from the maturing follicle toward the 14th day, causes a parallel development of all elements in the endometrium—stroma, glands, and coiled superﬁcial arteries. At or soon after ovulation, the production of progesterone from the corpus luteum slows growth and proliferation and modiﬁes the tissue into a secretory pattern. If conception and pregnancy do not occur, then the corpus luteum regresses in 14 days; its production of both estrogen and progesterone wanes; there are shrinkage of the endometrium, congestion of the nutrient arteries, autolysis, necrosis, and desquamation.

Persistent estrogen without progesterone production, resulting from a continued failure to ovulate, tends to build up a hyperplastic endometrium in which nests of anaplastic glands may develop. The circulating level of estrogen ﬂuctuates in accordance with haphazard spurts of follicle growth. Sporadic reduction in circulating estrogen, spontaneously or through medication, undermines the support of the endometrium and initiates the changes inevitably followed by necrosis and bleeding. In old age, the hypoplastic, estrogen-deﬁcient endometrium sometimes breaks down and bleeds from a vulnerability to mild trauma or infection.

Local uterine disorders causing abnormal bleeding include malignancy of the corpus or cervix, benign submucous ﬁbroids and polyps, adenomyosis, and infections such as endometritis or tuberculosis. Childbirth lacerations or erosions are, only rarely, the sole cause for undue bleeding.

Local ovarian or adnexal disorders may involve primary malignancies, including those cystic or solid ovarian tumors that secrete steroid compounds. Pelvic inﬂammatory disease and endometriosis may also cause irregular bleeding.

Pregnancy disorders, due not only to placental dislocations or to deﬁciencies as illustrated under systemic conditions, but also to miscarriage, ectopic gestation, or degenerative conditions such as hydatidiform mole or chorioepithelioma, constitute the most frequent causes of pregnancy-related uterine hemorrhage.

A variety of systemic conditions may be responsible for abnormal bleeding. Conditions such as blood dyscrasias, leukemia, and purpura, usually show signs of bleeding elsewhere. Chronic and debilitating disease states, including iron-deﬁciency anemia and either hypo-or hyperthyroidism, can produce abnormal ﬂow as well as undermine placental function. Defects in steroid metabolism or excretion by the liver or kidneys may produce a buildup in circulating estrogen, with consequent endometrial effects.