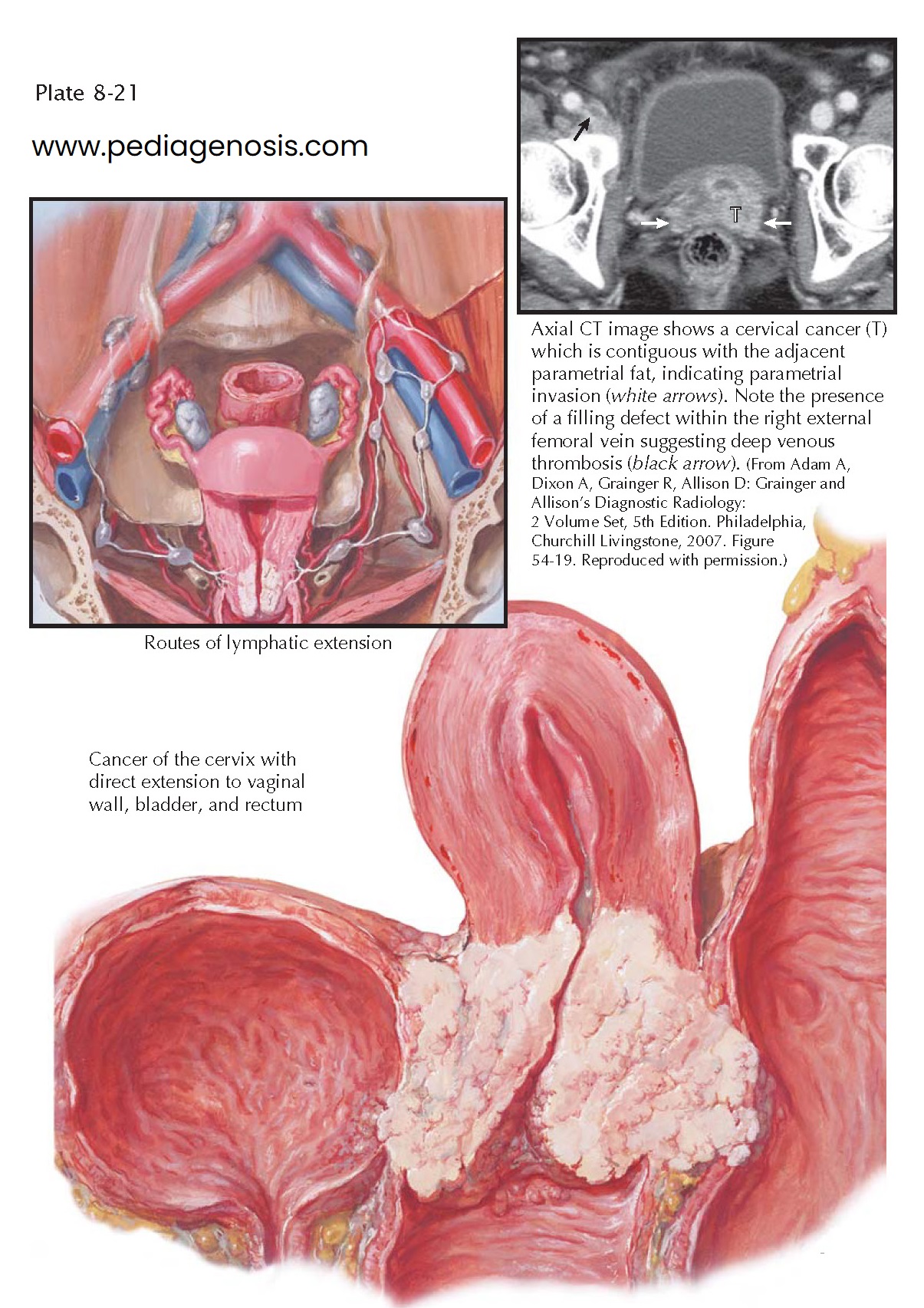 Carcinoma of the cervix is initially a locally inﬁltrating cancer that spreads from the cervix to the vagina and paracervical and parametrial areas following a well-deﬁned pattern of extension: Spread of the disease occurs primarily either through local lymphatic channels or by direct invasion of adjacent organs.

First involved are the lymphatics in the broad ligaments followed by nodes deep in the pelvis. Rarely the inguinal nodes are involved; however, if the lower one-third of the vagina is involved, then the median inguinal nodes should be considered a primary node. From the original site, the malignancy may invade and spread directly through the whole thickness of the cervix, the upper vagina, the posterior wall of the bladder, or the anterior wall of the rectum. Death results more frequently from the uremic complications of extensive disease resulting in ureteral obstruction, either locally or in the node-bearing areas described above, than from late metastases to the liver, lungs and bones.

Cervical cancer is characterized in two ways: histologically, according to the degree of differentiation from Grade I to Grade IV denoting increasingly more malignant and more rapidly growing cell types and, clinically, according to stages that indicate the demonstrable preoperative extension of the growth. From the prognostic point of view, the histologic grading bears little statistical relationship to 5-year survival rates after adequate therapy. Prompt institution of treatment early in the disease is the key to a good prognosis, and for this reason the clinical staging at time of ﬁrst examination has a direct bearing on chances of survival. The staging of cervical cancer is as follows: stage I is tumor conﬁned to the cervix; stage IA is microinvasion (pre-clinical), and stage IB is all other cases conﬁned to the cervix; in stage IIA the tumor spreads to the upper two-thirds of the vagina, and stage IIB is where the tumor spreads to paracervical tissue but not to the pelvic walls; stage IIIA denotes tumor spread to the lower third of the vagina, and in stage IIIB the tumor has spread to the pelvic wall or obstruction of either ureter by tumor; in stage IV, tumor spread is to the mucosa of the bladder or rectum or outside the pelvis.

Evaluation of these patients should include a chest radiograph, intravenous pyelogram, and computed tomographic or magnetic resonance imaging (MRI) scans to assess extent of disease and to assist in staging. (As experience grows, MRI is displacing other imaging modalities because of its ability to assess lymph nodes [72% to 93% accuracy] and possible tumor spread.) Colposcopy and cervical biopsy (conization preferred) and biopsy of vaginal or paracervical tissues may be required to assess extent of disease. Staging is currently clinical and relies primarily on clinical examination and the status of the ureters. For two major reasons, however, the most accurate preoperative clinical staging can never give more than an approximate prognosis in any individual case. First, it is clearly impossible to gauge accurately from the physical examination and other tests whether or not an apparently early, locally demarcated growth may not already have spread to lymphatic channels and nodes. Second, these neoplasms show a marked individual variability in their response to radiation.

Therapy is based on stage of disease. Radical surgery is usually used for selected patients with stages I and II disease. Radiation therapy (brachytherapy, teletherapy) is used for stages IB and IIA disease or greater. Postoperative radiation therapy reduces the risk of recurrence by almost 50%. In situ carcinoma may be eradicated satisfactorily by surgery if an adequate margin of healthy tissue is excised.