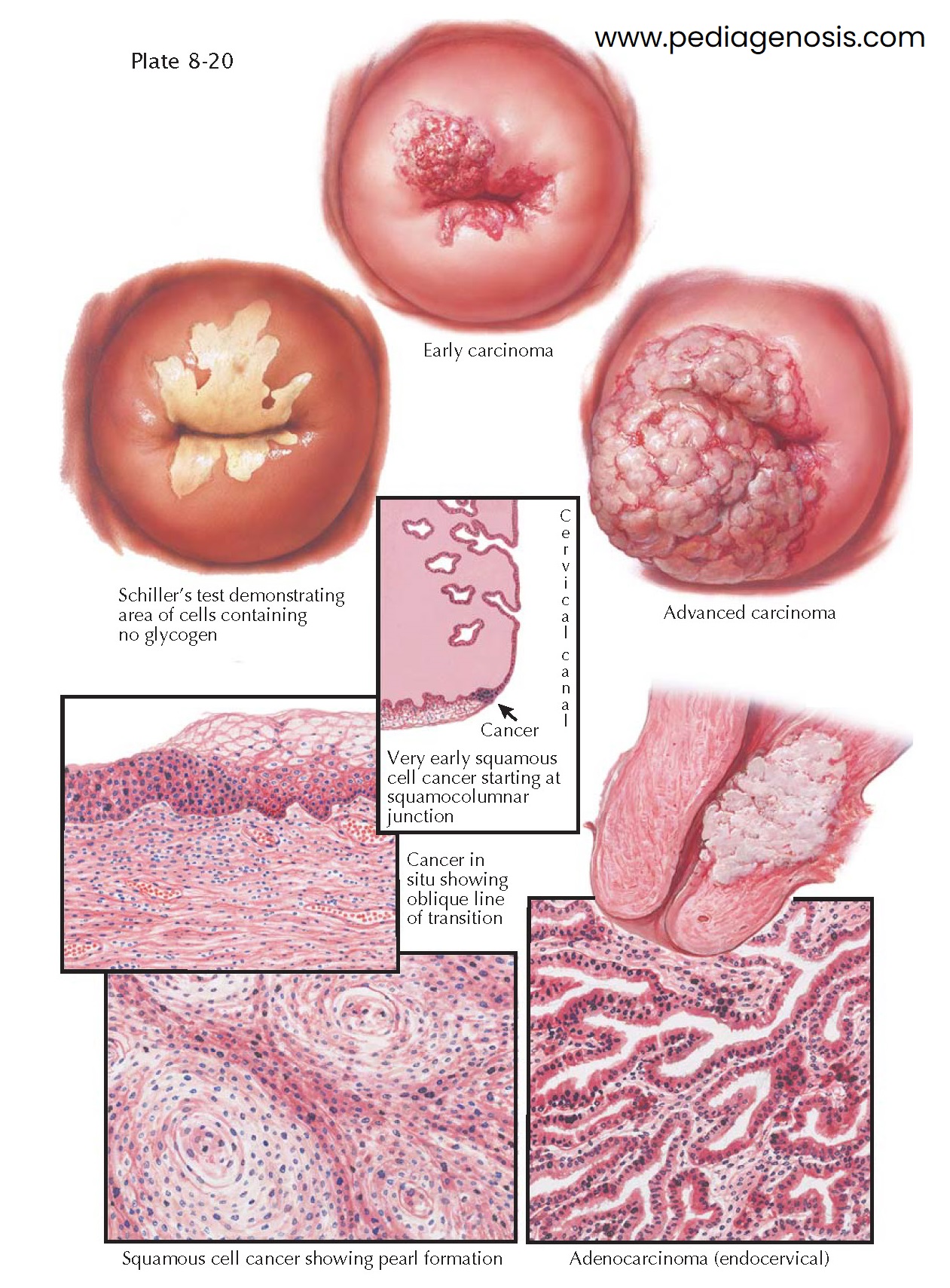 Almost all cancers of the cervix are carcinomas—85% to 90% are squamous carcinoma, and 10% to 15% adenocarcinoma. The average age of patients with cervical carcinoma is 40 to 60 years, with a median of 52 years. Squamous cervical cancer is strongly linked to some serotypes of human papillomavirus (HPV, 99.7% of all cancers have oncogenic HPV DNA detectable) and, like HPV itself, is associated with early sexual activity and multiple partners. Therapy is based on stage of disease. Radical surgery is used for selected patients with stage I and stage II disease. Radiation therapy (brachytherapy, teletherapy) is used for stage IB and IIA disease or greater. Postoperative radiation therapy reduces the risk of recurrence by almost 50%. Chemotherapy does not produce long-term cures but response rates of up to 50% have been obtained with multiagent combinations (cisplatin, doxorubicin, and etoposide; other combinations have also been successful).

In situ cancer shows histologically a complete lack of stratiﬁcation through the whole epithelial thickness. It is a morphologic alteration of the cervical epithelium in which the full thickness of the epithelium is replaced with dysplastic cells (CIN III). While the entire thick- ness of the epithelium is replaced with abnormal (dysplastic) cells, there is no invasion of the underlying stroma. This change is generally associated either spatially or temporally with invasive carcinoma. Though the basal layer is found intact, considerable leukocytic inﬁltration will be observed in the subjacent stroma, and a sharp, oblique dividing line between normal and abnormal cellular architecture has often been noted. These pathologic ﬁndings do not inevitably progress to invasive malignancy because untreated disease progresses to invasive carcinoma over the course of 12 to 86 months in only 15% to 40% of patients. Management of early disease is by cervical conization and endocervical curettage to conﬁrm the absence of invasion or a more extensive lesion. In those wishing to preserve fertility, this may be curative; in others, standard hysterectomy may be considered. Ablative therapy can only be considered when the entire lesion is visible and invasion has been ruled out.

Early invasive carcinoma can also be indistinguishable at pelvic examination from benign granulations associated with lacerations or erosions of the cervix. Squamous carcinoma grows in the cervix, as elsewhere, in sheets of cells that may include the formation of epithelial pearls characteristic of the lesion. When advanced malignancy takes the form of a cauliﬂower growth, often covered with a dirty slough that breaks away with quick hemorrhage at the trauma of examination, the diagnosis of cancer is almost assured. It is in these advanced lesions, however, that cytologic tests may reveal only blood cells and necrotic epithelial elements. Some growths may reach a late stage of stromal invasion by submucous extension and yet be associated with only a minimal amount of surface involvement.

This is especially true of lesions arising within the endocervical canal. Whenever clinical doubt exists, biopsy is the only deﬁnitive way of establishing the diagnosis.

The risk of nodal involvement in squamous cervical carcinoma is based on stage of disease, with only 15% pelvic node involvement in stage I disease, rising to 47% in stage III. Survival is similarly based on stage with 99% 5-year survival for stage IA and declining to only 2% for stage IVB. One-third of patients develop recurrences, half within 3 years after primary therapy, with the best prognosis for later recurrences. Short-term serious complications will occur in 1% to 5% of surgical cases.

Adenocarcinoma of the cervix arises from the endo- cervical glands and exhibits under the microscope the typical pattern of a well-differentiated malignancy of epithelial glands.