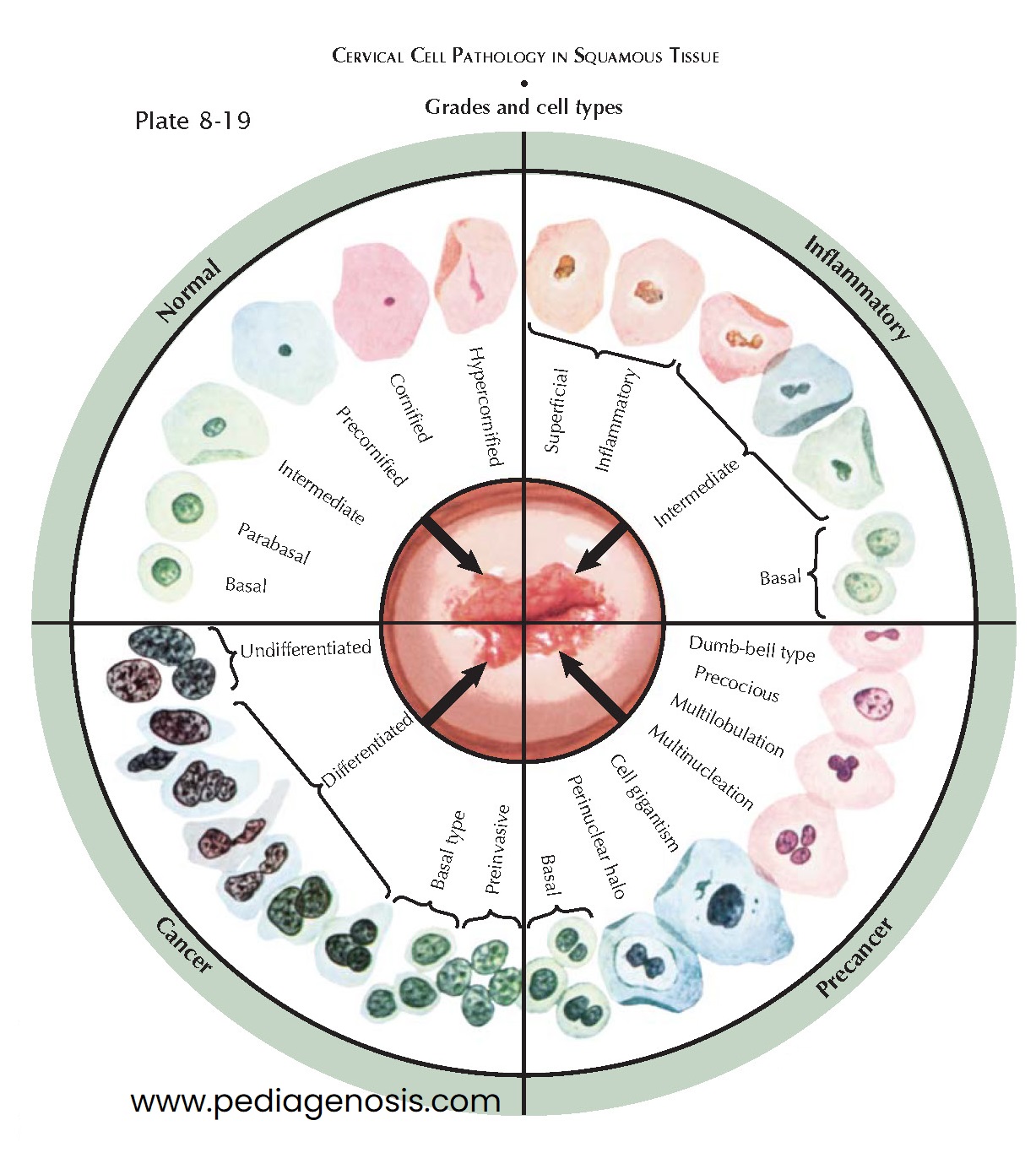 In its early stages, cancer of the cervix is a curable disease. Essentially a slow-growing neoplasm, it is con-ﬁned to the surface epithelium as a noninvasive growth for a period of several years. These in situ lesions are impossible to diagnose by gross examination. The Papanicolaou (Pap) smear dramatically changed both the diagnosis and treatment of cervical cancer. Enhanced understanding of the role of human papillomavirus (HPV) in cervical cancer is adding tools to the assessment of a woman’s risk of cervical cancer, but cervical cytology remains the mainstay of screening.

By a scraping technique, one obtains tissue from the external os, where the stratiﬁed squamous epithelium passes over into the columnar epithelium of the cervix. Because the squamocolumnar junction is, in the majority of cases, the original site of cervical cancer, an early diagnosis and a differentiation from inﬂammatory processes are possible. Only the most essential characteristics of normal and pathologic cells can be mentioned here.

For diagnostic purposes, the cells of the squamous epithelium have been classiﬁed according to the zones from which they derive—deep, middle, and superﬁcial. The basal and the slightly larger parabasal cells of the deep layer are rather uniform in size, with fairly sharp nuclei. The intermediate and precorniﬁed cells of the middle layer are larger than the deeper cells, with smaller nuclei, which stain less. The corniﬁed cells of the superﬁcial layer possess the characteristic staining qualities of corniﬁcation. The nuclei are small, often scarcely recognizable. These epithelial cells show some variable changes during inﬂammatory processes and are admittedly, in many instances, difﬁcult to recognize as characteristic of inﬂammation. They cannot always be correlated with the clinical picture, and they return spontaneously to the cytologic characteristics of normal cells. Essentially, as seen in the diagrammatic drawing, the nuclei of the inﬂammatory cell type are larger and more irregular; the cytoplasm is more acidophilic, creating the impression of precorniﬁcation and corniﬁcation, although evidence is available that this is not a true corniﬁcation (“pseudocorniﬁcation”). The number of exfoliating cells is increased, as is also indicated by the schematic presentation. This results in the presence of more basal or immature cells.

The very earliest abnormalities associated with precancerous changes are nonspeciﬁc. The Bethesda “ASC” diagnosis has been developed to describe squamous cell changes that are more severe than reactive changes, but not as marked as those found in squamous intraepithelial lesions (squamous intraepithelial lesions [SIL], high and low grade). The ACS designation has been subdivided into “atypical squamous cells— undetermined signiﬁcance” (ASC-US) and “atypical squamous cells—cannot exclude HSIL” (ASC-H). The latter include those cytologic changes suggestive of high-grade squamous intraepithelial lesions (HSILs) but are insufﬁcient for a deﬁnitive diagnosis. The category of “atypical glandular cells,” by contrast, includes a range of ﬁndings from benign reactive changes in endocervical or endometrial cells to adenocarcinoma. The chief characteristics of the cells of all layers are the multilobulated, hyperchromatic nuclei and the greater number of corniﬁed cells with distinct nucleus or nuclei as well as the appearance of giant cells.

The cellular changes in cancer of the cervix, whether it is clinically an early or a progressed growth, are in general the same as in carcinoma of all other organs. The lack of differentiation, the departure from the normal cell type to a more primitive (embryologic) type (anaplasia), the failure to cornify, the hyperchromatism, and the irregularity of the nucleus and its enlargement with relation to the size of the cell are demonstrated in the schematic drawing. The lack of corniﬁed cells is also characteristic, but this does not mean that from the scrapings of normal tissue parts one might not obtain corniﬁed elements.