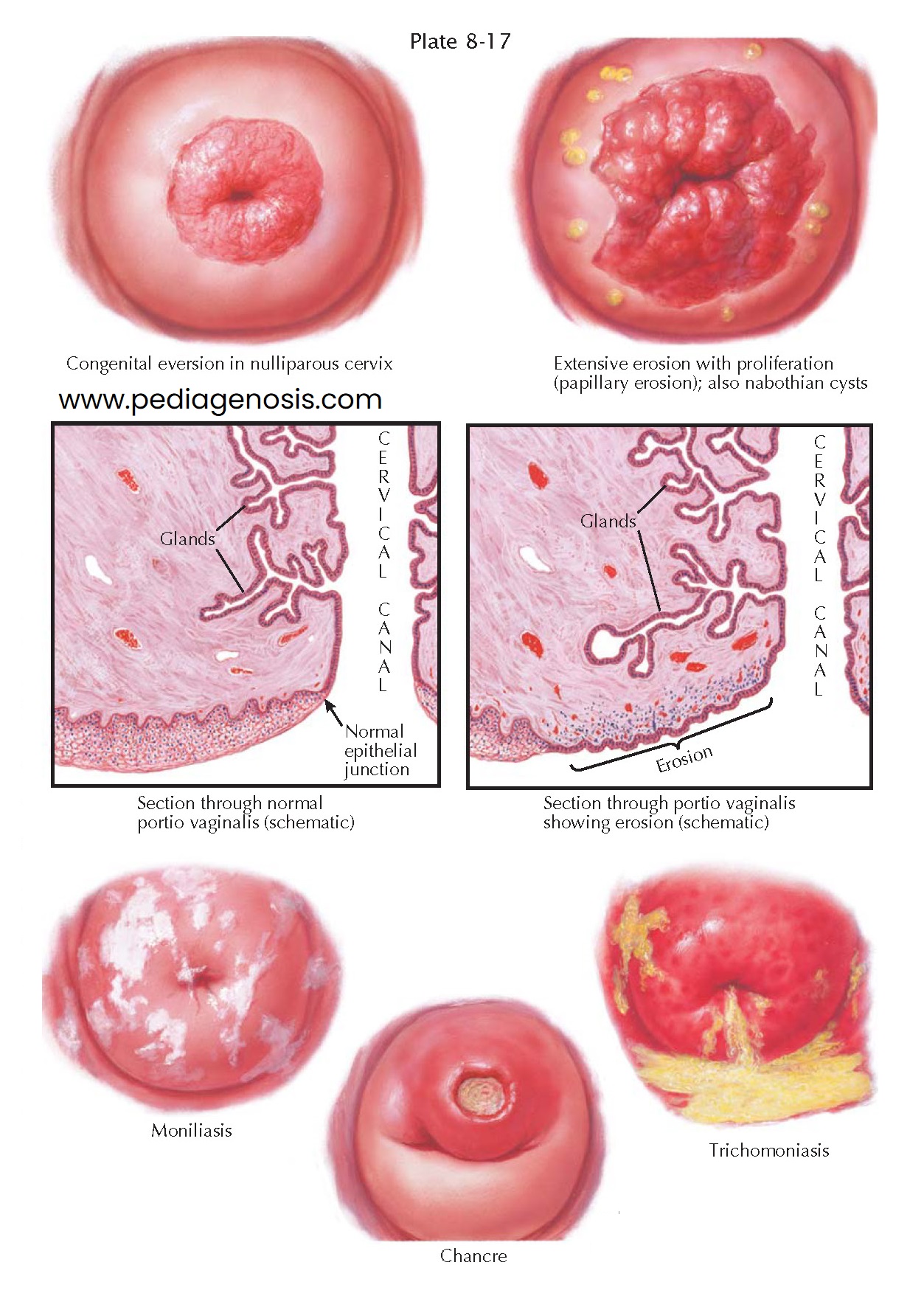 Gonorrhea and chlamydial infections of the cervix are common and can ascend into the upper genital tract with potentially serious sequelae, including chronic pelvic pain, infertility, ectopic pregnancy, and an increased risk of hysterectomy. Any exposure of the mucous glands in the endocervical canal predisposes the cervix to chronic low-grade infection. The most common causes of such exposure are eversions due to congenital defects or childbirth injuries. Congenital eversions are occasionally found in nullipara and present a concentric area of red, granular tissue about the external os. Exposure to increased levels of estrogen is thought to be a predisposing risk factor for such eversions.

The coarse, red appearance of this ectopic tissue is not primarily caused by infection but is due to the presence of a ﬁne capillary network, which lies directly under and shines through the single layer of columnar cells. Indeed, one may ﬁnd clinically very little infection, with neither ulceration nor true erosion at all, although evidences of irritation in the underlying stroma are generally histologically recognizable. In young girls, this anomaly often causes a noticeable, thin, watery mucous discharge that may have been noted ﬁrst even before the menarche. Thereafter, cyclic variations in the estrogen level cause increased activity of the endocervical glands and create a typical ﬂuctuating pattern to the complaint of a nonodorous, colorless discharge. Such a characteristic story may alone be enough to suggest the diagnosis of the congenitally ectopic cervix in young women. Ulcerations or true erosions in such areas may result secondarily because of their vulnerability to saprophytic organisms.

The even, concentric appearance of the congenital lesions just described contrasts sharply with the jagged papillary eversions. These usually result from lacerations during childbirth. The gland-bearing surface of the endocervical canal pouts outward, and infection then may produce true erosions or loss of the overlying epithelial covering.

Spontaneous healing may fail to occur because inward growth of squamous epithelium does not adequately cover such exposed and infected areas. In areas where healing does occur, the epithelium blocks the exit of previously exposed glands, producing retention cysts of various sizes, the so-called Nabothian cysts. Most healing occurs through squamous metaplasia and presents a smooth, characteristic appearance when the cervix is viewed through the colposcope. This metaplasia is stimulated by exposure to the more acidic media of the vagina.

Monilial infections of the vulva and vagina almost invariably involve the cervix as well. Patches of white, cheesy discharge are found over the vaginal epithelium and cervix. The mucosa is ﬁery red and markedly inﬂamed. Generally, the infection causes an acute vulvovaginitis with intense itching. Diagnosis is usually possible from the characteristic appearance of the discharge, which is tenacious and difﬁcult to wipe off.

The cervix is also involved in the Trichomonas infection of vulva and vagina. Similar to the epithelial changes in the vagina, the external oriﬁce—as a matter of fact, the entire portio vaginalis of the cervix—assumes a spotted, “strawberry-like” or punctate appearance because of a typical arrangement of red spots on a pale background. This is present in about 15% of cases and, when seen, is considered pathognomonic. The slightly yellowish, creamy, sometimes frothy discharge from the oriﬁce, indicating that the process has spread to the endocervical mucosa, is profuse and foul.

Chancre, the primary syphilitic lesion on the cervix, is relatively rare. It is said to account for not more than 1.5% of all primary lesions of the female genitalia.

Chancre of the cervix consists of a sharply delimited ulceration on an indurated base, surrounded by an inﬂammatory reaction with marked edema. A grayish slough in the center of the ulcer may make difﬁcult a diagnosis by dark-ﬁeld examination. The lesion can always be correctly diagnosed by a biopsy from the indurated edge of the crater. Any exophytic lesion on the cervix should be biopsied to determine the diagnosis.