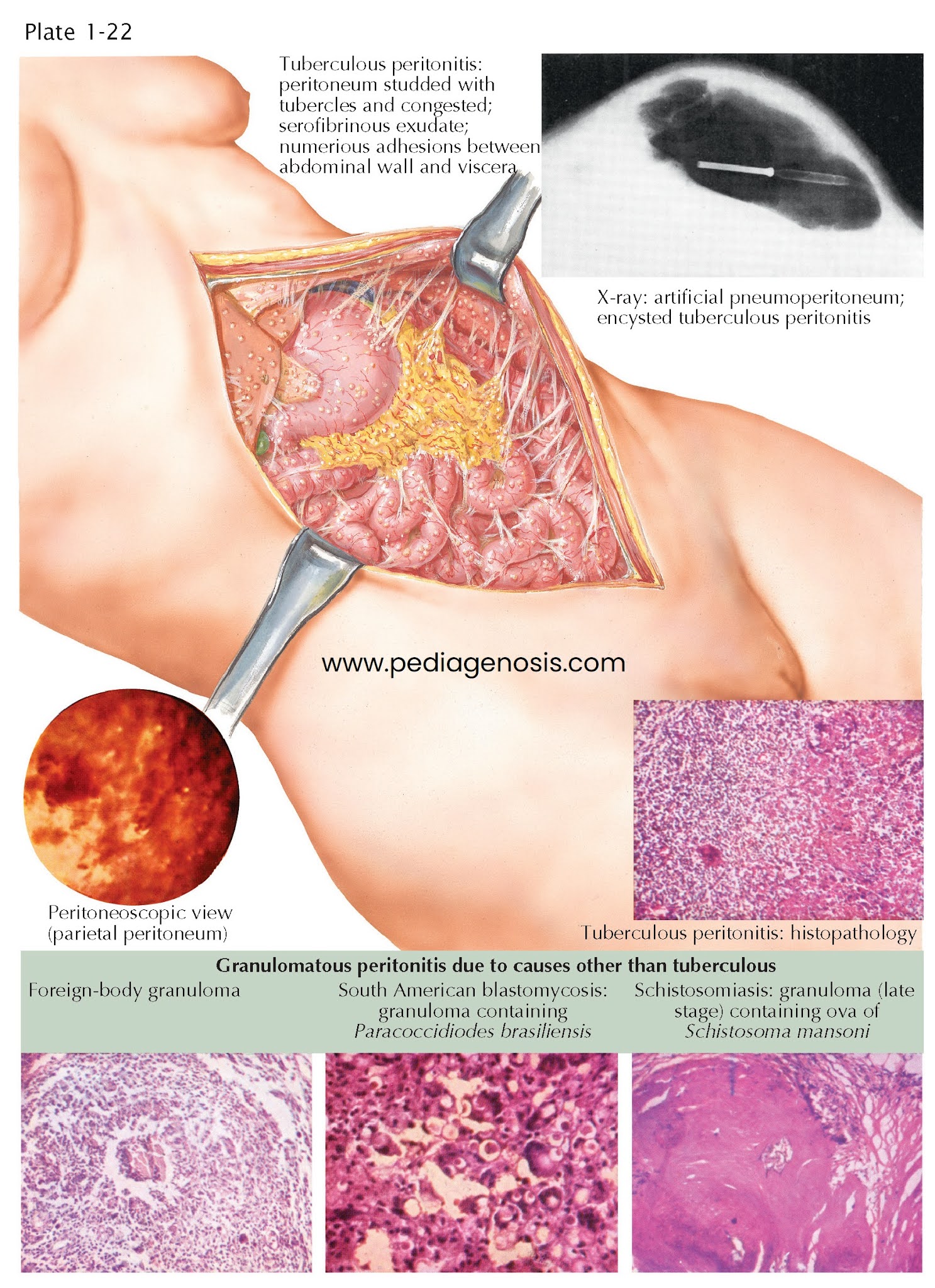 Tuberculous peritonitis can occur at any age but is seen more commonly in young adults and children, patients undergoing dialysis, or immunocompromised patients such as those with acquired immunodeficiency syndrome. It is practically always secondary to some other focus in the body, the most frequent sources of infection being tuberculous lesions in the bowel, mesenteric glands, and fallopian tubes. In the course of general miliary tuberculosis, the tuberculous peritonitis may occur as an acute infection; much more commonly, however, it appears as a chronic condition that manifests itself in one of two main forms: (1) exudative or moist and (2) plastic or dry. In the first variety, the exudation is marked and the abdominal cavity becomes filled with a thin ascitic fluid; numerous tubercles, about the size of a pinhead or larger, appear on the peritoneal surfaces. In the second variety, the exudate is dense and rich in fibrin, formation of adhesions occurs most readily, and the viscera become matted together; the peritoneum is studded with tubercles, which, however, may be covered by deposits of fibrin; the omentum is often greatly thickened and rolled up. Caseous necrosis of tuberculous lesions may lead to formation of fistulous tracts. The two varieties may occur together, giving rise to the so-called encysted or encapsulated form characterized by loculated collections of fluid encysted by the dense adhesions.

Tuberculous peritonitis may have a sudden or an insidious onset. The most common clinical manifestations are diffuse or localized abdominal pain of variable intensity and abdominal distention due to ascites; in the dry form, however, the effusion may be small and difficult to demonstrate by physical examination. Fever is common but is typically intermittent and of low grade. Other symptoms include distention, nausea and vomiting, constipation or diarrhea, and, of course, general constitutional symptoms that usually accompany a tuberculous infection. Physical examination of the abdomen may reveal signs of fluid, a diffuse or localized tenderness, and, eventually, intraabdominal masses. Ascitic fluid obtained by paracentesis may be clear, cloudy, lemon-yellow, or bloody, and, in the case of erosion of the mesenteric lymphatic system, chylous. Its cellular analysis shows, in the very early stages, the predominance of polymorph neutrophils, which are gradually replaced by lymphocytes and monocytes. Tubercle bacilli may eventually be isolated from the ascitic fluid by culture or QuantiFERON. Testing for exposure to tuberculosis can be assessed with skin testing or the interferon gamma release assay. Neither test is very sensitive in the setting of intestinal or peritoneal disease. The most definitive procedure for diagnosis of peritoneal tuberculosis is laparoscopic peritoneoscopic biopsy of a tubercle.

A chronic granulomatous peritonitis grossly resembling that caused by tuberculosis may occur in a number of other diseases. Mycobacterium avium intracellulare infection is a mycobacterial disease that can mimic tuberculosis in every way; it occurs most commonly in immunocompromised patients. South American blastomycosis and coccidioidomycosis (caused by Paracoccidioides brasiliensis and Coccidioides immitis, respectively), actinomycosis, syphilis, and tularemia occasionally involve the peritoneum and produce granulomatous lesions. Foreign substances, such as talcum, liquid petrolatum, x-ray contrast media, and others, introduced into the peritoneal cavity during operations or diagnostic procedures (e.g., hysterosalpingography), as well as extruded gastrointestinal contents left in the abdominal cavity after operations, and contents of ruptured dermoid and other cysts, may all cause a chronic inflammatory reaction, with formation of adhesions and foreign body granulomas. A similar reaction may be produced by Enterobius vermicularis and ova of Schistosoma that may, by erratic migration, reach the peritoneum.

Fibrous bands and adhesions may form in the peritoneal cavity as a late result of acute peritonitis or a result of localized chronic peritonitis (perivisceritis) occurring over the site of an ulcerative or inflammatory lesion in the stomach, intestine, gallbladder, liver, or genital organs. A fibrinous perihepatitis and perisplenitis may accompany liver cirrhosis and other conditions with persistent ascites.

Serositis may mimic bacterial peritonitis. This most commonly is due to systemic lupus erythematosus and related forms of vasculitis. Less commonly, noninfectious peritonitis may be due to familial Mediterranean fever or porphyria. A rare form of polyserositis characterized by intense fibrosis with hyalinization of the peritoneum and other serous membranes, particularly the pericardium and pleura, is known as Pick or Concato disease.