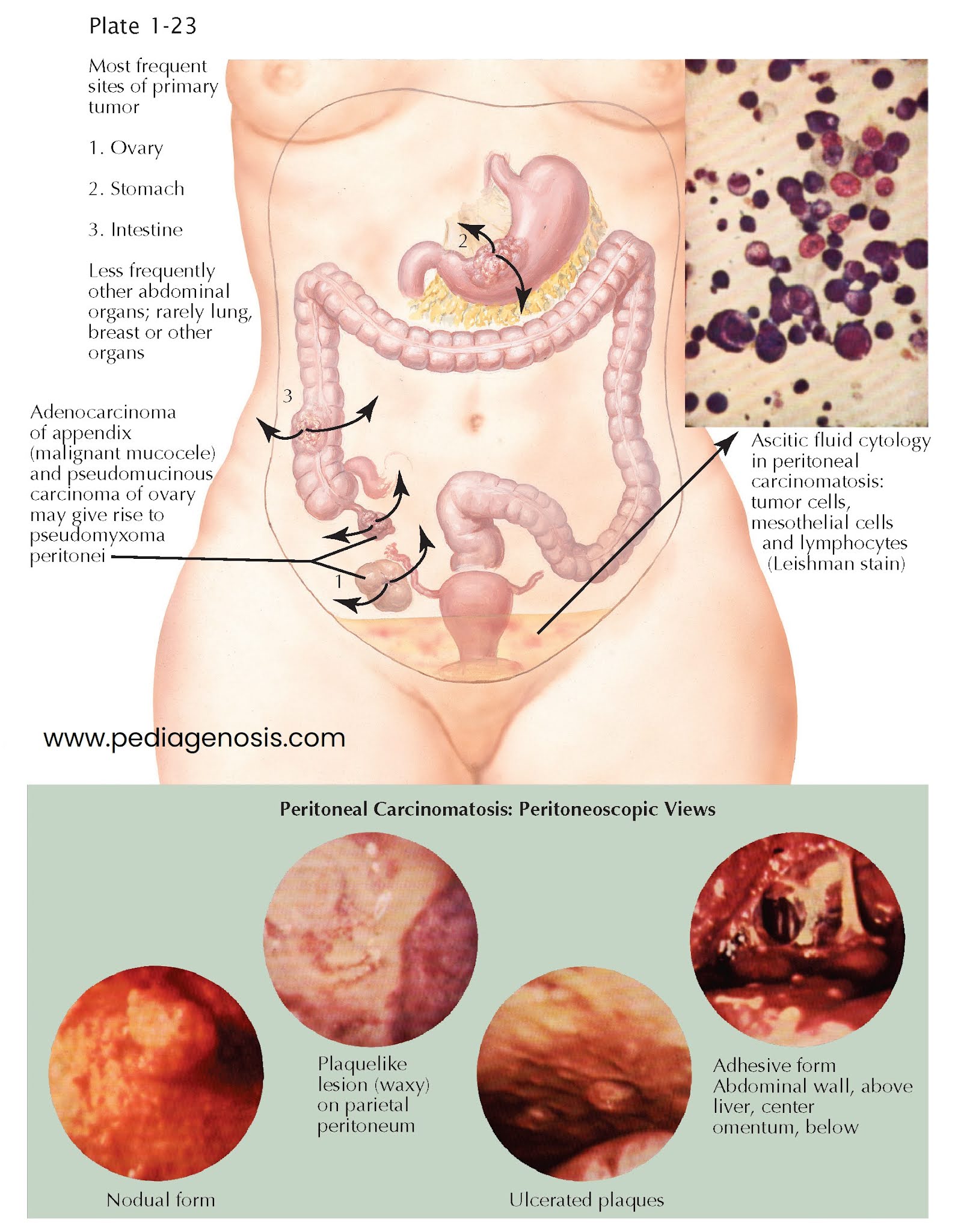 Mesothelioma, the most common primary tumor, is a rare, aggressive tumor arising from mesothelial cells within the serosal lining of the peritoneum, pleura, and pericardium. Though the cause is unclear, there is a strong association with asbestos exposure. Peritoneal mesothelioma is classified as either benign-borderline (multicystic or well-differentiated papillary) mesothelioma or diffuse peritoneal (epithelial, sarcomatoid, or biphasic) mesothelioma.

Normally, the peritoneal stromal tissue is a rich source of growth factor and chemokines. Infiltration of malignant cells often increases exudative secretions and occludes the lymphatics. Accumulation of excess fluid in the peritoneum, (malignant ascites) may be serous, serofibrinous, hemorrhagic, or chylous from malignant fatty degeneration. Chylous pleural effusions, in contrast, are caused by damage to the thoracic duct or its main tributaries.

Peritoneal metastases have various morphologic findings, with the gross pattern dependent on the histology of the primary tumor, manner of spread, and intensity and type of peritoneal reaction. Most common are nodules scattered over the omentum, mesentery tissue, and visceral and parietal peritoneum; smaller nodules, measuring a few millimeters in diameter, are semitranslucent, whereas larger ones are opaque, white, yellowish white, gray, or reddish. When surface growth exceeds growth in depth, plaque-like masses develop, which vary in size and usually have a waxy appearance. Such lesions may be difficult to detect by even the most accurate cross-sectional imaging. Necrotic changes can produce ulcer-like depressions and most commonly occur with metastases from ovarian papillary serous cystadenoma. In the adhesive form, extensive adhesions may develop in the peritoneal cavity due to organized fibrin bands produced by dense exudate, the confluence of adjacent implants, or tumor infiltration from one organ to another. Gastric carcinoma is prone to produce metastases; many experts recommend peritoneal fluid cytologic analysis before one attempts extensive surgical resections. When more advanced, such metastases may merge into a mass that can lead to fistula formation or obstruction. Other types of peritoneal metastases appear as pedunculated nodules or as small sessile or pedunculated cysts. The cause is usually papillary serous cystadenocarcinoma or cystic ovarian tumors. Metastases of appendicular adenocarcinoma or of ovarian pseudomucinous cystadenocarcinoma on the peritoneal surfaces may produce pseudomyxoma peritonei, in which a large quantity of gelatinous material accumulates in the peritoneal cavity. Rupture of a nonmalignant mucocele of the appendix with fistula formation may also lead to accumulation of mucus in the peritoneal cavity.

The symptoms of peritoneal carcinomatosis are chiefly abdominal distention due to ascites and abdominal pain but may include weight loss, anorexia, fever, and diarrhea. Physical examination reveals signs of fluid and, eventually, palpable masses. The differential diagnosis should consider all chronic peritoneal conditions. The initial diagnostic procedure is paracentesis for analysis of fluid, including the cell count, gram-stained smear and culture, acid-fast bacilli stain and culture, cytologic studies, and chemistry testing. Malignant ascites is typically exudative with a low albumen gradient. Cytologic demonstration of tumor cells in ascitic fluid is also diagnostic. False-positive results may occur because reactive mesothelial cells can simulate carcinoma. Immunohistochemistry can also establish the diagnosis. CT scanning and magnetic resonance imaging may show mesenteric thickening, peritoneal studding, a tumor mass, and ascites, though advanced disease may present without radiologic evidence. When the diagnosis remains unclear, peritoneoscopy by laparoscopy permits visualization of peritoneal deposits, cytologic assessment, and/or biopsy.

There is no staging system for primary peritoneal mesothelioma, though one has been proposed. The expected median survival time for peritoneal carcinomatosis is 1 to 2 years. Local invasion of the liver, abdominal wall, diaphragm, retroperitoneum, gastrointestinal tract, and bladder commonly occurs. Treatment involves a multidisciplinary approach, combining cytoreductive surgery, chemotherapy, hyperthermic perioperative intraperitoneal therapy, and irradiation. Surgical intervention can be palliative for debulking, particularly when intestinal obstruction is present.