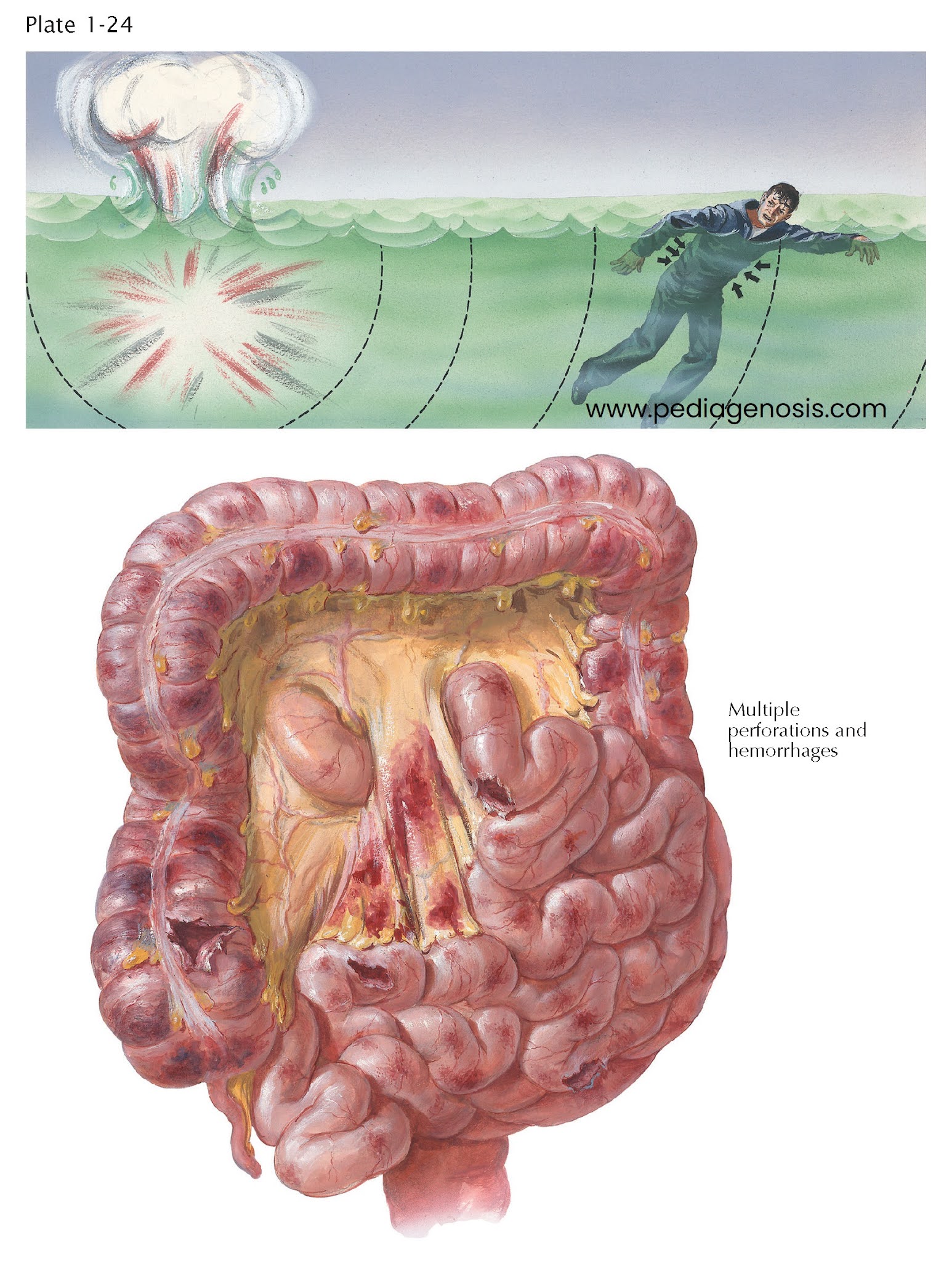 Abdominal wounds and blunt trauma are common acute injuries encountered in emergency settings. The depth and severity of a penetrating wound cannot be determined by history or physical examination alone. After stabilizing the airway, breathing and circulation, emergency cross-sectional imaging is essential as the operating room is being prepared and surgical expertise recruited. Broad-spectrum intravenous antibiotics should be hung on admission as the patient is prepped for operation. If extensive intraabdominal bleeding is occurring, laparotomy should be done as early as possible. Exploration must be thorough, and all perforations must be closed. Diversion of the fecal stream is often advised when there has been peritoneal soiling. In extensive damage, resection is necessary. In addition to customary preoperative and postoperative measures, oxygen, continuous gastroduodenal suction, multiple drains, and broad-spectrum antibiotic therapy are essential.

Blunt and immersion or “underwater” blast injuries of the abdomen are challenging. Blast-related injuries occur from one of four mechanisms. Primary blast injuries are caused when the blast wave propagates from the detonation center through the victim, causing damage to predominantly air-filled organs; the small intestine is the visceral organ most commonly injured. Effects of the blast wave are far more pronounced than in a closed space because instead of dissipating, the wave may be enhanced as it reflects and reverberates off surfaces. In immersion or “underwater” injury, underwater explosions produce waves; the soft abdominal organs and, to some extent, intrathoracic organs suffer the most damage. The severity of the impact or size of the charge, distance from the explosion, amount of gas in the hollow viscera, and, perhaps, position and degree of submersion influence the extent and type of injury. Tertiary blast injuries occur when a victim is physically displaced or crushed by forceful air movement or a motor vehicle collision or is crushed by a structural collapse. Quaternary injuries include burns and inhalation injury.

Intestinal tract injuries from blunt trauma or blasts consist primarily of intramural hemorrhages and perforations. The former are mostly multiple and petechial and involve the submucosal and subperitoneal layers of the small intestine, especially the lower ileum and cecum; therefore, the severity of the injury may be underestimated on examination of the peritoneal surface. The stomach, esophagus, colon, mesentery, and omentum may also be injured. Injuries vary widely in size and shape. Larger lesions can occur in the colon and, if massive, may lead to gangrene of the bowel. Bleeding also occurs in the loose areolar retroperitoneal tissue. Perforations or tears are less frequent and are more likely to involve the small intestine. They are circular or linear, with everted edges and a blown-out appearance. Generalized or localized peritonitis often appears later. Alternatively, there may be signs of frank perforation at the outset.

Coincident with the explosion, the patient experiences a shock-like sensation, a gripping pain, a temporary paralyzing numbness of abdomen and legs, testicular pain, or an urge to urinate or defecate. Severe, sharp, and stabbing or colicky abdominal pain soon develops. Severe nausea, hematemesis, bloody diarrhea, and diffuse abdominal tenderness may develop. Rigidity appears in cases with perforation, along with physical findings of peritoneal irritation, including guarding and severe rebound tenderness, which can become pro- nounced and usually portend the presence of free air in the peritoneal cavity. Symptoms may subside relatively rapidly in the absence of perforation or pancreatitis. Evidence of blast injury to the lung may be present. Cautious observation is essential because intraabdominal hematomas can lead to perforation as late as 2 weeks following injury.

The prognosis depends on the extent of visceral injury; mortality rates in cases without intestinal perforation are probably not above 10%, whereas in cases with intestinal perforation, mortality rates can be over 25%. Early deaths are due to shock and late deaths to peritonitis. Associated injury of the lungs increases the gravity of the condition. If there are clinical or radiographic signs of perforation, laparotomy should be per- formed as early as possible.

When it is fairly certain that no perforation has occurred, treatment is conservative and like that of other nonpenetrating abdominal injuries. Resuscitative measures must be instituted early, but plasma and blood transfusions should be administered cautiously in cases of lung injury. For the same reason, delivering effective general anesthesia is challenging. Prognosis depends on the extent of visceral injury, the time to intervention, and the presence of associated injuries to other organs. Late deaths due to peritonitis or delayed bleeding should be avoided.