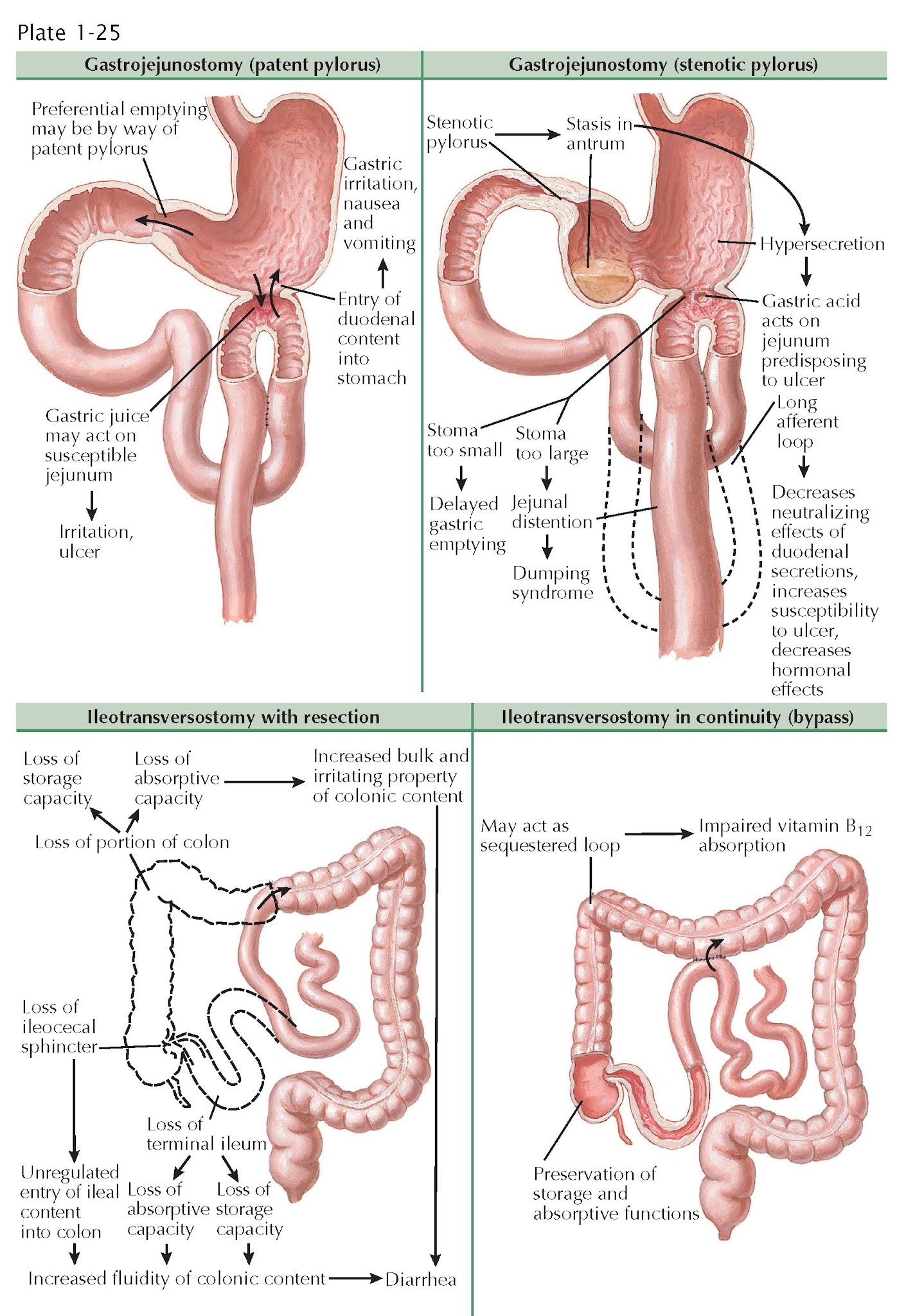 Creation of a well-constructed ostomy by a highly skilled surgeon at the site of an anastomosis or as a cutaneous stoma that preserves normal digestive functions can result in an excellent quality of life for a patient undergoing resection of portions of the digestive system. Technical risks associated with the creation of any stoma include anastomotic leak, dehiscence, and stricture. The size of the anastomosis varies with the organs involved and the desired outcome of the procedure, but it is important to note that while stricture-related closure is always a risk, larger stomas are not always better. Cutaneous ostomies have an additional risk of prolapse, bleeding, and peristomal ulceration. Evaluation of ostomy function and anatomy may require skilled radiologic assessment with barium studies, CT studies, or endoscopy, or a combination of these studies. Endoscopic evaluation also provides the potential for therapeutic interventions to correct stomal problems, including dilatation and placement of self-expanding stents.

Esophagogastrostomy is one of the most challenging of surgical anastomoses. The position of the distal esophagus is significantly influenced by the posture of the patient, and a foreshortened esophagus is prone to dehiscence from the anastomosis if the stomach is not freed adequately from its position in the abdomen to be pulled high enough into the chest. The gastric portion of the anastomosis is prone to ischemia and dehiscence if an adequate blood supply is not provided as the surgeon frees up the stomach and pulls it into the chest. Leakage of the ostomy has a particularly high risk of becoming a life-threatening complication when it occurs in the mediastinum, where it will be adjacent to the vital structures of the trachea, lungs, aorta, and heart. For this reason, esophagogastrostomies are typically safer if adequate resection of the gastroesophageal junction can be performed and still permits a low anastomosis or if the stomach is pulled through the mediastinum or retrosternally and anastomosed in the neck where any leak can be easily addressed.

Gastrojejunostomy is one of the most common surgical ostomies. In previous years, gastrojejunostomy was most commonly performed to treat recurrent peptic ulcer disease. Since the advent of effective medical therapy for peptic ulcer disease, partial gastrectomy with gastrojejunostomy is rarely needed. In fact, even when the patient has a bleeding duodenal ulcer resistant to endoscopic treatment, an ostomy is rarely created because of the risk of performing this complex surgical procedure in the setting of a surgical emergency procedure. Instead, oversewing of the ulcer with or without a selective vagotomy is the procedure of choice. This surgery is followed by treatment of Helicobacter pylori and/or education as to the risk of using nonsteroidal antiinflammatory drugs. Gastrojejunostomies are more commonly performed following subtotal gastrectomy for gastric cancer, following gastric outlet obstruction from peptic ulcer–related stricture or extrinsic tumor, or as part of an obesity bypass procedure.

Subtotal gastrectomy and anastomosis of the proximal stomach to the jejunum eliminates or severely impairs several important functions of the stomach and proximal duodenum, resulting in severe impairment of normal digestive functions. The benefit of the adaptive capacitance of the fundus and gastric body, as well as receptive relaxation of the stomach, is lost when a sub- total gastrectomy is performed. Although this is one of the goals of obesity bypass surgery, it can contribute significantly to further weight loss in a patient recovering from gastric cancer surgery. The size of the residual stomach is therefore an important influence on the size of a meal that the patient can tolerate following partial gastrectomy.

With resection of the distal stomach, gastric peristalsis can no longer triturate food into particles smaller than 4 mm (which it had easily been able to do for most foods). If food is swallowed with minimal mastication, the residual stomach is prone to develop bezoars unless the anastomosis is large. When distal gastrectomy leads to loss of the pylorus, indiscriminate gastric emptying develops. Loss of the sieving function of the pylorus permits solid material to enter the jejunum. Larger materials have much less surface area on which digestive enzymes can act to reduce them to basic molecules for absorption. Loss of the regulatory functions of the pylorus and duodenum also results in adverse effects from rapid emptying of liquid gastric contents. A common complication of gastrojejunostomy is the development of a peptic ulcer distal to the anastomosis. This occurs for three reasons: (1) there is rapid emptying of gastric fluids with high concentrations of acid; (2) the jejunal mucosa is more susceptible to injury by gastric juice than is the duodenal mucosa; and (3) alkaline bile juice refluxing into the stomach can increase acid secretion. Emptying of the gastric contents directly into the jejunum, besides predisposing to jejunal ulcer, as mentioned above, may also lead to the postprandial syndrome of abdominal distress, sweating, weakness, and syncope resulting from jejunal distention known as the dumping syndrome. A host of other complications are well documented from the loss of hormonal and neural regulation of digestion by the duodenum. Positioning of the gastrojejunostomy below the point at which the proximal duodenum remains connected to the sphincter of Oddi also has associated risks; this results in a blind loop and multiple related complications described as afferent and efferent loop syndromes. The general recommendation is to limit the length of the afferent jejunal loop.

Ileocolostomy is needed after resection of the terminal ileum and portions of the colon. Functional changes following ileocolostomy are determined by the length of ileum removed, the underlying disease, and the degree to which colonic contents reflux into the small intestine. Extensive resections of the colon can result in a diminished storage capacity of the colon, with acceleration of colonic passage time, diminished absorption of fluid, and corresponding reduction in consistency of the fecal residues. Resection of the ileum can result in impaired vitamin B12 absorption, decreased bile salt absorption leading to choleretic diarrhea, and loss of important ileal mucosal hormones responsible for regulation of small intestinal transit, known as the ileal brake.

Permanent ileostomy is sometimes necessary for extensive Crohn disease or ulcerative colitis. Ileoanal anastomosis is preferred for severe ulcerative colitis and colonic polyposis syndromes but is not recommended for Crohn disease. If the ostomy is too narrow or strictured, a dilatation may develop adjacent to the stoma. Other complications from a stoma include excess fluid losses resulting from extensive small bowel resection or underlying enteritis, vigorous peristaltic contractions that may produce a “noisy” ileostomy, and leakage around the ostomy that may lead to irritation of the peristomal skin. Satisfactory appliances and adhesive materials and education and care of the patient by a team of experts, including an expert ostomy nurse, are needed for a good outcome. 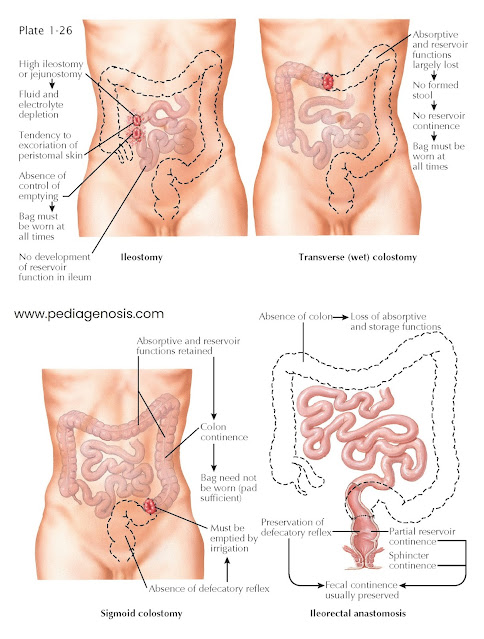 Colostomy is usually performed for neoplasms of the sigmoid colon or diverticulitis. Unlike ileal fluids that are always liquid, distal colonic contents may become inspissated. In this case, the colostomy must be irrigated regularly to evacuate the fecal content mechanically. Keeping the fecal contents semi-liquified is preferred.

Anastomosis of the ileum to the anus (ileoanal anastomosis) is the procedure of choice for total colectomy, including ulcerative colitis and diffuse polyposis of the colon. The aim of the procedure is to permit controlled defecation through the natural orifice by preserving the anal sphincters. Reducing fluid volumes presented to the rectum is achieved by creating a J-shaped ileal pouch. Immediately following surgery, the patient must deal with a high frequency of bowel movements. Diarrhea typically decreases over time to four to seven bowel movements daily, one or two of which will be at night. Leaving a sleeve of rectum to create an ileorectal anastomosis should be avoided because it will continue to provide a risk for recurrent colitis or cancer, depending on the initial indication for total colectomy. Fecal incontinence is a common complication, particularly during sleep, when volitional control of the sphincter is diminish d. Inflammation of the J-pouch may result in pouchitis.