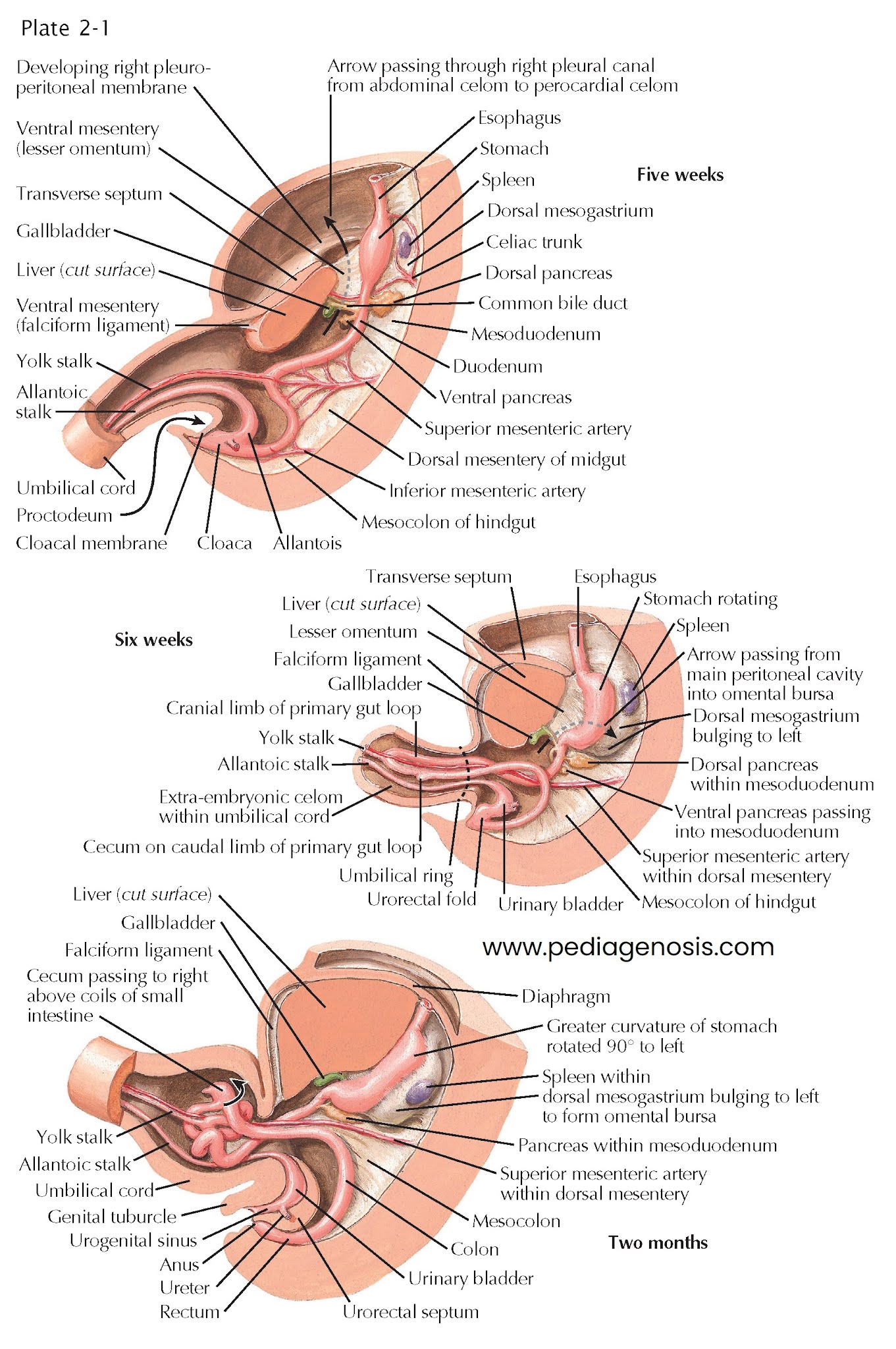 The small intestine includes the duodenum, jejunum, and ileum. During development of the gastrointestinal system, the duodenum comes from the distal portion of the foregut, whereas the jejunum and ileum come entirely from the midgut. The duodenum moves to the right of the midline as the stomach rotates and shifts to the left side of the abdomen during weeks 4 to 6 of fetal life. As development proceeds, the common bile duct moves to the posterior side of the gut tube as the stomach rotates and the liver enlarges. One aspect of duodenal development that is clinically important is that during weeks 5 and 6, the epithelial lining of the duodenum, derived from the endoderm, proliferates to the point that it completely blocks the lumen of the duodenum. However, the lumen of the duodenum typically recanalizes so that the fetus can begin swallowing amniotic fluid. If the lumen of the duodenum does not recanalize or opens incompletely, duodenal atresia or stenosis will occur. As a region of gut that links the foregut and midgut, the duodenum is supplied by branches of both the celiac and superior mesenteric arteries. The descending and horizontal portions of the duodenum are the regions where this anastomosis occurs, and these are also the regions in which atresia or stenosis is most likely to be manifested.

The jejunum and ileum are, in their entirety, midgut structures and are supplied by branches of the superior mesenteric artery. As it elongates, a loop of midgut herniates into the umbilical cord, with the superior mesenteric artery extending between the loop’s proximal limb (cranial) and distal limb (caudal). The vitelline duct extends off the apex of the loop, connecting the midgut temporarily to the secondary yolk sac. The proximal limb of the midgut loop will become the jejunum and ileum, and the distal limb will become the terminal ileum, cecum, appendix, ascending colon, and transverse colon. Although it may sound as though the proximal and caudal portions are unbalanced, the jejunum and ileum elongate tremendously, creating many loops within the umbilicus. While in the umbilicus, the midgut rotates 90 degrees in a clockwise motion (when viewed from the perspective of the embryo) and also becomes elongated. This rotation moves the proximal limb to the right and the distal limb to the left side of the cord. During the 10th week, the midgut begins to return to the abdominal cavity, which has grown more expansive as the relative size of the liver and kidneys decreases. As the loop of midgut finishes returning to the abdomen in the 11th week, it undergoes a further 180-degree rotation around the superior mesenteric artery, with the proximal limb moving to the left side of the body (where most of the jejunum will be found) and the distal limb moving to the right side of the body (where you will typically find the distal ileum, cecum, appendix, and ascending colon). During this process, the ileum loses its connection to the vitelline duct, unless it remains as a blind pouch (ileal or Meckel diverticulum).

The dorsal mesentery of the duodenum lays back and fuses with the parietal peritoneum of the posterior body wall to become secondarily retroperitoneal. The jejunum and ileum retain the posterior mesentery; it allows these mesenteric organs a degree of freedom within the abdominal cavity. Because the stomach and the proximal jejunum have a mesentery, the first and fourth portions of the duodenum may have a small mesentery. The morphologic changes of the midgut during development are largely complete at this time, apart from growth as the individual grows during child-hood and adolescence. The further developmen of the large colon will be covered in the next section.