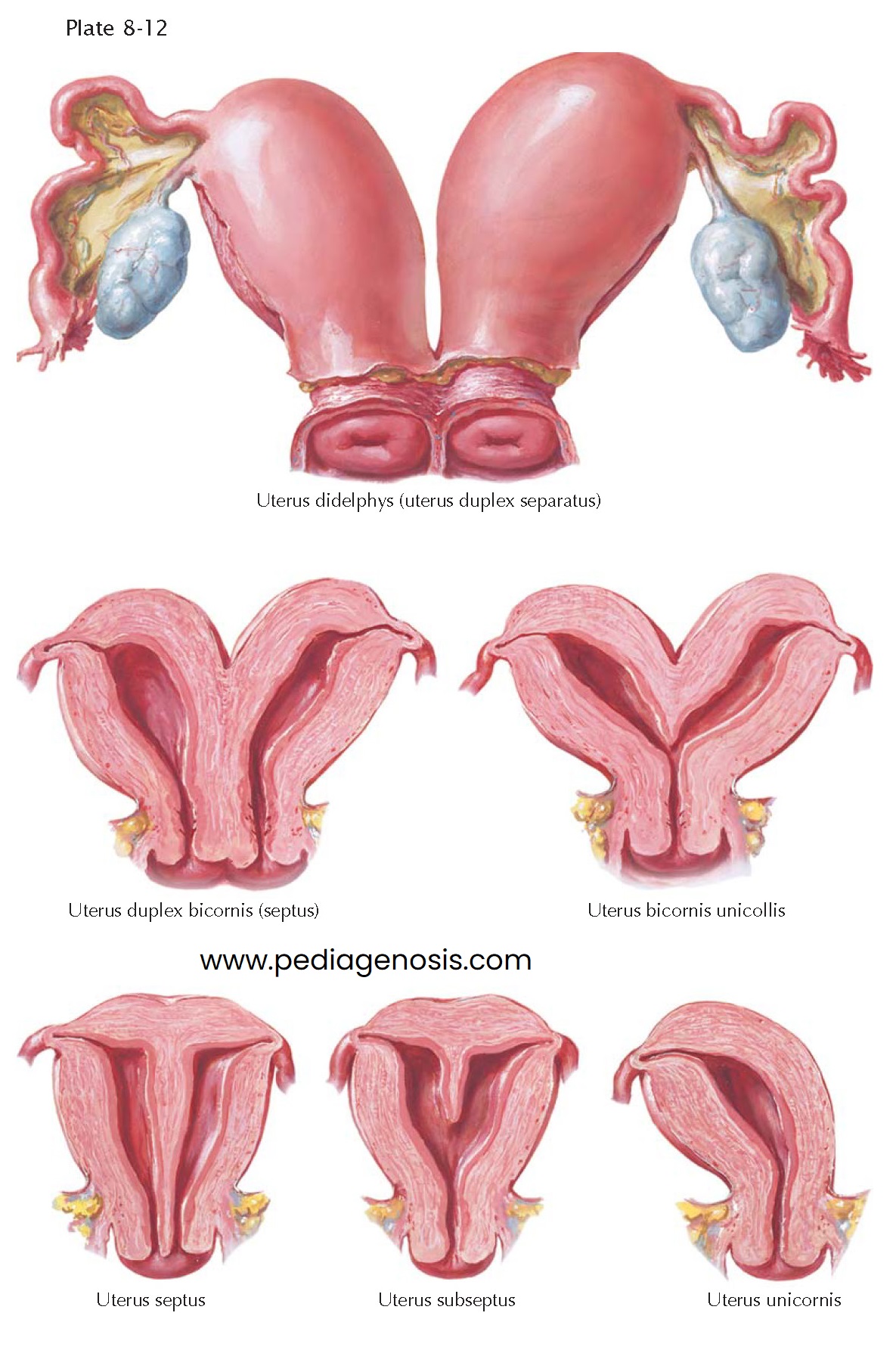 The female genital tract develops from paired embryo- logic structures, the müllerian ducts, which give rise to the tubes and uterus as well as the upper two-thirds of the vagina. The upper or cephalic portion of the müllerian ducts, shortly after having made its appearance during the second month of fetal life, develops and courses longitudinally, parallel and lateral to the wolffian (mesonephric) ducts. In the caudal region of the mesonephros, the müllerian ducts approach the midline, taking an oblique route for a short distance while crossing the wolfﬁan ducts, then turn again, assuming a longitudinal direction now medial to the wolfﬁan ducts. In this proximal part, the right and the left müllerian ducts approach each other and ﬁnally fuse to form the uterovaginal canal. The cephalic, originally longitudinal, part of the ducts are transformed and differentiate into the fallopian tubes. The short part, in the region where the wolfﬁan duct is crossed in the early stages, gives rise to the uterine fundus and the uterine–tubal junction, whereas the uterine cervix and the vagina take their origin from the lower longitudinal portion of the müllerian ducts. The uterine corpus develops from a very small part of the müllerian ducts, a fact that explains the ratio of cervical length to the length of the entire uterus during fetal life and long after, until the ovarian hormones display their effect on the responsive tissue of the uterine body.

Incomplete fusion of the müllerian ducts will result in a variety of congenital anomalies of the reproductive organs. Anomalies of uterine development are relatively common, with the frequency ranging from about 1/200 to 1/600 women; however, septate or arcuate uterine anomalies may be present in up to 3% of women.

In its most extensive form with complete nonfusion of the müllerian ducts, duplication of the cervix and vaginal canal also may occur. When this occurs, one of the fallopian tubes is attached to the lateral angle of each hemiuterus. This form is called uterus didelphys or uterus duplex separatus. Each of these two organs may function separately and sustain a normal pregnancy, although there is a higher incidence of miscarriage, preterm labor and delivery, intrauterine growth restriction, and abnormal lie of the fetus. The two resulting halves may be of unequal size or volume.

This complete failure of the müllerian duct to fuse is rare. A more frequent abnormality occurs when there is only partial fusion of the ducts, as is the case in the uterus duplex bicornis or bicornuate uterus. Two uteri result that have in common a medial wall fully equipped with endometrial and myometrial structures. These two uterine bodies may be present with only a single cervix (uterus bicornis unicollis) or two cervices (uterus bicornis bicollis), depending on the level of disrupted fusion. In some cases the uterine cavities are separated by a thin septum. When the septum entirely divides the uterine bodies, the organ is called uterus septus or septate uterus. Uterus subseptus is the term used to describe partial separation.

Occasionally, one müllerian duct may be very rudimentary, or it may even fail to develop at all. The half uterus (uterus unicornis, unicornuate uterus), arising from only one müllerian duct and its single attached tube may be well formed and may function quite normally.

Uterine aplasia has been described repeatedly. Although in these cases the uterus is absent anatomically, rudimentary segments of the müllerian duct are usually found in varying degree, from a ﬁbromuscular ribbon to minute particles of the former duct. The tubes in such cases may be present and end blindly.