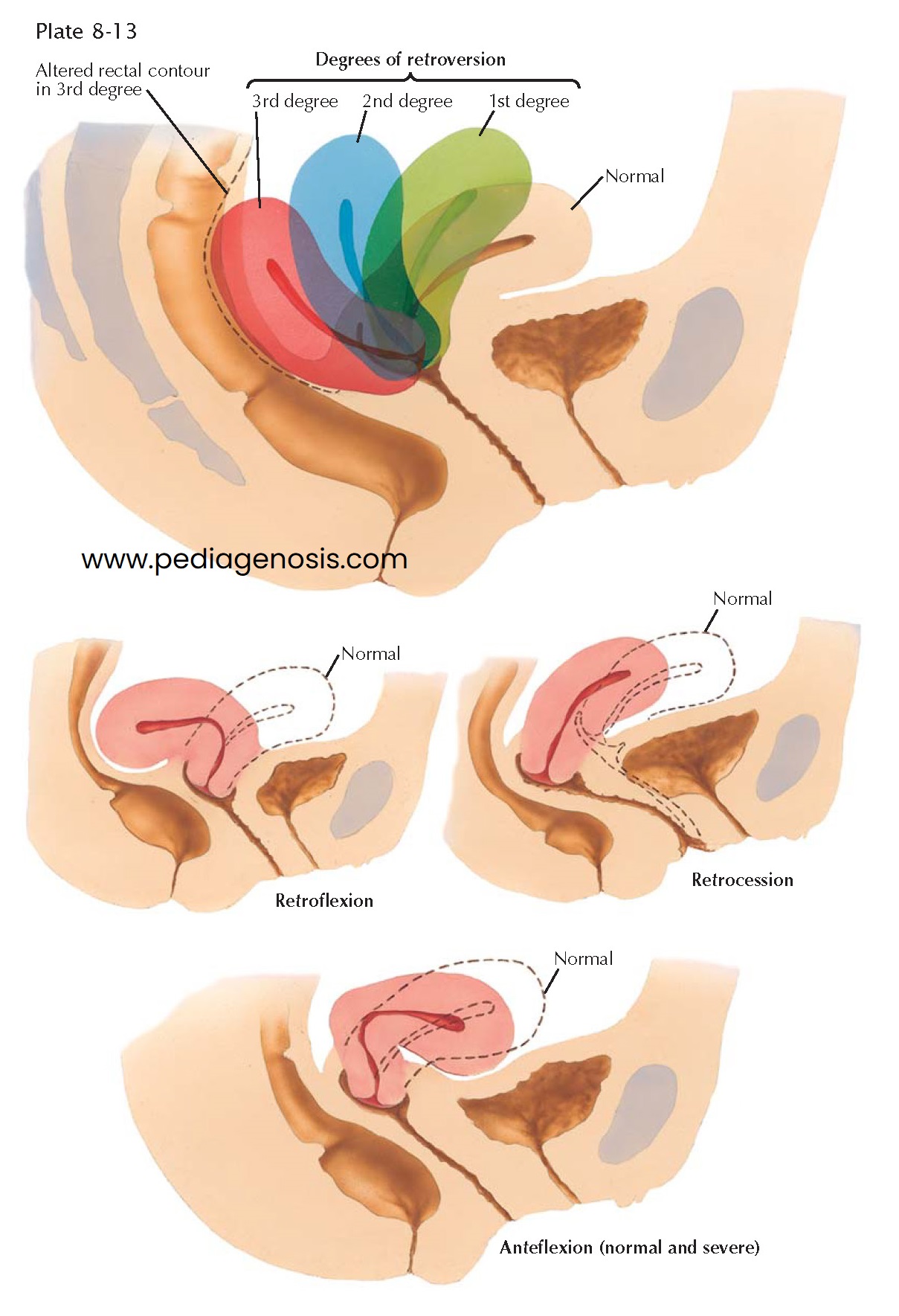 Minor variations in position of the uterus occur constantly with changes in posture, with straining or with changes in the volume of bladder content. Only when the uterus becomes ﬁxed or rests habitually in a position beyond the limits of normal variation should a diagnosis of displacement be made and it should be considered pathologic only when such a position results in symptoms.

In the erect position, the cervix bends approximately at right angles to the axis of the vagina. The corpus curves slightly forward, and the uterus thus rests in an almost horizontal position on top of the bladder. It is maintained in this position by intraabdominal pressure exerted by the intestines against the posterior surface of the corpus while standing or sitting; the intrinsic tone of the uterine musculature and the speciﬁc ﬁbro-muscular bands or ligaments in the pelvis, namely, the round ligaments, the cardinal ligaments, and the utero-sacral ligaments; and the fasciae and muscles of the perineum.

Retrodisplacement most frequently occurs after parturition when the stretched ligamentous supports are no longer able to counteract the intraabdominal pressures and when the uterus, during involution, may be lacking in normal myometrial tone. The fundus is thus forced backward toward the sacrum.

Less frequently, retroposition of the uterus results from adhesions caused by endometriosis, tumors, or infections, such as pelvic inﬂammatory disease, that hold the uterine corpus in a ﬁxed posterior position. Occasionally, in aged women, backward displacement results from postmenopausal atrophy and loss of muscular tone of the uterine body and the suspensory structures.

First-degree retroversion includes all deviations from the anterior position in which the cervix-corpus axis points anterior to the axis of the vagina. This is common and of no clinical signiﬁcance. When the cervix and corpus point directly along the axis of the vagina, the retroversion is designated as second degree or mid-plane. Any deviations beyond this point are termed third degree, or true, retroversion. Clinically, the ﬁrst-degree changes are of little consequence, are often transient and no doubt occur physiologically. Second-degree displacements are very common, without refer-able symptoms.

In obese patients, this diagnosis often must be made by demonstrating that the endocervix extends straight back, whereas the fundus can be felt neither anteriorly over the symphysis nor posteriorly in the cul-de-sac of Douglas. In third-degree retroversion, the examining ﬁnger comes upon the corpus lying directly back on the anterior surface of the rectum.

The term retrocession describes a slumping backward of the cervix and vaginal apex toward the coccyx, with the uterine relationships otherwise normal. It is generally associated with anteﬂexion, a forward bend of the corpus at the isthmus, which brings the fundus under the symphysis.