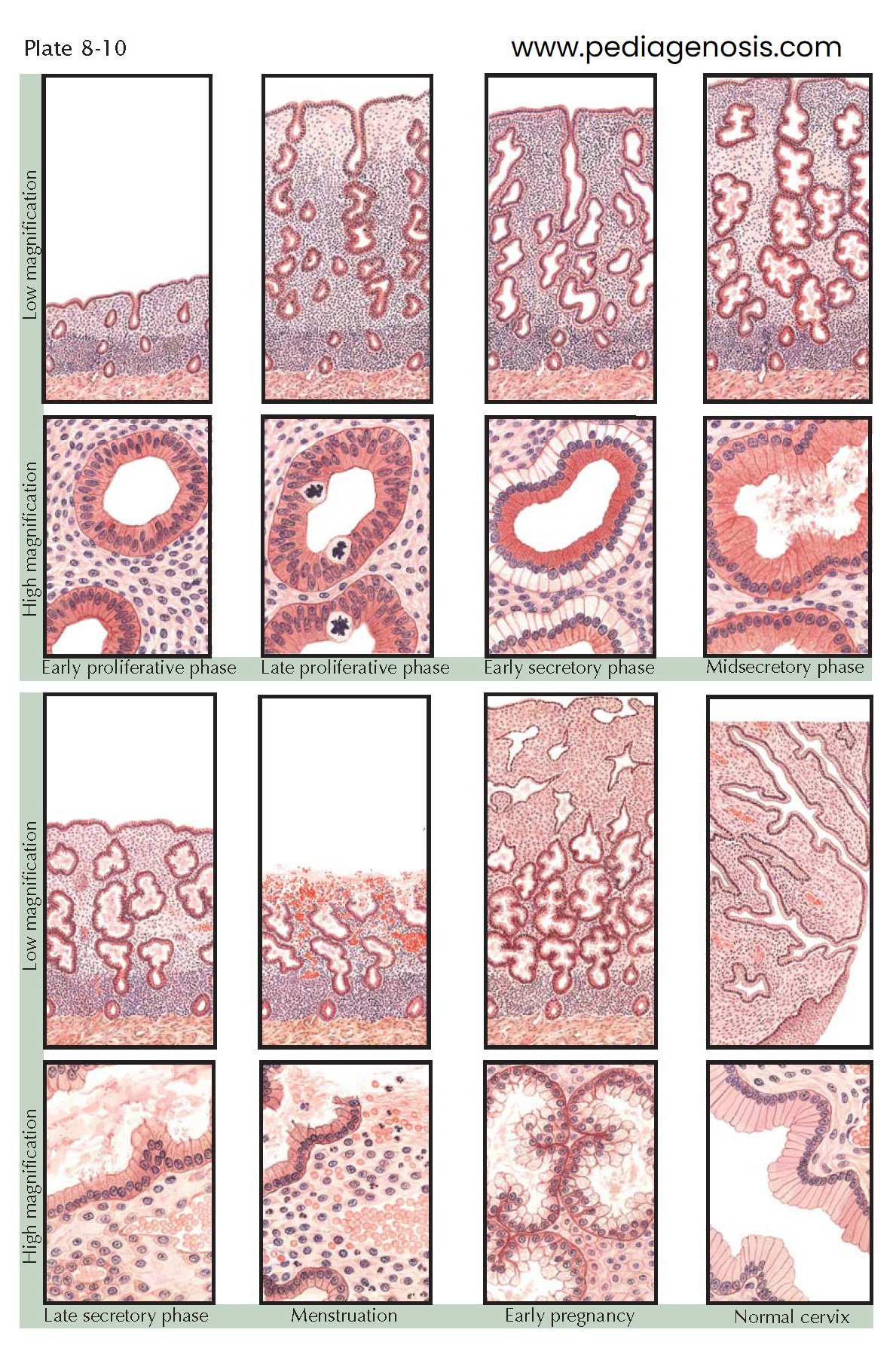 In the early proliferative phase of the menstrual cycle the endometrium is thin, and relatively homogeneous. The glands are simple and straight, leading directly from the base to the surface. Under high-power magniﬁcation, an occasional mitosis may be seen in the low columnar epithelial cells. A similar picture is found in prepubertal or postmenopausal endometrium, except that the endometrium is even thinner, consisting only of the basalis layer resting on the myometrium, and the glands are wholly inactive, the shrunken nuclei are pyknotic, and no mitoses appear to be present.

The late proliferative stage demonstrates marked growth in glands and stroma, with tortuosity of the glands and corkscrew convolutions. The stroma cells of the superﬁcial layer may be separated by edema, and mitoses are frequently seen. The epithelium is higher and more columnar, and the nuclei are disorderly placed, both centrally and peripherally, at different levels in the cells.

Within 2 or 3 days after ovulation, the early signs of the secretory phase induced by progesterone are clearly visible. The endometrium shrinks slightly in thickness as the edema of the superﬁcialis is lost. In the epithelial glands, the nuclei are now rounded and are arranged more or less in line in the middle of the cell. The cyto- plasm of these cells is condensed toward the lumen by the accumulation of glycogen-rich secretions basally, but with hematoxylin and eosin staining this appears as a subnuclear empty space or vacuole. Mitoses are less common and disappear entirely by about day 20 of the cycle.

From day 21 through day 25, the endometrium is in active secretion; edema is now grossly apparent in the midlayer, so that the total thickness of the endometrium reaches a maximum. The glands take on a distinctive jagged or saw-toothed appearance. The round nuclei sink to a basal location, while secretions form vesicles at the luminal margin, which are disgorged into the gland lumen and leave the impression of a frayed and shaggy cellular edge. Arterioles exhibit a major increase in growth and tortuosity. Capillaries are prominent in the superﬁcial layers, and contiguous stromal cells are ﬁrst noted to become swollen and pale-staining.

Through the last 2 or 3 days (late secretory phase) of the cycle, regressive changes are found to coincide with a decrease and, ﬁnally, cessation of function of the corpus luteum. Endometrial intracellular edema is resorbed, causing shrinkage in total thickness of the endometrium. Superﬁcially, the stroma cells accumulate cytoplasm in a dense layer called predecidua. The sectioned glands are widely dilated and ﬁlled with secretion and cellular debris. The glandular epithelium appears inactive, the cells are low columnar or cuboidal, and the nuclei are often pyknotic. With impending menstruation, an extensive diapedesis of red and white blood cells is seen in the stroma.

The process of menstruation ﬁrst begins by a pooling of blood cells in intercellular spaces beneath the surface epithelium. Breaks in the surface occur, and pieces of stroma and broken glands are lifted off. Desquamation of the top layers down to the basalis takes place in 2 or 3 days. There are increased numbers of lymphocytes and polymorphonuclear leukocytes; the epithelial cells are characterized by pyknosis and fragmentation.

If conception has occurred, the secretory activity of the endometrium is maintained and increased by the corpus luteum of pregnancy. In a full-thickness specimen the thick, well-developed, true decidua extends well down into the midlayers, which are crowded with “saw-toothed” glands. The functioning cells are large, with basal, round, vesicular nuclei, ﬁlled with coarse granules except at the translucent luminal margin, where a dis- tinct cell membrane balloons out into the gland lumen.