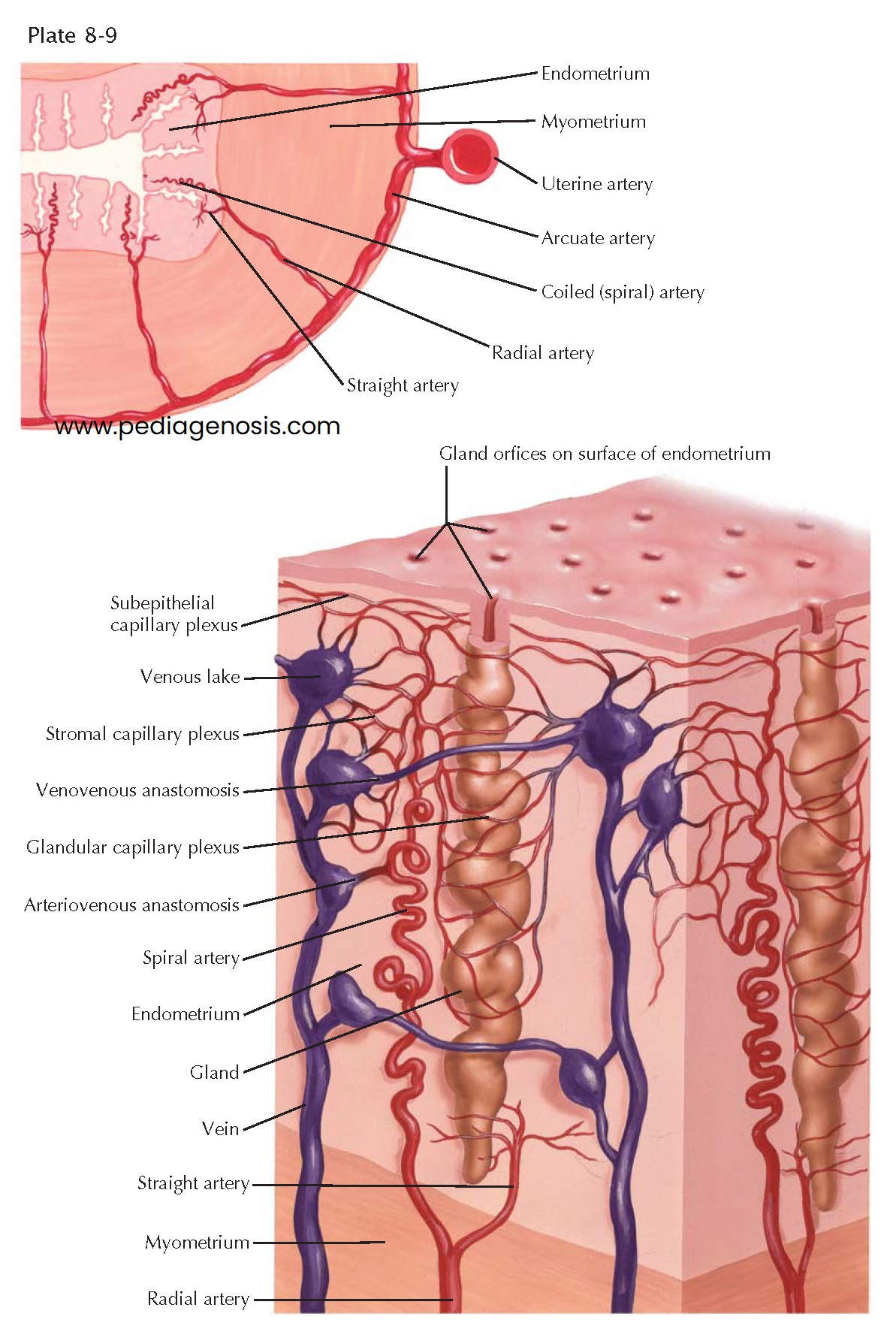 The arcuate arteries, which arise from the ascending and descending branches of the uterine arteries, circle the uterus just beneath the serosal surface. At intervals, they give off radial branches, which penetrate directly inward through the myometrium. Before entering the endometrium, the terminal branches of the radials divide into two distinct types of arteriole: straight and spiral arterioles.

The short, straight arterioles supply only the deeper third of the endometrium, ending in a more or less horizontal arborization of terminal twigs. These arterioles are not affected by cyclic hormonal changes; there-fore, they maintain a continuous circulation, and the area that they supply (the deepest third of the endometrium) does not take part in the menstrual slough and necrosis. The basal layer, thus continuously nourished and left intact during menstruation, provides the gland with remnants from which regrowth of the entire epithelial thickness takes place during the intermenstrual period.

The spiral arterioles, on the other hand, reach to the surface of the endometrium and exhibit marked changes in response to hormonal changes through the normal cycle. Branches are given off to invest glands and to supply the stroma. Arteriovenous and venovenous anastomoses have been demonstrated that develop particularly during the secretory phase of the cycle. In the superﬁcial layer, a diffuse arteriovenous capillary network terminates in venous lakes or sinusoids.

This complicated vascular pattern, unique to the endometrium, was once believed to be the mainspring of the processes that enact the rhythmic necrosis and hemorrhage called menstruation. The spiral arterioles undergo extraordinary lengthening during the ﬁrst or proliferative phase of the cycle. The stromal elements proliferate also, but at a much slower rate. As a result of this difference in growing speed, the spiral arteries are thrown into complex kinks and coils. This coiling would be even more marked were it not for the simultaneous accumulation of interstitial edema ﬂuid that starts with the ﬁrst preovulatory peak of estrogen production. A second period of ﬂuid retention is found at the height of steroid production by the corpus luteum later during the cycle. This “waterlogging” of the uterine mucosa may reﬂect the sodium- and chloride- retaining action of progesterone via renal mechanisms, which is an attribute held in common by all steroid hormones. As a result, the spiral arteries are somewhat stretched during the time of greatest luteal activity. In the absence of a fertilized, implanted ovum, the corpus luteum begins to degenerate a few days before the end of the cycle. This then is accompanied by the fall in blood levels of estrogen and progesterone and, consequently, by a resorption of the interstitial ﬂuid. The endometrium shrinks, becomes denser, and forces the spiral arteries to kink and “buckle.” A slowed-down circulation, or even stasis, ensues.

From 4 to 24 hours preceding the onset of menstrual bleeding, an intense vasoconstriction and vascular clotting are seen. The vasoconstriction, together with the antecedent buckling, was thought to lead to severe ischemia and therewith necrosis of the superﬁcial parts of the endometrium, progressing to the actual desquamation of menstruation. Based on human perfusion studies, we know that this is not the underlying mechanism of menstruation. Rather, the initiation of menstrual sloughing occurs as a result of direct enzymatic digestion of the superﬁcial tissues, which is hormonally dependent in that progesterone withdrawal induces the expression of matrix metalloproteinases. At the end of this digestive process, coagulation takes over, a platelet plug ﬁrst occurs with the more organized coagulation cascade following; then vasoconstriction of vessels occurs and reepithelialization of endometrial tissues takes place, generated from the undisturbed basal layers.