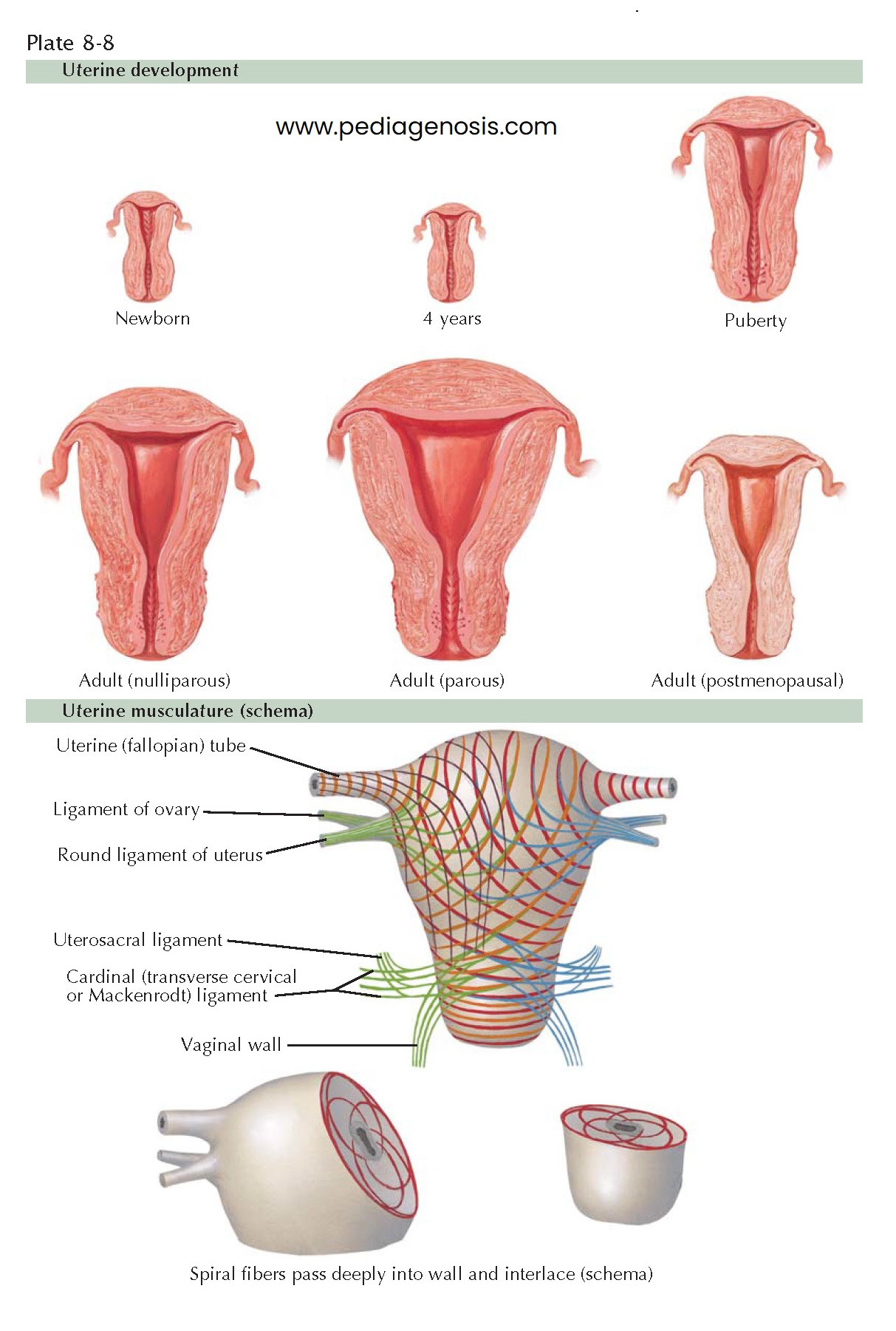 In response to the ebb and ﬂow of estrogenic secretions, the uterus exhibits two patterns of growth and development—one a lifelong curve from infancy to senility, and the other a transient recurrent increment and recession due to the swings of ovarian activity in each menstrual cycle.

Up to the seventh month of fetal life, the uterus grows in proportion to the rest of somatic development. Thereafter, a disproportionate acceleration in size takes place; this is considered to be a speciﬁc response to the high level of estrogens present in the mother as she approaches term.

Within a few days after birth, the infant’s uterus shrinks somewhat because of the abrupt withdrawal of maternal hormones, which may even, at times, be sufﬁcient to result in some vaginal spotting or frank bleeding. Thereafter, the size of the uterus remains static until, as a prelude to the menarche, the ovaries start to produce hormones.

Uterine growth is one of the earliest signs of puberty and generally precedes the menarche by 1 or 2 years. In 60% of girls, the uterus reaches adult size by the 15th year. By this time, a difference in proportion of length of the cervix to that of the fundus becomes evident. In the newborn and prepuberal uterus, the ratio of cervical length to that of the corpus is approximately 1:1. However, in the adult this ratio becomes 1:2 or greater. Measuring the distance from the external to the internal cervical os using a uterine probe and then measuring the total length of the uterine canal may conﬁrm the diagnosis of an infantile organ in the adult.

When mature, the uterus is about 8 to 10 cm long. The uterine width at the top measures 7 by 5 cm. It narrows to a diameter of 2 to 3 cm at the cervix.

Repeated pregnancies leave the uterus larger than in the nulliparous woman. After the menopause, and its associated loss of hormonal stimulation, shrinking and atrophy progress. The senile uterus, with its thinned-out myometrium, often retrogresses to the size of the preadolescent stage. The ratio of cervical length to overall size often regresses to that found before puberty. Because the uterus is formed by fusion of the müllerian ducts, its muscular structure is rather complex. The external longitudinal and internal circular ﬁbers in the tubes are conﬂuent with those in the uterus. Indeed, although the deep, spiraling, circular ﬁbers sweep around the uterus in both clockwise and counterclockwise directions, each set is motivated independently by contractions that originate in each of the tubes. It appears that peristaltic waves initiated in the tubal walls act as lateral pacemakers for uterine contractions, which sweep down the fundus to the cervix. During labor, an element of rhythmicity results from a wandering pacemaker system of independent foci of initiator signals and strong interconnections between the cells through cellular gap-junctions.

Smooth muscle bundles contained in the supportive ligaments interdigitate with the circular muscle system of the uterus. The importance of this complicated and interlaced system, embracing tubes, uterus, and ligaments, is realized during the menstrual cycle, where smooth muscle contractions are found to be a function of ovarian activity. They occur with greater force and frequency during the preovulatory peak of estrogen production. This coordination of muscular contractions in the three different structures may also serve to orient properly the ovary with the infundibulum of the tube at the time of ovulation. Any pathologic condition interfering with the coordination or strength of contractions from the tubes may be an important cause for uterine dysrhythmia, inertia, or dysmenorrhea.