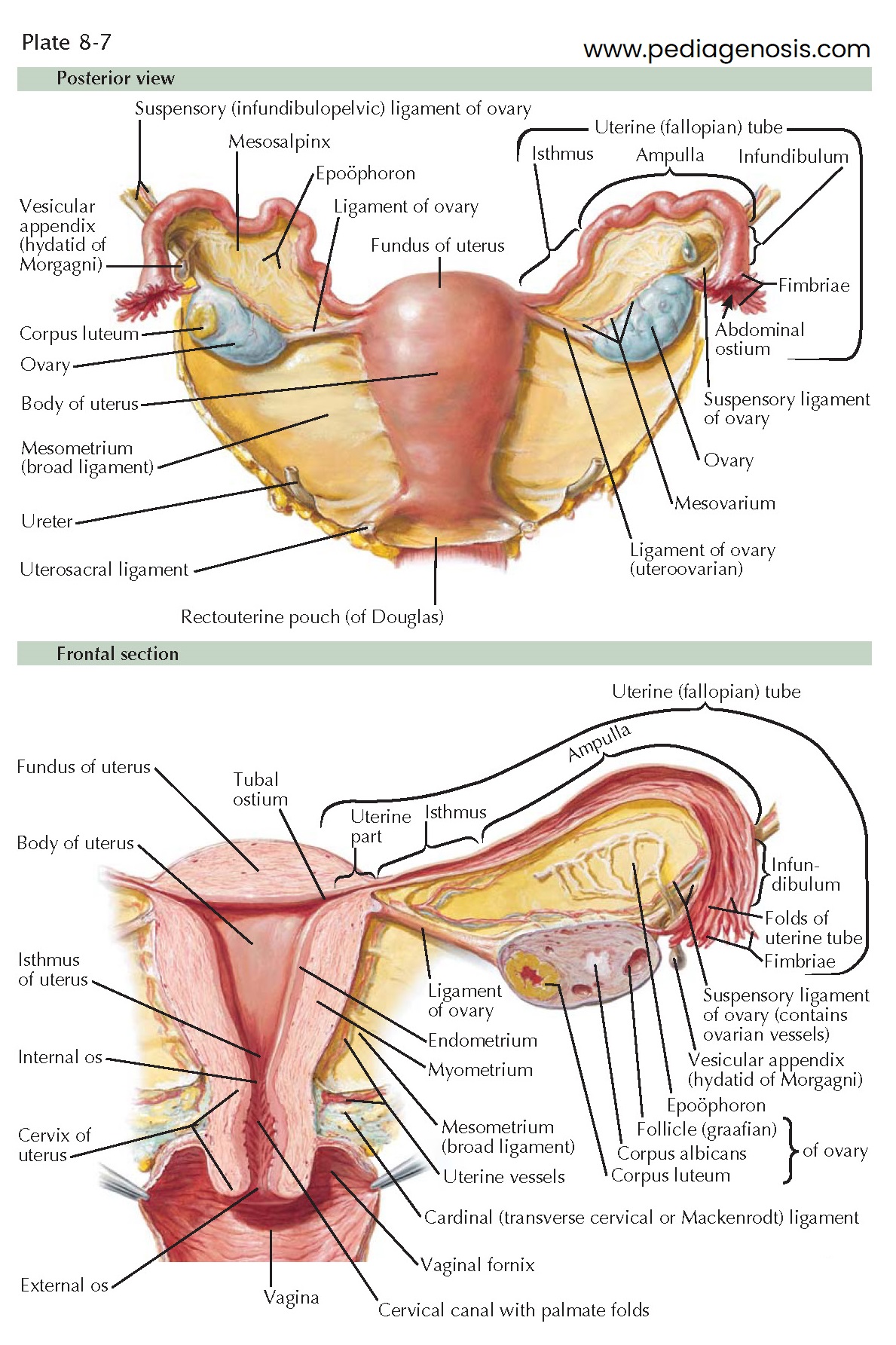 The uterus is a pear-shaped, thick-walled, hollow, muscular organ situated between the bladder and rectum. The fundus is the dome-shaped portion above the level of entrance of the fallopian tubes. The body, or corpus, lies below this and is separated from the cervix by a slight constriction, termed the isthmus. The cavity of the uterine body is a ﬂattened potential space, triangular in shape. The uterine tubes open into its basal angles. Its apex is continuous with the cervical canal at the internal os. The uterine wall is composed of an outer serosal layer (peritoneum); a ﬁrm, thick, intermediate coat of smooth muscle (myometrium); and an inner mucosal lining (endometrium).

The cervix is cylindric, slightly expanded in its middle, and about 2.5 cm in length. Its canal is spindle- shaped and opens into the vagina through the external os. On the anterior and posterior walls, the endocervical mucosa is raised in a series of palmate folds. The cervical wall is more ﬁbrous than that of the corpus. The oblique line of attachment of the vagina to the cervix divides the latter into supra-and infravaginal segments. About one-third of the anterior surface and one-half of the posterior surface of the cervix constitute the vaginal portion.

The peritoneum covers the fundus and corpus uteri on both its anterior and posterior aspects, reﬂecting at the cervicouterine junction to cover the vesicouterine excavation in front and the rectouterine excavation (cul-de-sac, pouch of Douglas) in back, from where it spreads over the bladder and rectum, respectively. At its lowest part, the peritoneum covers the cardinal ligament, which stretches laterally across the pelvic ﬂoor to the lateral pelvic walls.

The peritoneal layers that sheathe the fundus and uterine body unite on both sides of the uterus to form the broad ligament, which separates the vesicouterine and rectouterine pouches. The upper borders of the broad ligaments are folds of the peritoneum coming into existence when the anterior sheath turns to become the posterior sheath. These folds enclose the fallopian tubes. The broad ligaments expand downward from the lower edges of the tubes, assuming the function of a mesentery to the tubes, the mesosalpinx, in which the vessels to and from the tube take their course. In the mesosalpinx are also found the vestigial remnants of the mesonephric ducts.

The extreme lateral parts of the tube—the ﬁmbriated infundibulum and ampulla—are not enclosed by the broad ligament and open into the peritoneal cavity. However, the latter forms in this region a band, the infundibulopelvic ligament, which attaches the posterior surface of this end of the tube to the lateral wall of the pelvis. Another peritoneal fold, the suspensory ligament of the ovary, crosses the iliac vessels and runs medially to the free ends of the tubes. It contains the ovarian vessels and provides an attachment of the lateral pole of the ovary. This fold is not to be confused with the ligament of the ovary, a cord within the broad ligament running from the lateral angle of the uterus just below the uterine end of the tube downward to the lower or uterine margin of the ovary. The ovary is not wrapped by the broad ligament. Only its lateral surface lies upon the parietal pelvic peritoneum, where the external iliac vessels, the obliterated umbilical artery, and the ureter form a shallow depression called the ovarian fossa. The anterior border of the ovary is attached to the posterior layer of the broad ligament by a short fold through which the blood vessels pass to reach the hilum of the ovary. For this reason, the fold has been named the mesovarium.