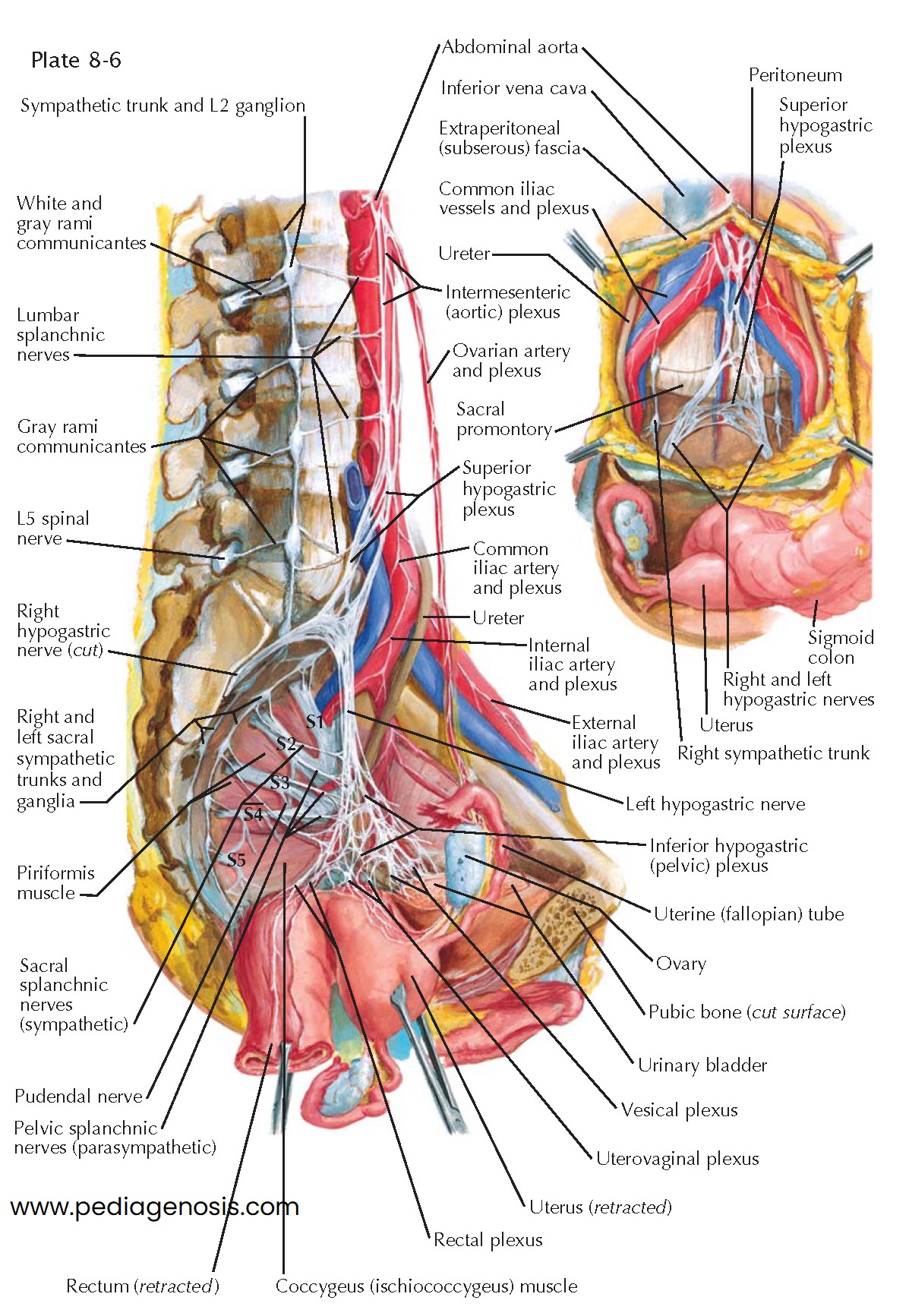 Although autonomic nerve ﬁbers enter the pelvis by several routes, the majority are contained in the superior hypogastric plexus, a caudal extension of the aortic and inferior mesenteric plexuses. From the inferior aspect of the celiac plexus at the level of the superior mesenteric artery, two or three intermesenteric nerves, connected by communicating branches, descend over the anterolateral surface of the aorta, receiving ﬁbers from the inferior mesenteric and lumbar sympathetic ganglia. At the bifurcation of the aorta, they join to form the superior hypogastric plexus or presacral nerve. The superior hypogastric plexus is found in the retro- peritoneal connective tissue. It extends from the fourth lumbar vertebra to the hollow over the sacrum. In its lower portion, the plexus divides to form the two hypo- gastric nerves that run laterally and inferiorly. These pass downward and laterally near the sacral end of each uterosacral ligament and then forward over the lateral aspect of the rectal ampulla and upper vagina. In this vicinity they are known as the pelvic plexuses. These nerves spread out to form the inferior hypogastric plexus in the area just below the bifurcation of the common iliac arteries. A middle hypogastric plexus, overlying and just below the sacral promontory, may sometimes be present.

Each pelvic plexus is composed of interlacing nerve ﬁbers and numerous minute ganglia, spread over an area of 2 or 3 cm2. They receive branches from the sacral ganglia of the sympathetic trunk and parasympathetic ﬁbers from the second, third, and fourth sacral spinal nerves (nervi erigentes or pelvic nerves). The pelvic plexus of nerves is subdivided into secondary plexuses, which follow the course of the visceral branches of the hypogastric vessels. These include the rectal plexus (to rectum), the uterovaginal plexus (to inner aspect of fallopian tubes, uterus, vagina, and erectile tissue of vestibular bulb), and the vesical plexus (to bladder).

The ovarian plexuses are composed of a meshwork of nerve ﬁbers, which arise from the aortic and renal plexuses and accompany the ovarian vessels to supply the ovaries, the outer aspect of the fallopian tubes, and the broad ligaments.

The anatomic relations of the presacral nerve, or superior hypogastric plexus, are of importance because its resection is sometimes performed for the relief of intractable pelvic pain. Beneath the peritoneum at the level of the bifurcation of the aorta, the superior hypogastric plexus will be found embedded in loose areolar tissue, overlying the middle sacral vessels and the bodies of the fourth and ﬁfth lumbar vertebrae. Usually, a broad, ﬂattened plexus, consisting of two or three incompletely fused trunks, is found. In 20% to 24% of cases, a single nerve is present. Fine nerve strands pass from the lumbar sympathetic ganglia beneath the common iliac vessels to the presacral nerve. The right ureter is visualized as it courses over the iliac vessels at the brim of the pelvis.