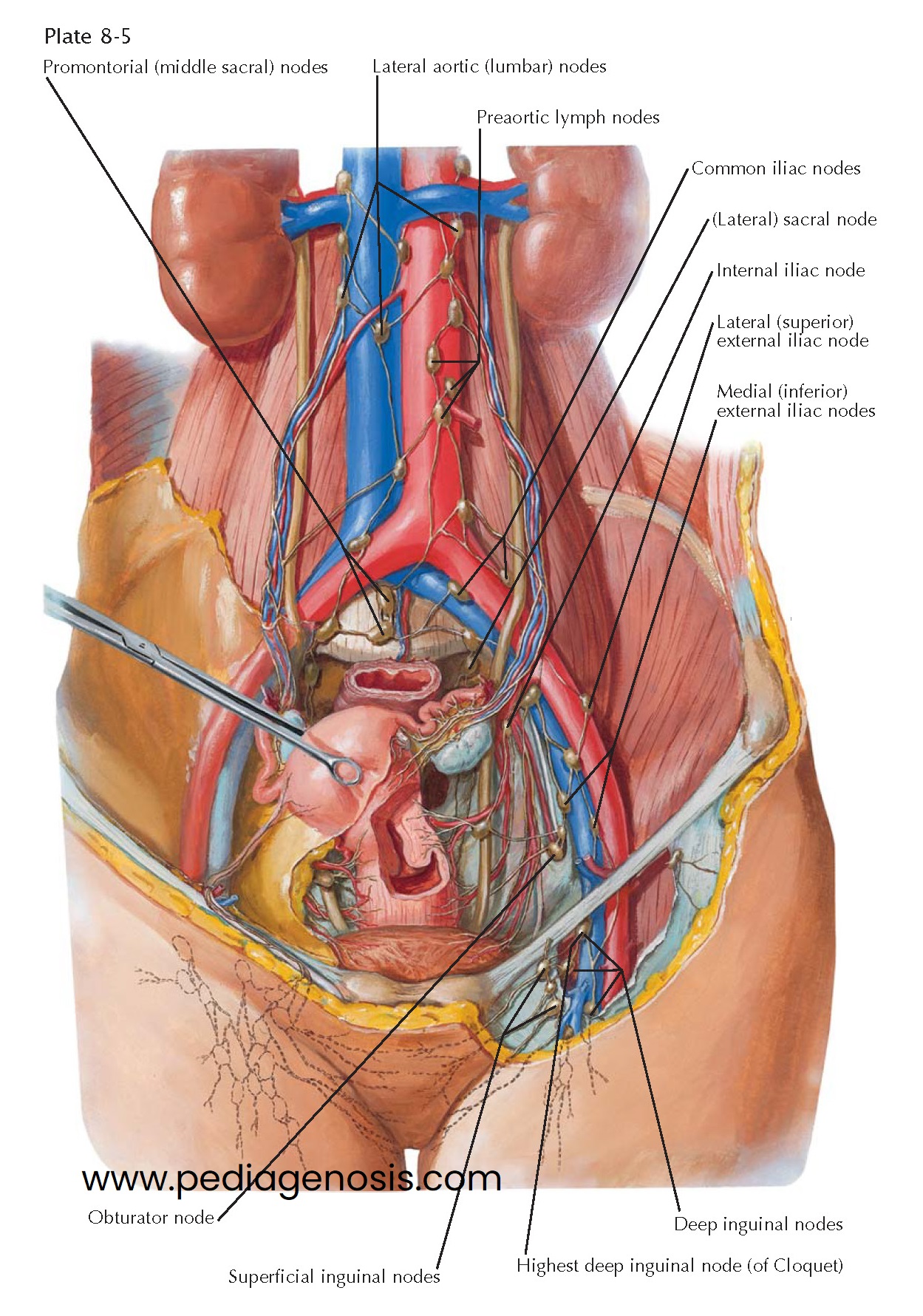 The lymphatics of the uterus are contained within three main networks or plexuses one at the base of the endometrium, another in the myometrium, and a third subperitoneally. No lymphatics, surprisingly, have been detected in the superﬁcial parts of the endometrium. The principal collecting trunks pass outward at the isthmus along the course of the uterine vessels. Drainage from the uterine body and from the cervix is similar, except that, in the region of the fundus, lymphatics are more likely to pass directly along with the ovarian lymphatics to the periaortic nodes. Occasionally, also, lymphatics may extend along the inguinal ligament to the femoral nodes. The number of lymph nodes in the group of parauterine nodes is small; most frequently there is a single node immediately lateral to each side of the cervix and adjacent to the pelvic course of the ureter. Although anatomists frequently do not comment about the parauterine nodes, the group receives special attention in radical surgical operations to treat uterine or cervical malignancy. Primary drainage to this node originates in the vagina, cervix, and uterus. Secondary drainage from this node is to the internal iliac nodes on the same side of the pelvis.

In lesions of the cervix, lymphatic drainage to the ureteral nodes, the lateral sacral nodes, and the nodes of the promontory may occur early. This drainage path allows for the evaluation of so-called sentinel nodes in cervical cancer patients. The premise of this is that if the sentinel node is free of disease, the chance that the remaining regional lymph nodes are also disease free is more than 95%. This technique identiﬁes the most likely ﬁrst site of nodal metastases in a regional lymph node basin. Sentinel lymph node biopsy can be performed laparoscopically or as part of an open procedure. Although pelvic lymphadenectomy remains the standard for patients with cervical cancer, the use of sentinel lymph node biopsy for these patients is increasing.

From the uterus as a whole, afferent lymphatics may extend to the ureteral, obturator, hypogastric, external and common iliac, periaortic, lateral and middle sacral and the femoral nodes. Occasionally, also, intercalated nodes may be involved between uterus and bladder or rectum. Although the afferent collecting lymphatics in the broad ligament are equipped with valves, the lymphatics of the uterus proper have none.

The ovarian lymphatics pass through the infundibulopelvic ligament along with the ovarian vessels to the lateral periaortic lymph nodes. On the left side, primary nodes may be situated between the left ovarian and left renal veins. On the right side, they may be found between the right renal vein and the inferior vena cava. Shorter lymphatic pathways may also lead to the hypogastric nodes.

The tubal lymphatic drainage is similar to that of the ovaries. In addition, afferents drain to the common iliac nodes and those of the sacral promontory. The sacral nodes are found over the middle of the sacrum in a space bounded laterally by the sacral foramina. These nodes receive lymphatic drainage from both the cervix and the vagina. Secondary drainage from these nodes runs in a cephalad direction to the subaortic nodes.

The lymphatics of the vagina share the lymphatic pathways of the cervix to the ureteral, hypogastric, obturator, external iliac, lateral sacral, and promontory nodes. Intercalated nodes between the vagina and bladder or vagina and rectum may also be present. The lowermost portion of the vagina, like the vulva, may drain to the femoral nodes.