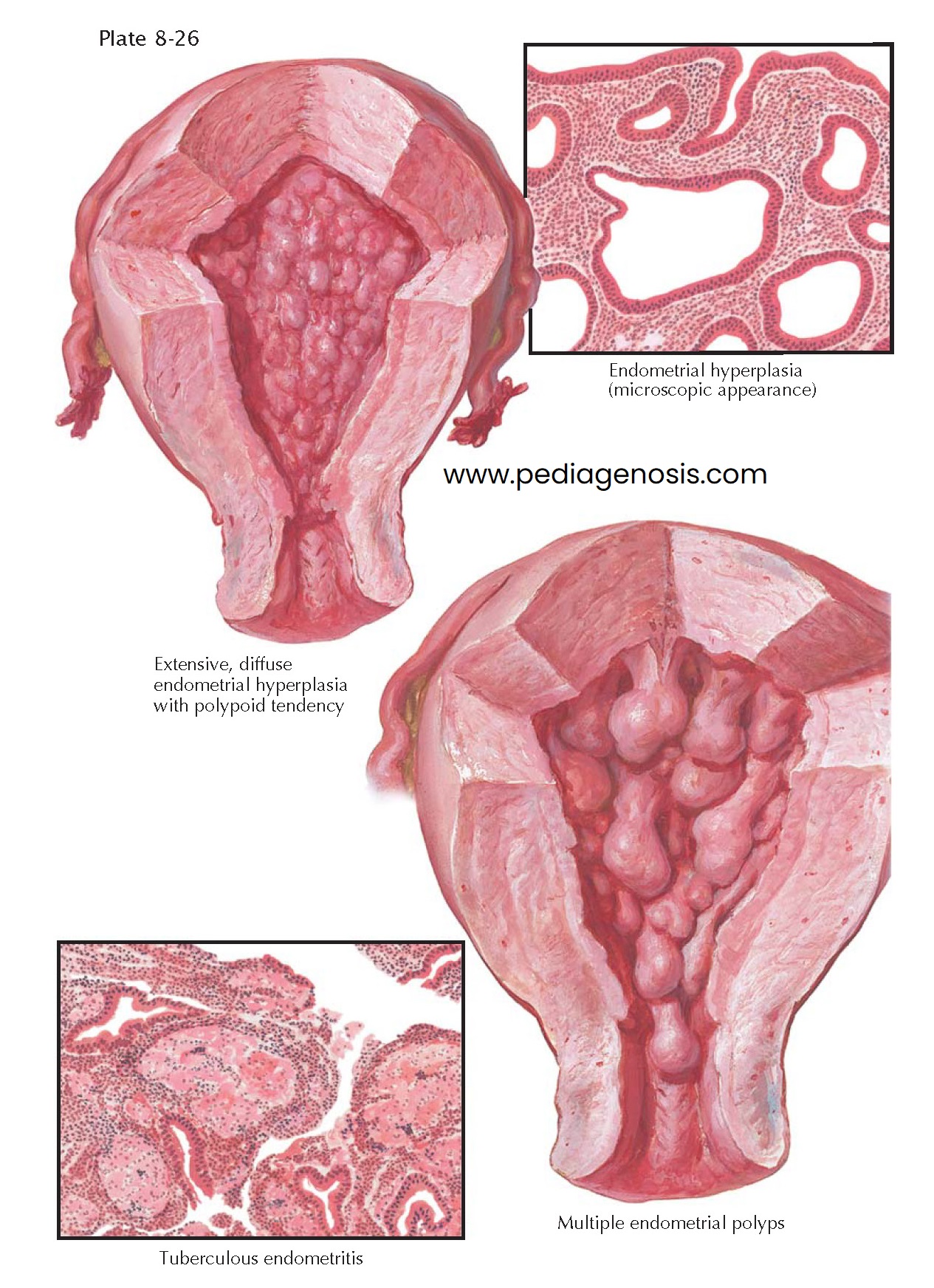 Under the prolonged inﬂuence of estrogen, the endometrial tissues become thickened and edematous. The characteristic microscopic changes of such endometrial hyperplasia are recognizable in the epithelial glands, the endometrial stroma, and the vascular architecture. The glands often show irregular cystic dilation and are lined with low cuboidal epithelium. In long-standing cases, the size of the glands and their lumina varies to a great extent. This causes a characteristic pattern of tissue and holes, which has been called “Swiss cheese” type. In other regions or cases, adenomatous buds or pockets with heaped-up epithelial lining may appear. The over-growth in both glands and stroma and the mitotic activity in the hyperplastic endometrium are explainable by persistent estrogen stimulation. The capillary network is prominent; venous lakes are evident and spiral arterioles are thick-walled and numerous. These adenomatous changes may, at times, be so extensive and may differ from the normal or hyperplastic endometrium by such enormous proliferation that it becomes difﬁcult, if not impossible, to exclude the presence of an early adenocarcinoma. When nuclear atypia is present, more than 40% of patients will have a coexisting endometrial cancer.

Of some practical importance is the attractive concept that endometrial hyperplasia may originate from a step-like progression of abnormal changes, starting with simple polyps and proceeding either coincidentally or sequentially with cystic hyperplasia, adenomatous hyperplasia, anaplasia, carcinoma in situ, and, ﬁnally, adenocarcinoma. Although no proof can be cited that even over a period of many years these pathologic changes will inevitably lead to a frank cancer, this theory constitutes a valid warning that these apparently benign conditions may not be wholly without serious consequences.

Macroscopically, one can observe little more than a diffuse swelling of the epithelial surface, which can sometimes be rather pale but is usually hyperemic. At times, isolated polyp-like efﬂorescences develop within the diffusely swollen endometrium; on other occasions, multiple polyps may be encountered, causing a rather uneven aspect to the entire surface. These ﬂeshy tumors arise as local overgrowths of endometrial glands and stroma and project beyond the surface of the endometrium. These are most common in the fundus of the uterus but may occur anywhere in the endometrial cavity. They are generally small (a few millimeters) but may enlarge to ﬁll the entire cavity. Polyp formation is common, being found in up to 10% of women (autopsy studies), and 20% of uteri removed for cancer. These polyps—single or multiple—develop after, as well as before, the menopause and may be the source of abnormal bleeding. Because they may develop during the course of normal ovulatory cycles and may even show varying degrees of secretory change, it is probable that at times these growths result from some local irritant or other factor in the endometrium itself, rather than from an endocrine abnormality. However, the etiology of diffuse, multiple polyps that may ﬁll the uterine cavity is probably the same as that of endometrial hyperplasia.

Tuberculous endometritis is frequently overlooked because it is uncommon in developed countries and it causes no clear-cut symptomatology, being diagnosed only by microscopic section. With the rise in virally mediated immunocompromise, the incidence is rising, making awareness of the possibility mandatory. Oligo-menorrhea, or scanty ﬂow, may not be an outstanding characteristic. It may be necessary to obtain ample endometrium by curettage to establish the diagnosis. The ﬁnding of characteristic centers of caseation in the endometrial stroma with giant cell formation is pathognomonic of the disease. In about half of the patients with genital tuberculosis, the uterus is involved, but, as a rule, this is secondary to a tuberculous infection of the tubes or pelvic peritoneum.