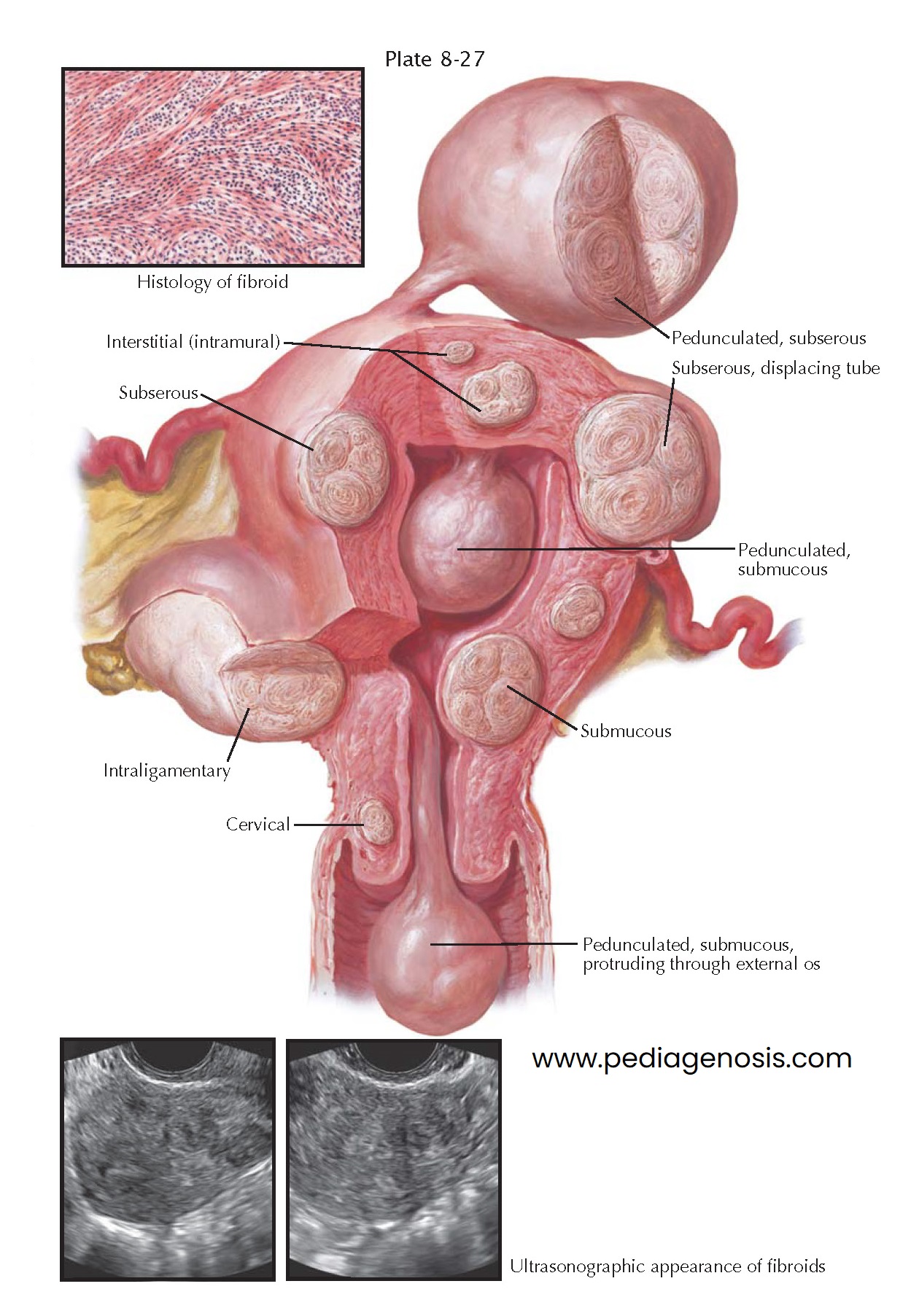 Uterine myomata are the most frequent tumors found in the female pelvis, with a reported incidence of from 4% to 11%. Fibroids are found in 30% of all women, and 40% to 50% of women older than 50 (one study has demonstrated a rate of more than 80% in African Americans older than 50). Leiomyomata account for approximately 30% of all hysterectomies. They are a benign connective tissue tumor found in or around the uterus, which may be disseminated in rare cases. They are commonly called “ﬁbroids,” although these tumors derive not from ﬁbrous tissue components but from vascular smooth muscle cells. From the point of view of the pathologist, the tumors under discussion should be classiﬁed as leiomyomata (from leios, meaning smooth).

Historically, it was thought that these ﬁbromuscular tumors were produced by some imbalance or excess of ovarian hormone secretion. In almost all instances they remain static or even shrink considerably in size after the menopause, implying that estrogen provides the stimulus for their growth. It is now thought that these tumors arise from a single smooth muscle cell (of vascular origin) resulting in tumors that are each mono-clonal. Estrogen, progesterone, and epidermal growth factor are all thought to stimulate growth. In general, ﬁbroids are multiple.

Leiomyomata generally arise within the interstitial substance of the uterine wall. As they expand, they may remain as intramural ﬁbroids, or they may progress toward either surface of the uterus to become subserous or submucous tumors. Seventy percent to 80% of uterine ﬁbroids are found within the wall of the uterus, with 5% to 10% lying below the endometrium and less than 5% arising in or near the cervix. Multiple ﬁbroids are found in up to 85% of patients. Growth is generally slow. However, it is progressive until the menopause, when production of estrogen ceases. Uterine ﬁbroids may be considered analogous to adenomata of the prostate; however, it is important to point out that malignancy frequently develops in the latter but appears very rarely in association with leiomyomata.

The most common symptom—that of profuse or prolonged bleeding—occurs in approximately 50% of reported cases. The tremendous variety in size, location, and position of these tumors brings out the importance of recognizing that in many cases the basic cause of the bleeding may not be the ﬁbroid itself. Obviously, in such instances removal of the tumor alone will not guarantee freedom from subsequent hemorrhages. Symptoms of pain and pressure are not common complaints, except in the presence of massive ﬁbroids; dysmenorrhea, menorrhagia, or intermenstrual bleeding occurs in 30% to 40% of patients. Pelvic examination is generally sufﬁcient to establish the diagnosis, although this may be augmented by ultrasonography, but is generally not required.

A ﬁbroid uterus is enlarged and irregular. The tumors have a rubbery, ﬁrm consistency and, when cut open, they show a typical whorled arrangement of tough, pinkish-white muscular bundles. The cut surface pouts outward owing to release of the constriction caused by the well-demarcated pseudocapsule. Leiomyomata do not have a capsule but are well circumscribed, which facilitates surgical removal. In microscopic section, myomata are dense and cellular, showing strands and bundles of characteristic spindle cells devoid of mitotic activity.

Fibroids may grow laterally into the broad ligament (intraligamentary). When large, they may grossly distort the anatomy of ureters and uterine vessels. Those that arise near the cornua may impinge upon the patency of the intramural portion of the fallopian tube. The blood supply of ﬁbroids that have become pedunculated is in constant jeopardy owing to the possibility of orsion of the pedicle, resulting in acute symptoms.