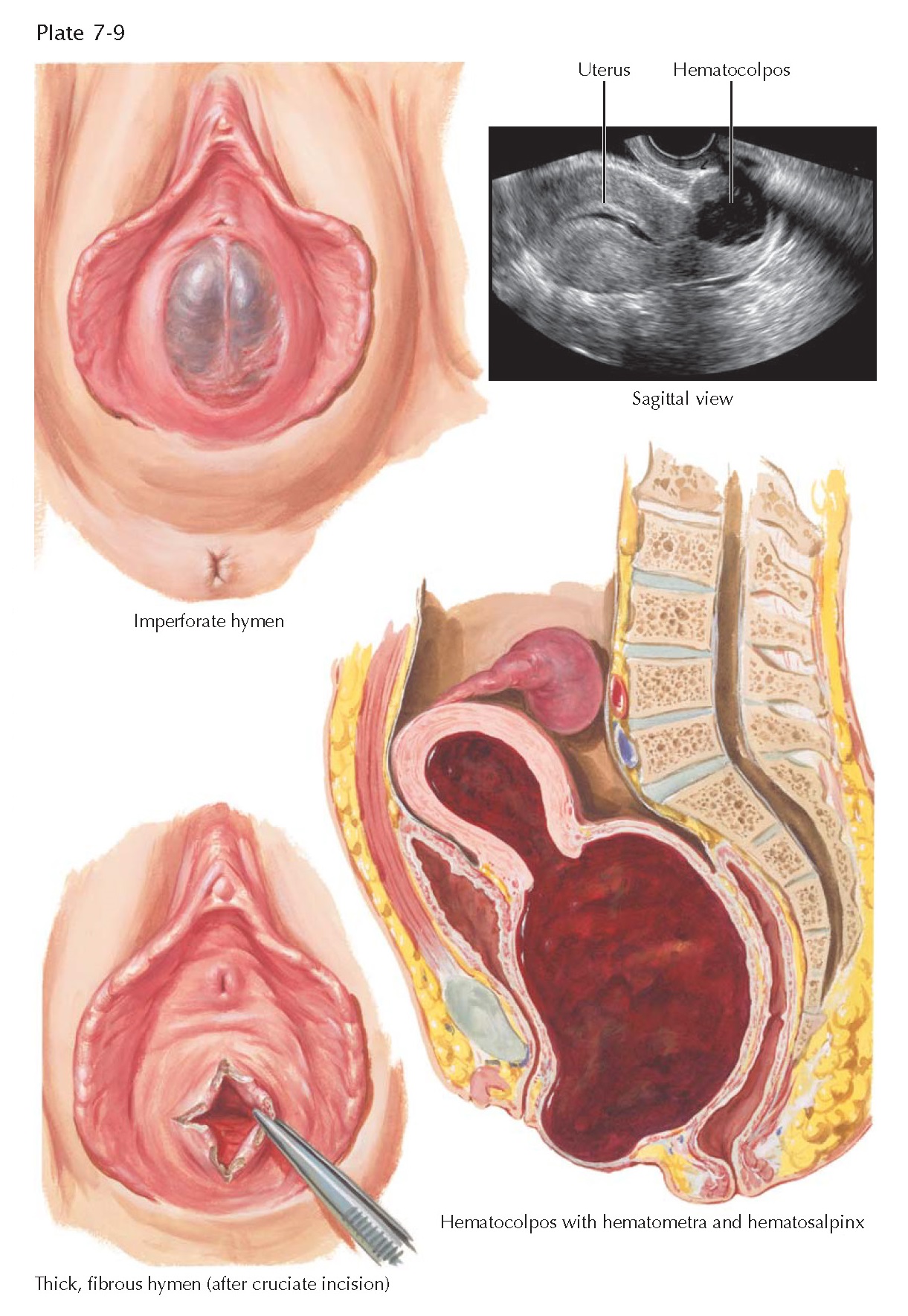 An imperforate hymen is the most commonly encountered anomaly resulting from abnormalities in the development or canalization of the müllerian ducts. It is caused by failure of the endoderm of the urogenital sinus and the epithelium of the vaginal vestibule to fuse and perforate during embryonic development. In addition to primary amenorrhea and coital dysfunction, an imperforate hymen may also be associated with endometriosis, vaginal adenosis, infertility, chronic pelvic pain, long-term sexual dysfunction, and hematocolpos. The hymen, located at the junction of the vagina and the vestibule, is the product of the combined embryo- logic fusion of the urogenital sinus and the müllerian ducts. As the urogenital sinus advances upward like a diverticulum from the outside, it envelops the column of müllerian cells, which has already moved nearly four-ﬁfths of the distance from the cervix down to the vestibule. The infoldings of the sinus at the point of union form the lateral walls of the hymen, but the posterior or dorsal portion is a composite of sinus cells externally and müllerian cells internally. The superﬁcial epithelium of the hymen, as of the vagina and cervical portio vaginalis, is derived entirely from the epithelium of the urogenital sinus, which pushes up the vaginal tube and undergoes differentiation into the stratiﬁed squamous layer. The opening of the vagina may occur independently of the formation of the hymen.

It is obvious that the complexity of this embryologic development may lead to congenital hymenal malformations. The imperforate hymen is usually detected at birth or puberty. At birth, a hydromucocolpos may accumulate under the inﬂuence of maternal hormones. Hence, at birth a bulging of the imperforate hymen may be noted between the labia, especially when there is an increase in intraabdominal pressure such as seen during crying. If there is a signiﬁcant hydromucocolpos detected by rectal examination in the newborn, then the hymen should be excised (cruciate incision followed by excision of margins) to allow continued drainage. During childhood, the imperforate hymen may be asymptomatic prior to puberty and may go unrecognized unless detected by careful physical examination. However, with the beginning of menstruation and the entrapment of menstrual ﬂow, the vagina gradually becomes distended with blood. From the pressure of retained blood within the vagina, the hymen bulges outward. As seen in the cross section, this situation may progress to the extreme, with the entire vagina engorged with old blood (hematocolpos), the uterus likewise enlarged by its own retained menstrual ﬂow (hematometra), and blood passing through the tubal isthmus to form a large hematosalpinx, which occasionally drains into the peritoneal cavity. Because of the possible impact on the upper genital tract, ultrasonography to evaluate the upper genital tract is often indicated. These patients may seek medical assistance because of primary amenorrhea, pelvic pain (especially cyclic), a pelvic mass, or occasionally urinary retention with large masses. Incision with excision of the margins of the hymen and release of the retained blood quickly relieves the situation. Occasionally, the atresia involves not only the hymen but also the lowermost portion of the vagina and, in these patients, a somewhat deeper dissection must be done before the hematoma can be evacuated.

A different form of external vaginal atresia is a thick, ﬁbrous, but not imperforate hymen, which can easily be incised to produce normal patency of the vaginal canal. This type of hymen, although much discussed by lay-persons and feared by the unmarried girl, is relatively uncommon. When it occurs, it may cause dyspareunia. Although properly considered an anomaly, this malformation, unlike those of the upper vagina, is usually not associated with congenital anomalies elsewhere in the genitourinary tract.