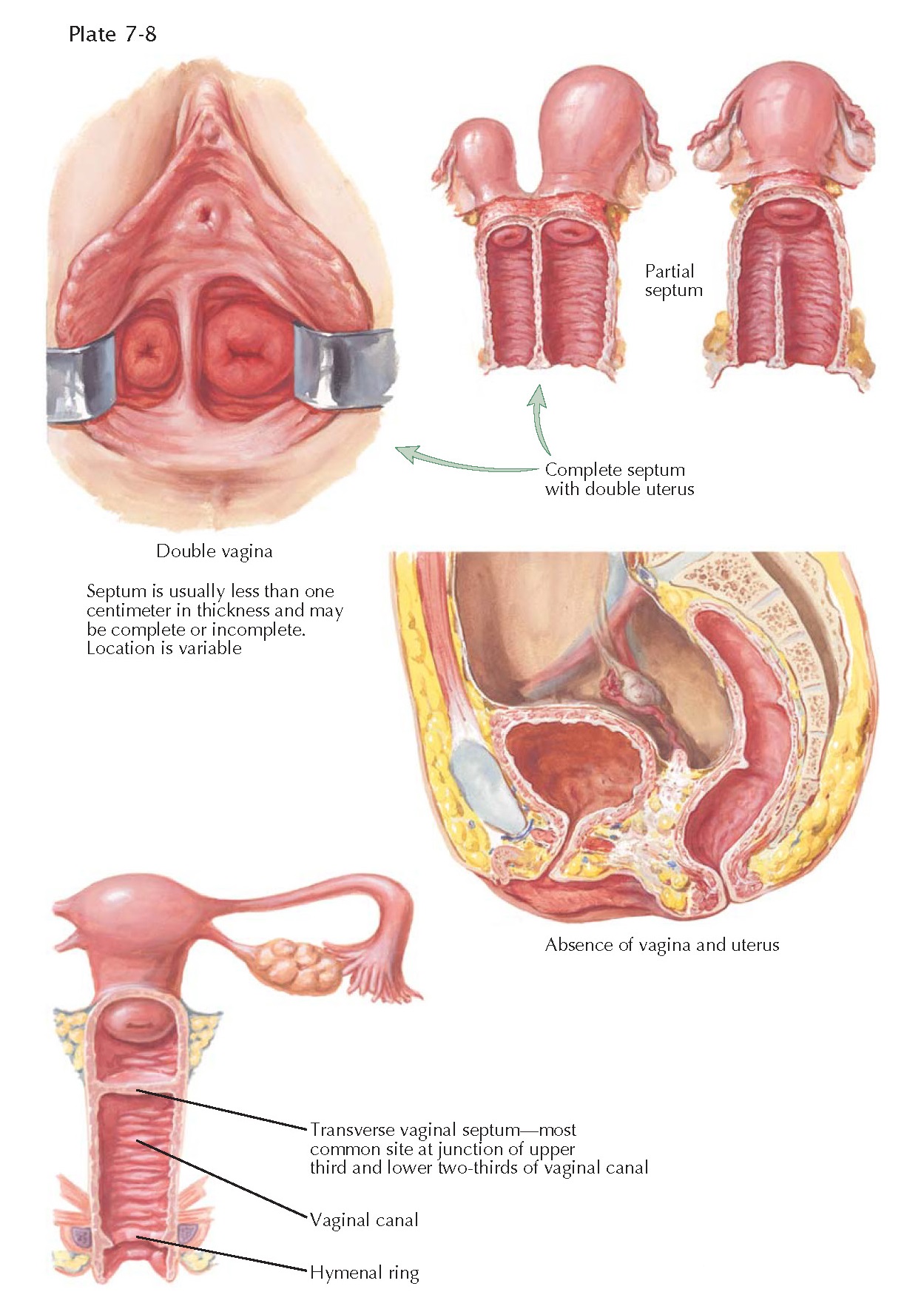 The müllerian ducts ﬁrst appear between the seventh and eighth weeks of embryonic life as invaginations of the coelomic epithelium overlying the genital folds. These ducts migrate caudally in the developing embryo, cross toward the midline, and fuse to form the anlage of the uterus, cervix, and upper three-quarters of the vagina. The unfused, cranial portions of the müllerian ducts develop into the fallopian tubes. The caudal fused column of cells moves further downward to join the urogenital sinus, which pushes in from the perineal surface. With the sloughing of the internal core of the cell column to form the vagina, the process is completed in 5 to 6 weeks, although full differentiation takes several weeks longer.

The majority of congenital anomalies of the uterus and vagina are caused by a failure of the müllerian ducts to fuse completely or to develop after fusion. The most extreme anomaly results from complete lack of union of the ducts as a result of inhibition in growth at a very early stage. (The HOX genes have been shown to play key roles in body patterning and organogenesis, and in particular during genital tract development.) The result of this failure of fusion in the adult is the complete absence of the uterus and vagina, but with a normal ovary (because it is derived from a different embryonic source). The fallopian tube may be well developed or rudimentary. The tube is connected near the midline to a small bulb of ﬁbrous tissue attached anteriorly to the bladder peritoneum and posteriorly to the peritoneum of the rectosigmoid. This bulb, which has its counterpart on the opposite side, represents the abortive attempt to form a uterus and may occasionally contain an endometrial lining. Because the vagina is absent, drainage of menstrual ﬂow is impossible, and blood is retained within the genital tract or must drain into the peritoneal cavity. The external genitalia and the vaginal vestibule are normally developed, distinguishing this condition from pseudohermaphroditism. Vaginal atresia is often unrecognized until the occurrence of amenorrhea after puberty or dyspareunia after marriage. Above the vestibular dimple, between bladder and rectum, a potential space ﬁlled with loose areolar connective tissue may be found, which can be opened surgically. The term Mayer-Rokitansky-Küster-Hauser syndrome is sometimes applied to these cases of vaginal atresia, usually with absent cervix and uterus.

A less extreme degree of failure in müllerian fusion leads to a double vagina. In such instances the ducts have fused incompletely and have progressed independently to maturity. In the perineal view, the longitudinal septum dividing the vaginal compartments extends outward from the vestibule separating the two cervices. A longitudinal section through the vagina shows the appearance of the same anomaly from above, each uterus having its own fallopian tube and ovary, and each theoretically fertile. The partial septate vagina is a milder degree of congenital malformation, which is caused by a failure of the core of solid müllerian epithelium to slough completely at its lowermost portion. The frequent occurrence of vaginal anomalies with other congenital malformations in the genitourinary tract results from their common embryonic heritage. The possibility of associated lesions in the upper urinary tracts should always be investigated.

Incomplete canalization of the müllerian tubercle and sinovaginal bulb can result in a transverse vaginal septum. These patients will have a normal-appearing introitus leading to a foreshortened blind vaginal pouch. After puberty, a large hematocolpos or hematometrium may result from this outﬂow obstruction. Partial septa have been reported in women exposed in utero to diethylstilbestrol (DES).