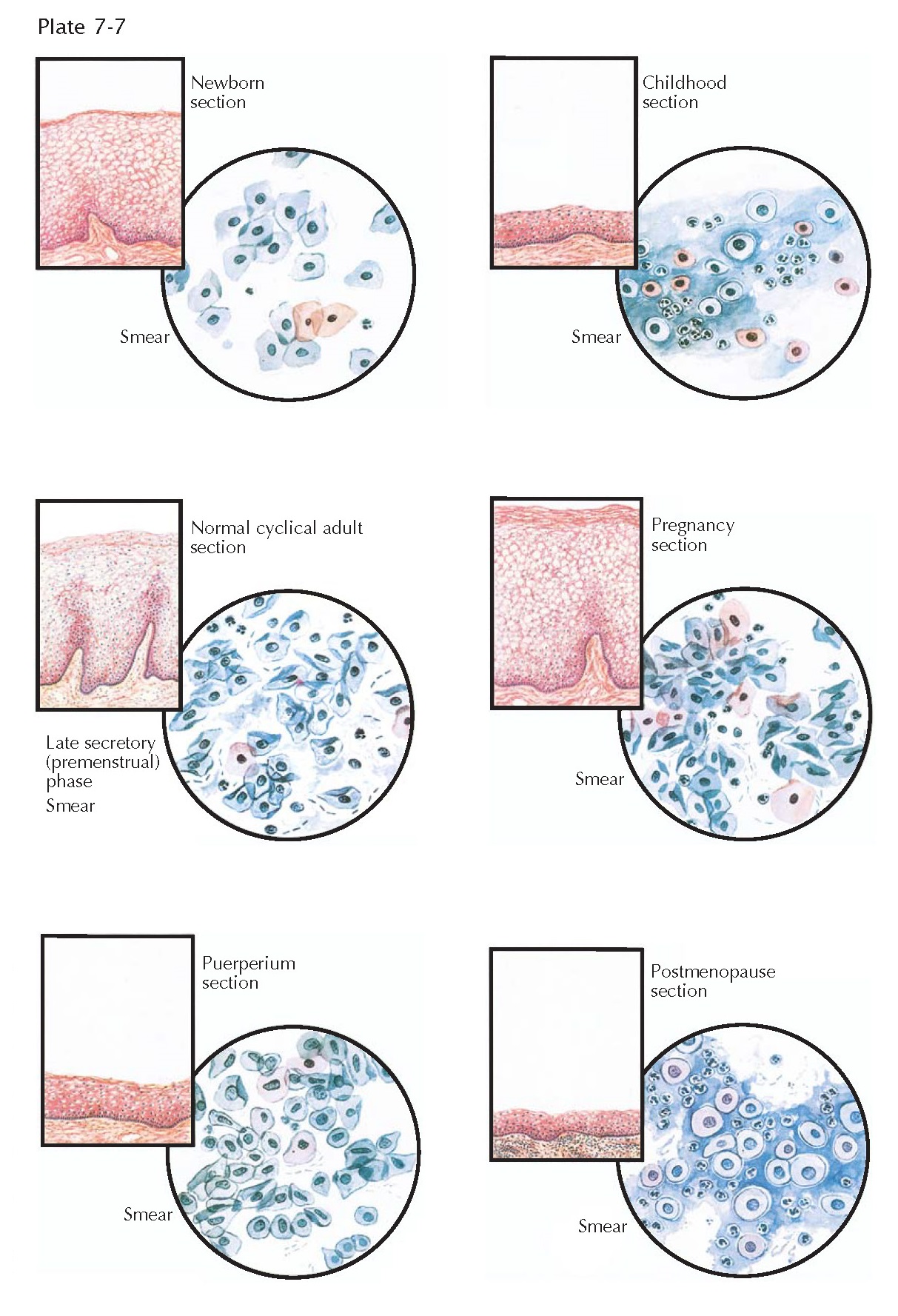 The superﬁcial cells of the vaginal epithelium are under the inﬂuence of ovarian hormones, changing in character over the course of a woman’s lifetime and the phases of the reproductive cycle. These variations are largely dependent upon the amount of circulating estrogen.

In the newborn, the vaginal epithelium is lush as a result of the transfer of maternal estrogen transmitted across the placenta. The precorniﬁed and corniﬁed cells shed from this epithelium are scattered but occasionally form loose clusters. A few polymorphonuclear leukocytes but few, if any, lactobacilli (Döderlein bacilli) are present. After delivery, circulating estrogen levels fall rapidly and the vaginal epithelium quickly transitions to that of childhood.

In childhood, when the circulating estrogen is at a low level, the vaginal epithelium is thin, fragile, and at risk for infection. The cytologic smear is composed chieﬂy of basal cells, with a background of mucus and polymorphonuclear leukocytes. The basal cells are round or oval, with vesicular nuclei and a large nuclear– cytoplasmic ratio. The cytoplasm is, with only a few exceptions, basophilic. This smear is typical of an atrophic condition and similar to that seen after menopause.

During the reproductive years, the vaginal epithelium thickens and undergoes cyclic change in response to the varying hormone levels of the menstrual cycle. In the past, these changes from more immature, basaloid cells early in the cycle to a predominance of mature precorniﬁed cells late in the cycle were used to help assess hormone levels and to provide indirect evidence of ovulation. Lactobacilli help to maintain an acidic environment, stabilizing the vaginal ﬂora and promoting corniﬁcation. A few white blood cells are normally present.

In pregnancy, as a result of the high levels of both estrogen and progesterone, the epithelium becomes a thick layer of superﬁcial cells with marked keratinization. Desquamation of superﬁcial precorniﬁed cells is associated with marked clumping and folding of the cells, which have elongated or oval vesicular nuclei. A few corniﬁed cells with pyknotic nuclei, polymorpho- nuclear leukocytes, lactobacilli, and free nuclei are present in varying numbers. Near the 12th week of pregnancy, a change in the vaginal smear occurs; fewer cells are shed, clumping and folding have lessened, pre- corniﬁed cells predominate, and the overall appearance is similar to that of a normal early proliferative phase. As pregnancy advances, the increased progesterone produces progressively smaller precorniﬁed cells, which are referred to as “navicular cells.”

In the puerperium, following the sudden drop of steroid hormones prior to recurrence of normal menstrual cycles, the vaginal epithelium is thin. The puerperal vaginal smear is characterized by the presence of a large number of basal cells, a few precorniﬁed and corniﬁed cells, and some inﬂammatory debris in the background, but not to the same extent as in smears from atrophic epithelium. With the return of normal ovarian cycling, the epithelium will again rebound to its normal prepregnancy thickness and character.

In the postmenopausal years, the vaginal epithelium is very thin, smooth, and relatively pale as a result of the cessation of ovarian function and the signiﬁcant decrease in estrogen levels. The absence of this protection leads to bacterial invasion and a resulting inﬂammatory reaction in the supporting layers, with a thin layer of edema beneath the basement membrane. The atrophic smear is characterized by almost 100% basal cells dispersed in a thick background of mucus. Numerous polymorphonuclear leukocytes and some lymphocytes are present, but when these occur in excessive numbers, they usually indicate the presence of clinical infection. Most of the cells are basophilic, but a few pink acidophils are found.