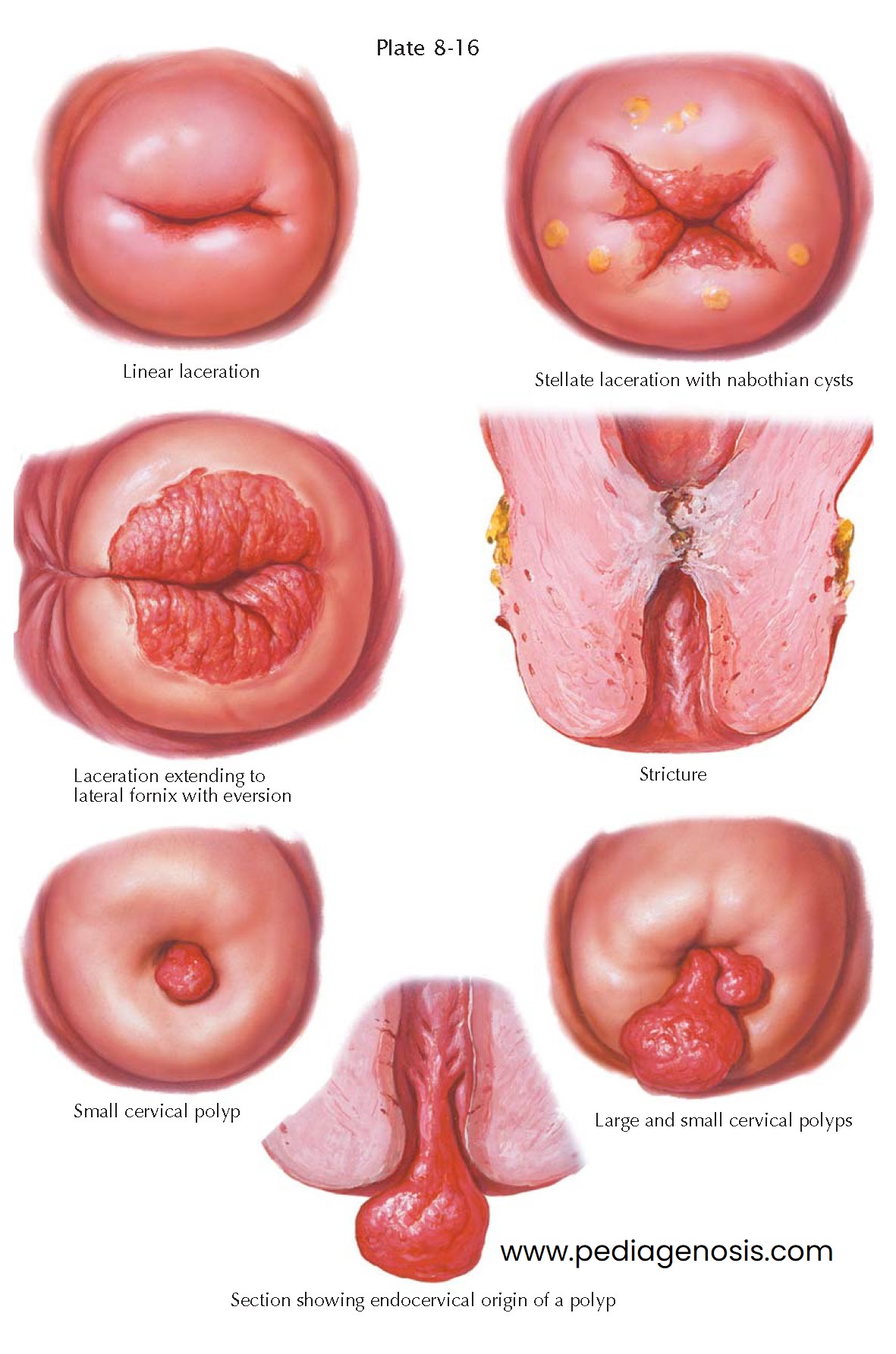 Parturition rarely fails to leave its mark on the external cervical os. Linear or horizontal lacerations are common, and if no infection occurs, they may heal satisfactorily without speciﬁc surgical or postpartum care. More complex lacerations penetrating deeply into the gland- bearing portion of endocervical stroma or extending into the lateral fornix permit eversion of the lining of the endocervical canal. Infection frequently, if not always, results from such severe lacerations unless it is treated promptly and effectively. Lacerations of the cervix may even extend into the lower uterine segment or the parametria. Such lacerations are uncommon in spontaneous deliveries.

Stricture of the internal cervical os is seen after post-traumatic or postinfectious cicatrization as well as in the rare cases of partial or complete congenital atresia. If obstruction at the internal or external os is complete or if a narrowing (stenosis) of the cervical canal is present, the menstrual ﬂow and endometrial debris are dammed up within the uterine cavity, producing hematometra. This type of stenosis is found after the application of radium to the cervix or uterine cavity. The presence of a large uterus distended with blood after the menopause should strongly suggest a diagnosis of carcinoma of the uterine body or cervix. During the childbearing age, of course, the possibility of a pregnant uterus must always be considered before exploring with an instrument an assumed stricture of the cervical canal.

The uterine mucosa may give rise to the formation of polyps. These are ﬂeshy tumors that arise as local overgrowths of endometrial glands and stroma and project beyond the surface of the endometrium. These are most common in the fundus of the uterus but may occur anywhere in the endometrial cavity. They are generally small (a few millimeters) but may enlarge to ﬁll the entire cavity. Endometrial and endocervical polyps have, etiologically and clinically, a quite different signiﬁcance. The etiology of cervical polyps remains unknown, although inﬂammation has been implicated. They arise from the mucous membrane of the cervix and histologically contain all the elements (columnar epithelium, ﬁbrous stroma and glands) of the endocervix. In the early stages, they cause no symptoms and remain undiagnosed, provided they are not detected by chance on the occasion of an examination prompted by other indications. As a rule, they are observed only when they extrude from the external os as soft, red, granular tabs, either single or multiple. Bleeding that is never profuse and often is only a slight staining or spot-ting induces the patient to call on the physician. The polyps tend to bleed readily on manipulation, particularly when the extruding parts of the polyp are ulcerated, which is frequently the case. The bleeding, when not caused by manipulation, is frequently, in character and extent, the same as that which may occur in cancer of the cervix, and it therefore is important not only that the polyps be removed completely at their bases to prevent recurrence but also that a careful histologic examination of the obtained specimen(s) be made by an experienced pathologist.

Cervical polyps may spring also from the vaginal surface of the cervix (not illustrated). These far less frequently encountered polyps are gray rather than red, much ﬁrmer, and, in some instances reach the size of several centimeters in diameter and pedicle length. These are often difﬁcult to distinguish from prolapsing ﬁbromas or uterine ﬁbroids (leiomyomata).

Although the polyps are, as a rule, benign tumors, it should be kept in mind that carcinoma originating in a polyp has been infrequently reported. In all cases, one may expect recurrences if the polyps are not wholly removed at the base of their pedicles.