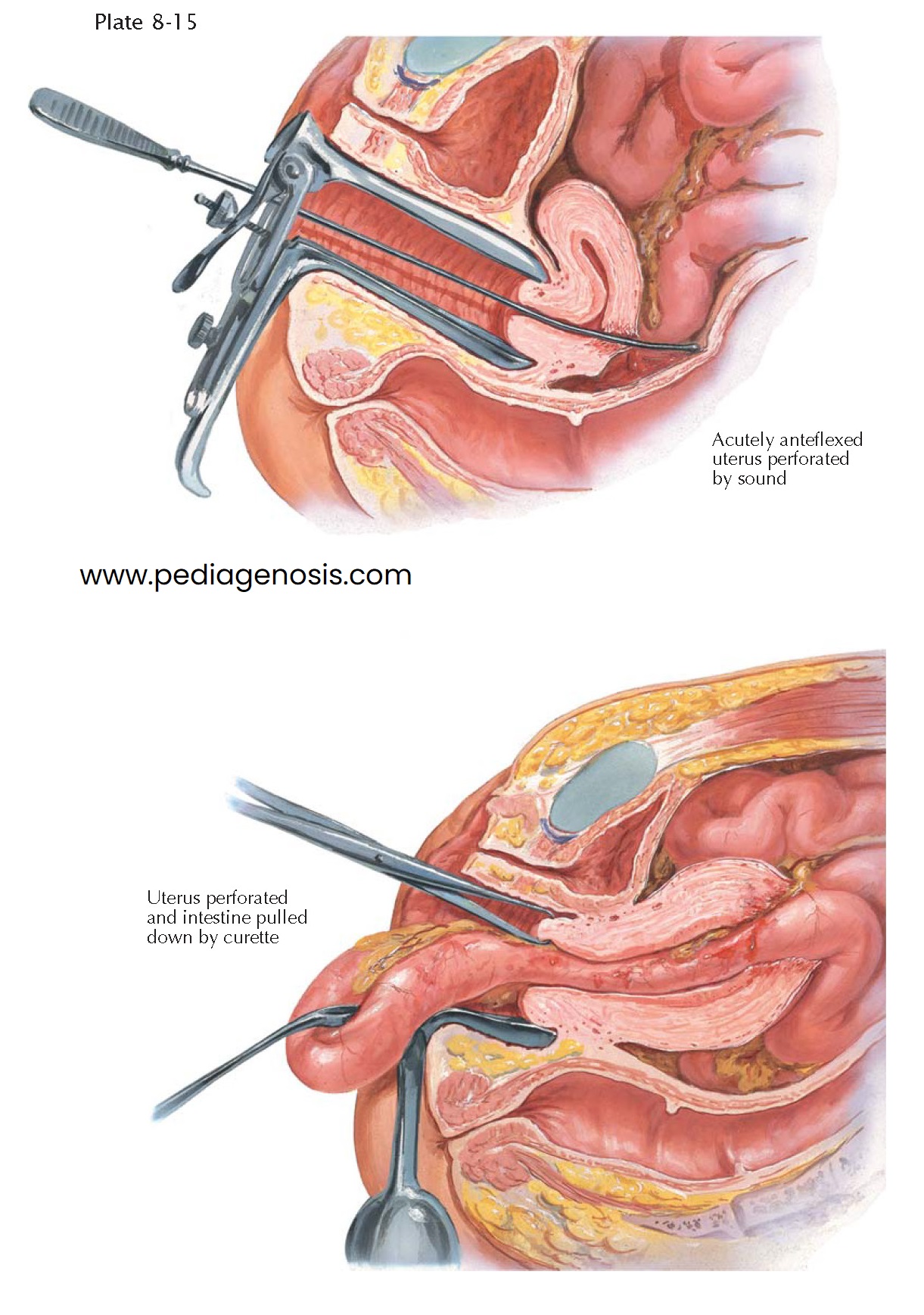 Spontaneous rupture of the uterus almost never occurs except during parturition. During pregnancy, rupture of the fundus has been reported to occur in women with a history of very high parity. Such instances, however, seem to be extremely rare (estimated to be 1 in 15,000 deliveries) and are generally associated with signiﬁcant uterine distension (polyhydramnios, multiple gestation). Rupture is found in 0.5% to 3.7% of patients with a previous cesarean delivery and 5% of patients for whom vaginal birth after cesarean delivery fails. Uterine rupture rates are higher in women with previous classic incisions and T-shaped incisions ranging between 4% and 9%. The frequency of a rupture of the uterine scar prior to labor is, of course, far lower than in labor. These occurrences should be distinguished from uterine scar dehiscence in which there is separation of an old scar that does not penetrate the uterine serosa or result in complications. Rupture may also occur following surgery on the body of the uterus, such as after myomectomy. Surgical scars have also been found to represent a site of diminished resistance in accidents, such as a fall, which occasionally may cause a rupture of the normally well-protected organ. It is notable that traumatic rupture of the bladder is a far more frequent event than that of the uterus. Roughly 7% of emergency cesarean hysterectomies are for uterine rupture. Surgical rupture of the corpus of the uterus results not infrequently from improper instrumentation of the uterus: passing a uterine sound performing a dilation and curettage or during a hysteroscopy. This can easily happen when a dilation and curettage is performed for incomplete abortion and when the uterine fundus is softened so it offers little resistance to the probing instrument. Perforation can also happen in the post-menopausal atrophic uterus with a thinned-out myometrium. The loss of intrinsic muscle tone after the climacteric allows the corpus to bend sharply forward at the isthmus in acute anteﬂexion as a result of intra-abdominal pressure. Bimanual examination may fail to detect the small fundus lying under the symphysis, and, in the mistaken impression that a second-degree retro-version is responsible for failure to feel the fundus, a straight uterine probe may be introduced. The end of the probe impinges promptly on the back wall of the canal. If this obstruction is wrongly interpreted as being due to stenosis at the internal os, added pressure may produce perforation through the posterior myometrium into the peritoneal cavity. When the uterus is in retroﬂexion, the anterior cervical wall offers a certain resistance to the dilating instrument, which, when forced, may enter the uterovesical pouch.

Perforation of the uterine fundus can result from aggressive handling of a curette or excessive force during curettage. Inexperienced operators have occasionally pulled out a loop of intestine through such a rent. If a sound slips up to its hilt with no force applied and no resistance being felt, one must assume that a rupture of the uterus has been produced. When a perforation is suspected it must be conﬁrmed and any damage may need to be assessed by laparoscopic inspection of the pelvic organs.

The softness of the cervical and uterine tissues must be kept in mind whenever abortion is induced, when the uterine contents must be removed instrumentally as with an incomplete abortion, or when curettage is performed on the recently pregnant uterus (retained products following delivery). To decrease this risk, an experienced surgeon should use the largest curette accommodated by the dilated cervix for the procedure. When in doubt, ultrasonographic guidance can provide additional safety.