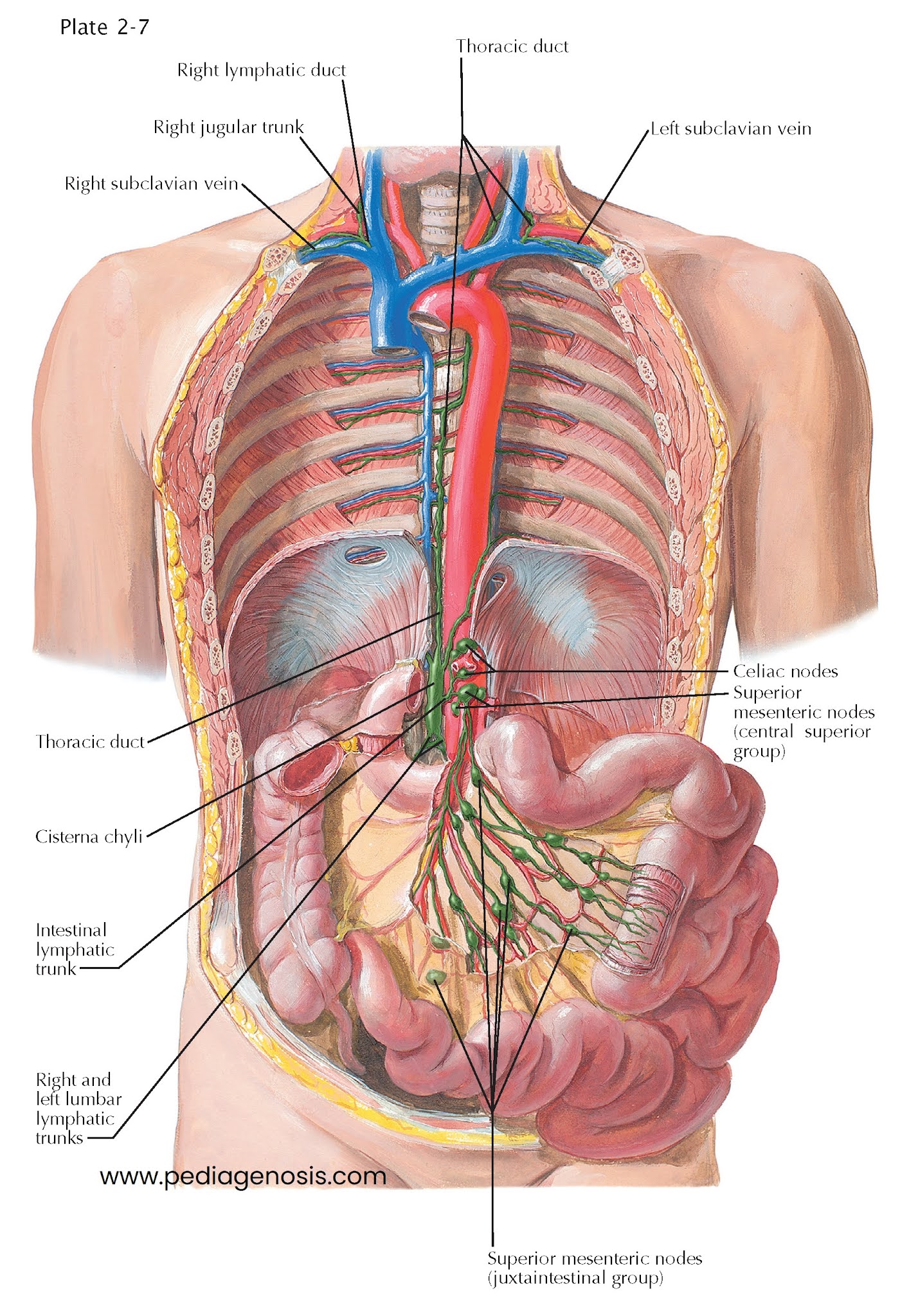 The lymph vessels of the small intestine begin with the central lacteals of the villi. At the base of the villi, each central lacteal joins with lymph capillaries, draining the nearby intestinal crypts. These lymph capillaries form a fine network within the lamina propria, in which the first lymphatic valves are already encountered. Many minute branches emerge from this network, penetrating through the muscularis mucosae into the submucosa, which hosts a sizable network of lymphatic vessels. The vessels of this network have conspicuous valves that prevent retrograde motion of the lymphatic fluid once it is inside the vessels. Progressively larger lymph vessels, receiving additional lymph from the layers of the muscularis mucosae and from the serosa and subserosa, pass toward the attachment of the mesentery to the small intestine. Within the mesentery, the lymph vessels travel alongside arteries and veins. These larger lymph vessels have been referred to as chyliferous vessels or lacteals because they transport emulsified fat absorbed from the intestines and appear as milky-white threads after the ingestion of fat-containing food. Lymph fluid traveling through these vessels encounters several juxtaintestinal (within the mesentery, alongside the intestines) superior mesenteric lymph nodes, which number some 100 to 200 and constitute the largest aggregate of lymph nodes in the body. They increase in number and size toward the root of the mesentery. In the root of the mesentery, larger lymphatic branches are situated, which lead into the central group of superior mesenteric nodes in the area where the superior mesenteric artery arises from the aorta.

The proximal duodenum and nearby pancreas receive blood from branches of the celiac trunk; its distal sections are supplied by the superior mesenteric artery; lymphatic drainage from the duodenum can pass to either celiac or superior mesenteric lymph nodes. Lymphatic fluid from the duodenum and the nearby pancreatic head pass fluid to lymph nodes lying inferior, superior, and posterior to the head of the pancreas. The inferior nodes are the already-encountered central group of superior mesenteric nodes. The superior group of lymph nodes is known as the subpyloric and right suprapancreatic nodes, and the posterior group is known as the retropancreatic nodes. Lymphatic fluid from the latter two groups of nodes drains parallel to branches of the celiac trunk to reach the celiac lymph nodes.

From the superior mesenteric nodes and the celiac nodes, lymphatic fluid passes through the short intestinal or gastrointestinal lymph trunk, which is sometimes divided into several smaller parallel trunks, and enters the cisterna chyli, a saclike expansion at the beginning of the thoracic duct. The intestinal trunk drains not only the whole of the small intestine but also all organs, the lymph of which is collected in the celiac and superior mesenteric lymph nodes (especially the stomach, liver, pancreas, and extensive portions of the large intestine).

The cisterna chyli also receives much of the lymphatic fluid drained from the lower limbs, pelvic organs, and hindgut organs. From the cisterna chyli, lymph drains superiorly through the thoracic duct. This large lymphatic vessel has prominent valves in its wall and is found in the posterior mediastinum between the aorta and esophagus. It travels posterior to the arch of the aorta to ultimately drain the lymphatic fluid into the venous system at the left subclavian vein near its junction with the left internal jugular vein.