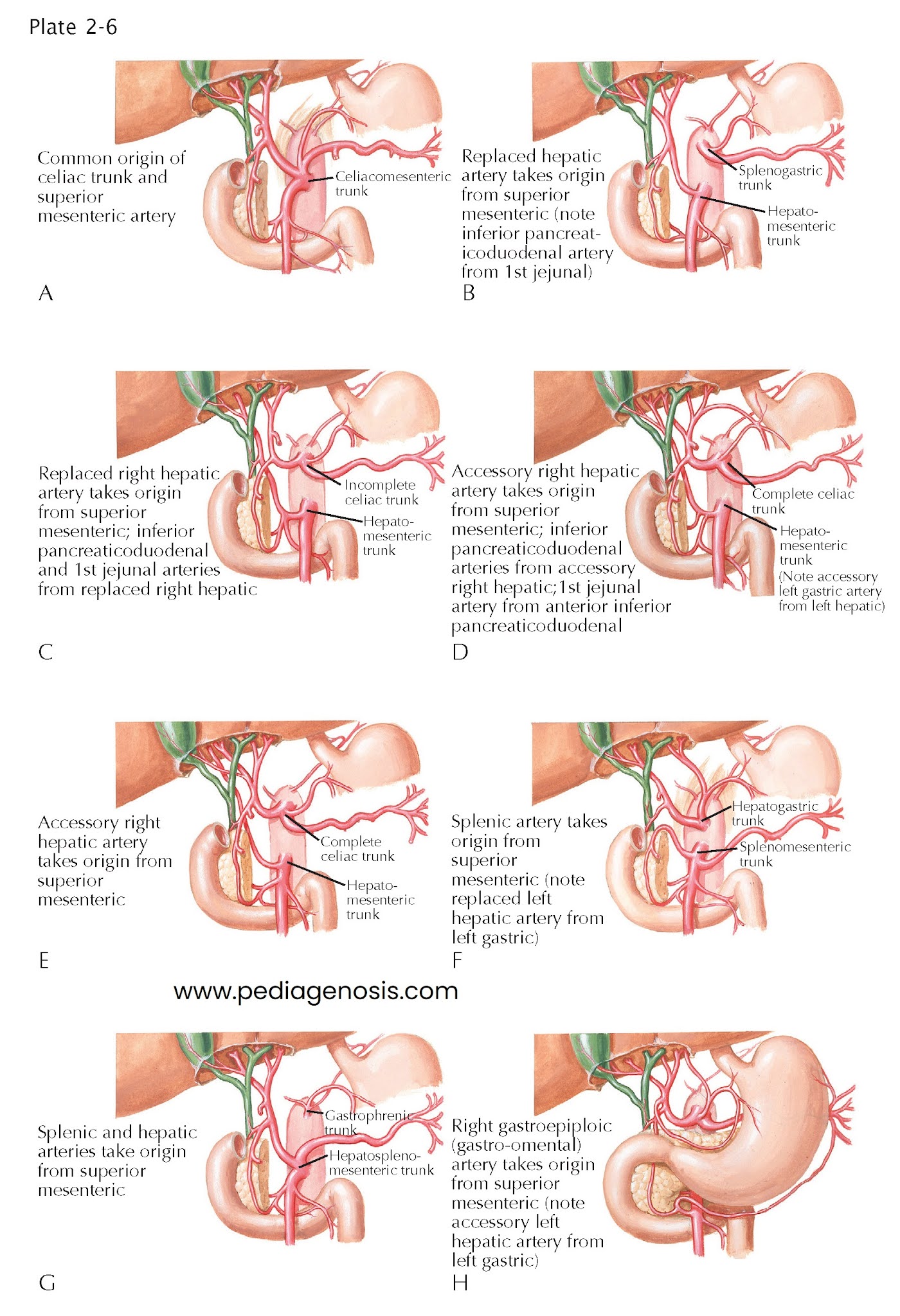 For the typical pattern of arterial branching of the small intestines, please refer to Plates 1-1 and 1-2. In this section, we will describe the variations concerning the origin, course, anastomoses, and distribution of the vessels supplying the small intestine. These variations are so frequent that conventional textbook descriptions are inadequate for anyone attempting procedures in the area. Typically, the superior mesenteric artery supplies almost all of the small intestine aside from the proximal duodenum, which receives blood from the supraduodenal and superior pancreaticoduodenal arteries. These arteries are branches of the gastroduodenal artery, a branch of the common hepatic artery, which is itself a branch of the celiac trunk.

Variations that are even less frequent have been described. A splenomesenteric trunk develops when the superior mesenteric and splenic arteries arise from a common trunk (F). In such cases, there will be a separate hepatogastric trunk branching into common hepatic and left gastric arteries. If the superior mesenteric, splenic, and common hepatic arteries come from a common trunk of the abdominal aorta (G), the result is a hepatosplenomesenteric trunk, with a separate left gastric artery arising from the aorta or from the left inferior phrenic artery, creating a gastrophrenic trunk. Occasion- ally, the right gastroomental artery may branch from the superior mesenteric artery (H) instead of taking its normal departure from the gastroduodenal artery.

The first jejunal branch of superior mesenteric origin may be very large (6 mm in diameter), but in many instances, it is very small (1 to 2 mm) and forms anastomoses with the inferior pancreaticoduodenal artery or has a common origin with it. The distribution, as well as the caliber, of all the following intestinal branches of the superior mesenteric artery varies considerably, and smaller branches may alternate without any general rule or order. An odd situation may be faced during gastric resection, when the right gastroomental artery and the first jejunal branch arise from a common pancreaticoduodenal trunk coming from the superior mesenteric artery. Closer to the small intestine itself, small (4- to 6-cm) segments may be vascularized by straight arteries derived from a separate anterior and posterior arcade, each serving the anterior and posterior surface of the same region of the gut. Though numerous other examples of variations concerning the origin and communication of the first jejunal branches could be enumerated, those cited seem sufficient to justify the requirement of a careful inspection of these vessels while operating in this region.