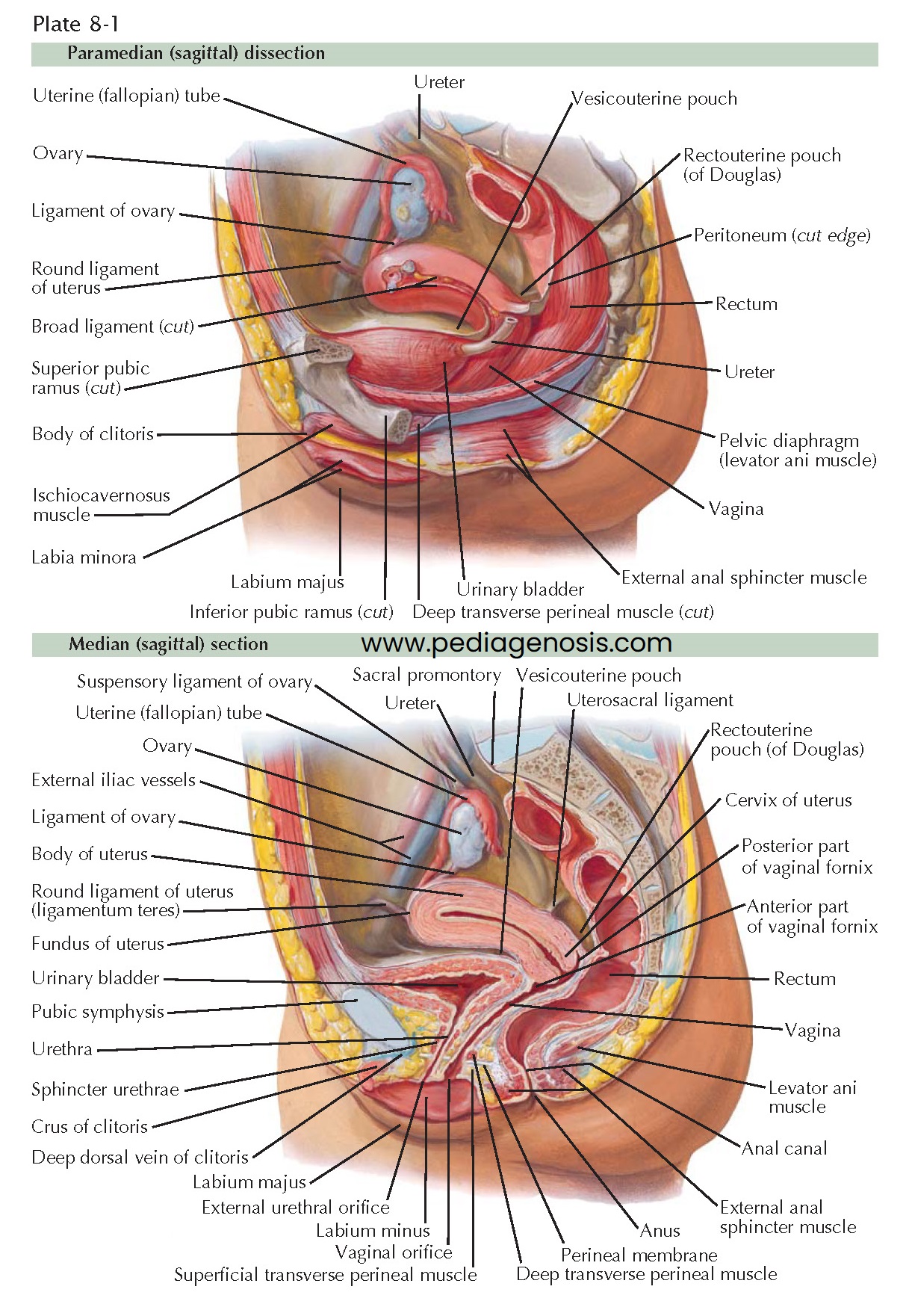 The interrelationships between the uterus and the surrounding muscles, nerves, vessels, and organs determine both the pathophysiology of uterine function and dysfunction in addition to the therapeutic modalities available when pathologies exist. The viscera contained within the female pelvis minor include the pelvic colon, urinary bladder and urethra, uterus, uterine tubes, ovaries, and vagina. As with the pictures illustrating the structures of the male pelvis, the topography of the female pelvis is demonstrated in two sections.

The pelvic colon is surrounded by peritoneum and attached by its mesocolon to the medial border of the left psoas muscle and the sacrum, down to the third sacral vertebra. Its greater part lies in a horizontal plane, though it may occupy many positions, including the superior surface and posterior aspect of the uterus. The rectum extends from the third sacral vertebra to just beyond the tip of the coccyx. It is covered by peritoneum in front and at the sides in its upper third and in front only in its middle third; its lower third is devoid of peritoneum. During pregnancy, this close apposition between the uterus and rectosigmoid often contributes to or worsens the impact of constipation.

The ureter enters the true pelvis by crossing in front of the bifurcation of the common iliac artery and descends to the pelvic ﬂoor on the lateral pelvic wall. At the level of the ischial spine, it runs forward and medially, beneath the broad ligament, between the uterine and vaginal arteries to the lateral vaginal fornix. At this point it is approximately 2 cm lateral to the cervix, a point of potential injury during hysterectomy. The ureter then ascends in front of the vagina for a short distance to reach the base of the bladder, where it opens into the lateral angle of the trigone by piercing the bladder wall obliquely.

The urinary bladder lies behind the symphysis, in front of the uterus and the vagina. Its base is in direct contact with the anterior vaginal wall. The neck of the bladder lies on the superior surface of the urogenital diaphragm and is continuous with the urethra. The superior surface is covered by peritoneum and is in contact with the body and fundus of the anteﬂexed uterus. It is this reﬂection that must be mobilized during the course of cesarean delivery. The space of Retzius lies between the pubis and the bladder and is ﬁlled with extraperitoneal adipose tissue.

The topographic relationships of the uterus are observed in the cross sections as depicted on this page. The superior surface of the uterus is convex and generally directed forward. The anterior surface is ﬂat and looks downward and forward, resting on the bladder. Its peritoneal covering is reﬂected at the level of the isthmus to the upper aspect of the bladder, creating the vesicouterine pouch. The posterior surface of the uterus is convex and lies in relation to the pelvic colon and rectum. The peritoneum of the posterior wall covers the body and upper cervix and then extends over the posterior fornix of the vagina to the rectum, to form the rectouterine pouch or cul-de-sac of Douglas. Later- ally, the visceral peritoneum becomes the anterior and posterior leaves of the broad ligament.

The cervix is directed downward and backward to rest against the posterior vaginal wall. Only the upper half of its posterior surface is covered by peritoneum. The external os of the cervix lies at about the level of the upper border of the symphysis pubis in the plane of the ischial spine.