PELVIC VISCERA AND SUPPORT—FROM ABOVE

PELVIC VISCERA AND SUPPORT—FROM ABOVE 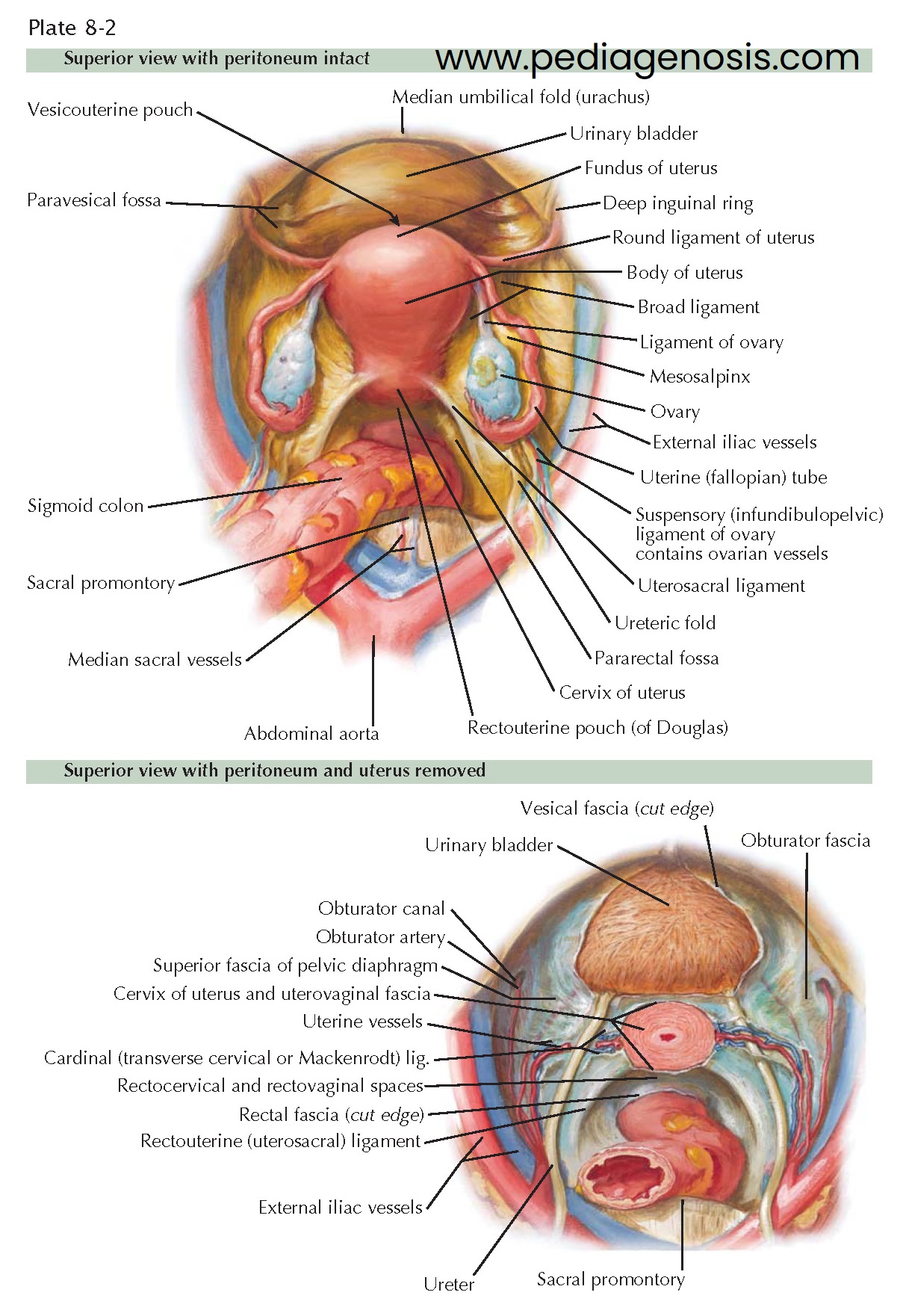 Although the muscular hammock of the levator plate provides the caudal (inferior) ﬂoor for the pelvic viscera, the organs of the pelvis have their own mechanisms of support. When either or both of these two support systems fail, this failure can result in clinical dysfunction. Understanding these supports can not only explain pathologies when present but also the therapeutic strategies that may be applied in their correction.

The term endopelvic fascia (actually a pseudofascia) refers to the reﬂections of the superior fascia of the pelvic diaphragm upon the pelvic viscera. At the points where these hollow organs pierce the pelvic ﬂoor, tubular ﬁbrous investments are carried upward from the superior fascia as tightly ﬁtting collars, which blend with and may even become inseparable from their outer muscle coat. Thus, three tubes of fascia are present, encasing, respectively, the urethra and bladder, the vagina, and the lower uterus and the rectum. These fascial envelopes, with interwoven muscle ﬁbers, are utilized in the repair of cystoceles and rectoceles anteriorly and posteriorly. It is also within this ﬁbrous tube investing the lower uterine segment that the so-called intrafascial hysterectomy is performed in an effort to protect the support of the remaining vaginal cuff. The vesical, uterine, and rectal layers of endopelvic fascia are continuous with the superior fascia of the pelvic diaphragm, the obturator fascia, the iliac fascia, and the transversalis fascia.

Uterine support is maintained directly and indirectly by a number of peritoneal, ligamentous, ﬁbrous, and ﬁbromuscular structures. Of these, the most important are the cardinal ligaments and the pelvic diaphragm with its endopelvic fascial extensions. The vesicouterine peritoneal reﬂection is sometimes referred to as the anterior ligament of the uterus, and the rectouterine peritoneal reﬂection as the posterior ligament. These are not true ligaments and they provide only limited additional support. The round ligaments are ﬂattened bands of ﬁbromuscular tissue invested with visceral peritoneum that extend from the angles of the uterus downward, laterally, and forward, through the inguinal canal to terminate in the labia majora.

The sacrouterine (uterosacral) ligaments are true ligaments of musculofascial consistency that run from the upper part of the cervix to the sides of the sacrum. At the uterine end, they merge with the adjacent posterior aspect of the cardinal ligaments and the endopelvic fascial tube. The broad ligaments consist of winglike double folds of peritoneum reﬂected from the lateral walls of the uterus to the lateral pelvic walls. Their superior margins encase the uterine tube and round ligaments. They then continue as the infundibulopelvic ligaments as they progress laterally and superiorly. Inferiorly, the ensheathed uterine vessels and cardinal ligaments may be felt. Within the two peritoneal layers are to be found loose areolar tissue and fat, the fallopian tube, the round ligament, the ovarian ligament, the parametrium, the epoöphoron, paroöphoron and Gartner duct, the uterine and ovarian vessels, lymphatics, and nerves.

The cardinal or transverse cervical ligaments (of Mackenrodt) are composed of condensed ﬁbrous tissue and some smooth muscle ﬁbers. They extend from the lateral aspect of the uterine isthmus in tentlike fashion toward the pelvic wall, to become inserted, fan-shaped, into the obturator and superior fasciae of the pelvic diaphragm. This triangular septum of heavy ﬁbrous tissue includes the thick connective tissue sheath, which invests the uterine vessels. Mesially and inferiorly, the cardinal ligaments merge with the uterovaginal and vesical endopelvic fascial envelopes. Posteriorly, they are integrated with the uterosacral ligaments.