With the exception of the ovarian, superior hemorrhoidal, and middle sacral arteries, the hypogastric divisions of the common iliac arteries supply the pelvic viscera. 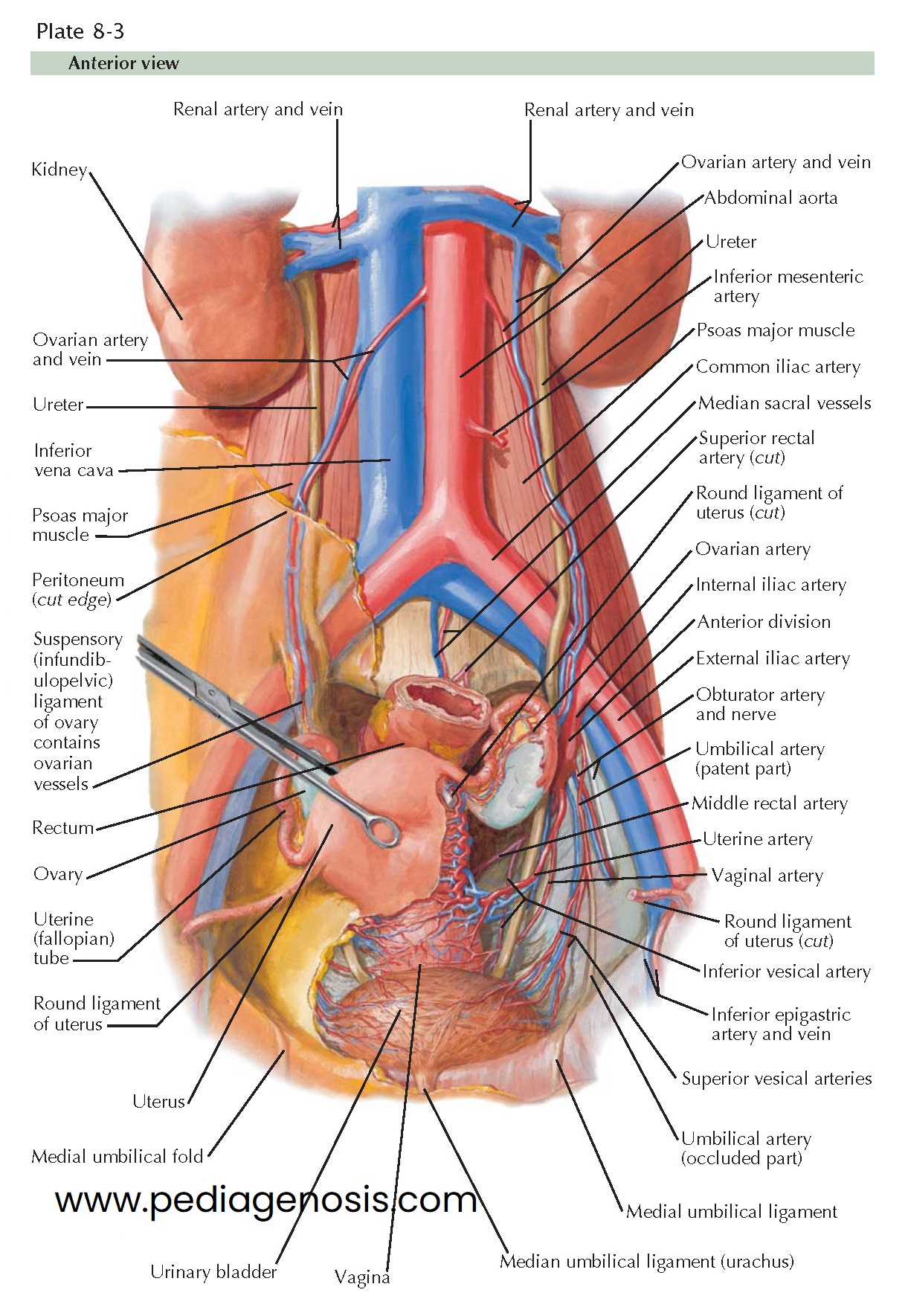 The ovarian arteries arise from the aorta just below the origin of the renal vessels, at the same level at which the internal spermatic artery departs from the aorta in the male. The ovarian arteries course obliquely downward and laterally over the psoas major muscle and the ureter. They enter the true pelvis by crossing the common iliac artery just before its bifurcation. The ovarian artery enters the broad ligament at the junction of its superior and lateral borders. Continuing beneath the fallopian tube, it enters the mesovarium to supply the ovary. In addition to broad anastomoses with the ovarian rami of the uterine arteries, branches extend to the ampullar and isthmic portions of the tube, the ureter, and the round ligament.

The middle sacral artery is embryologically the continuation of the aorta, which, owing to the strong development of the two common iliac arteries, has become a very thin vessel. It passes in the midline downward over the anterior surface of the fourth and ﬁfth lumbar vertebrae, the sacrum and the coccyx, and terminates in the glomus coccygeum, after giving off lumbar, lateral, sacral, and rectal branches, which anastomose with branches of the iliolumbar artery and supply muscular and bony structures of the posterior pelvic wall.

The external iliac artery is the larger of the two subdivisions of the common iliac. It extends downward along the superior border of the true pelvis to the lower margin of the inguinal ligament. It lies upon the medial border of the psoas major muscle. Midway between the symphysis pubis and the anterior superior iliac spine, it enters the thigh as the femoral artery.

The uterine artery arises from the anterior division of the hypogastric artery close to, or in common with, the middle hemorrhoidal or vaginal artery. It courses slightly forward and medialward on the superior fascia of the levatorani muscle to the lower margin of the broad ligament. The uterine artery, after entering the broad ligament, is surrounded in the parametrium by the uterine veins and a condensed sheath of connective tissue. It arches over the ureter about 2 cm lateral to the cervix. This topographic relationship is of extreme surgical importance. At the level of the isthmus, it gives off a descending cervical branch, which surrounds the cervix and anastomoses with branches of the vaginal artery. The main uterine vessels follow a tortuous course upward along the lateral margin of the uterus, giving off spiral branches to the anterior and posterior surfaces of the uterus. The uterine artery terminates in a tubal branch within the mesosalpinx, and an ovarian ramus, which anastomoses with the ovarian artery in the mesovarium.