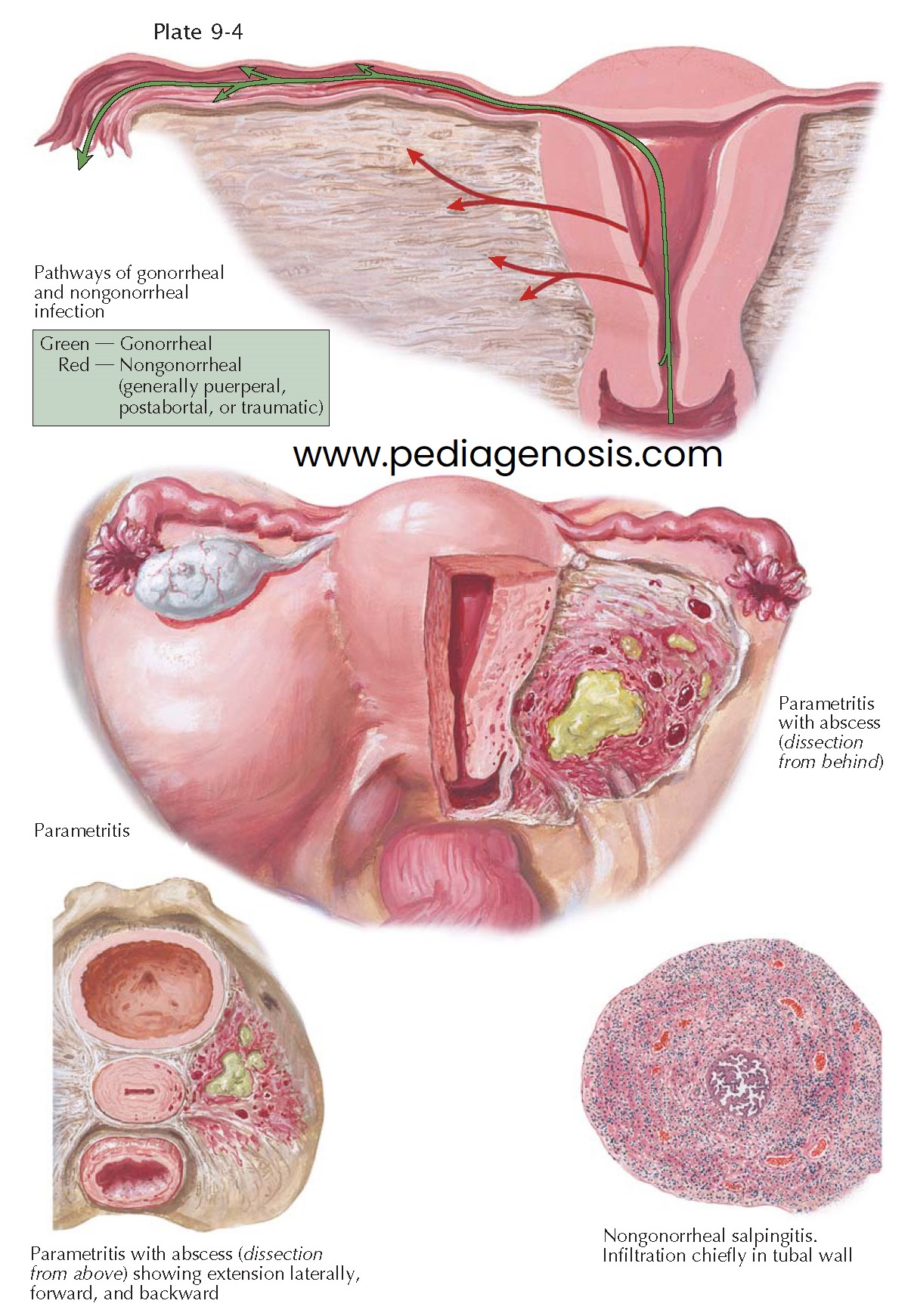 Inﬂammatory diseases are not only frequent but also potentially serious—with both immediate and longterm consequences. The tubes, which are inserted between the uterus and the ovaries, are easily infected from either of these organs. The open communication of the tube with the peritoneal cavity exposes the tube to any peritoneal infection and vice versa. Appendicitis is a frequent source of infection of the right or of both tubes; sigmoiditis or diverticulitis often migrates to the left tube. Sometimes the hematogenous route infects the tubes. This is the rule in tuberculous salpingitis.

Inﬂammatory disorders of the uterus frequently extend to the tubes. The ciliary current of the tube is a very weak protective apparatus, and the narrow communication between tube and uterus is an ineffective barrier. Besides, the narrow lumen proves to be a serious handicap when the tube is inﬂamed. Swelling of the mucous membrane may cause complete occlusion of the uterotubal junction, thereby preventing drainage of inﬂammatory secretions into the uterine cavity and potentially forcing infected material further toward the ﬁmbrial end and the peritoneal cavity.

The uterus, because of its free drainage and periodic menstrual shedding, may appear healed, whereas the inﬂammation in the occluded tubes still persists. On the other hand, the occurrence of tubal inﬂammatory disease is favored by the tendency of the uterus to react to abnormal stimuli, such as bacteria or chemicals, by spasm of the internal cervical os and severe contractions, which drive these noxious agents into the tubes. Lipid imaging solutions, which are occasionally used for hysterosalpingography, may cause serious damage to the tubes.

Bacteria may invade the tubes from the uterus or from the bloodstream. The latter holds true for Mycobacterium tuberculosis, whereas gonococci, Chlamydia, and most other bacteria reach the tube by way of the mucous membranes. Gonococci settle mainly in the mucosa and have little tendency to invade deeper tissues, though they do tend to cause a transluminal inﬂammatory response. In contrast, chlamydial infections tend to engender a much milder but longer-lived inﬂammatory response, accounting for their often indolent course and greater degree of long-term tubal damage.

The parametrial lymphatics and veins are ﬁlled with pus and partly solid, partly liqueﬁed thrombi, whereas the surrounding tissue is distended by serous and seropurulent exudate. These changes constitute parametri- tis, which is mainly a lymphangitis and thrombophlebitis. Because the blood and lymph vessels are contained in the condensed zones of the pelvic connective tissue, the inﬂammatory inﬁltrate assumes the shape of these zones. It is wedge-shaped, with the base directed toward the pelvic wall and the blunt apex at the uterus. According to the arrangement of the zones of condensed connective tissue, an anterior, posterior, and median parametritis can be distinguished. In severe infections, all three zones are affected. Sometimes the purulent infection destroys the parametrial structures, causing a parametrial abscess, which may break into the zones of loose connective tissue and rapidly spread within these zones and the connected areas. The rounded shape of a large parametrial abscess can modify somewhat the wedge shape of the unliqueﬁed, rigid parametrial inﬁltrate.

Risk factors for salpingitis include early (age) sexual activity and multiple sexual partners. These and related risk factors primarily affect the likelihood of acquiring gonococcal and chlamydial infections of the cervix, which, in turn, ascend into the upper genital tract, causing salpingitis. Uterine instrumentation (hysterosalpingography, intrauterine contraceptive device placement, endometrial biopsy, dilation and curettage) can also cause salpingitis but this occurs infrequently in the absence of sexually transmitted infections.