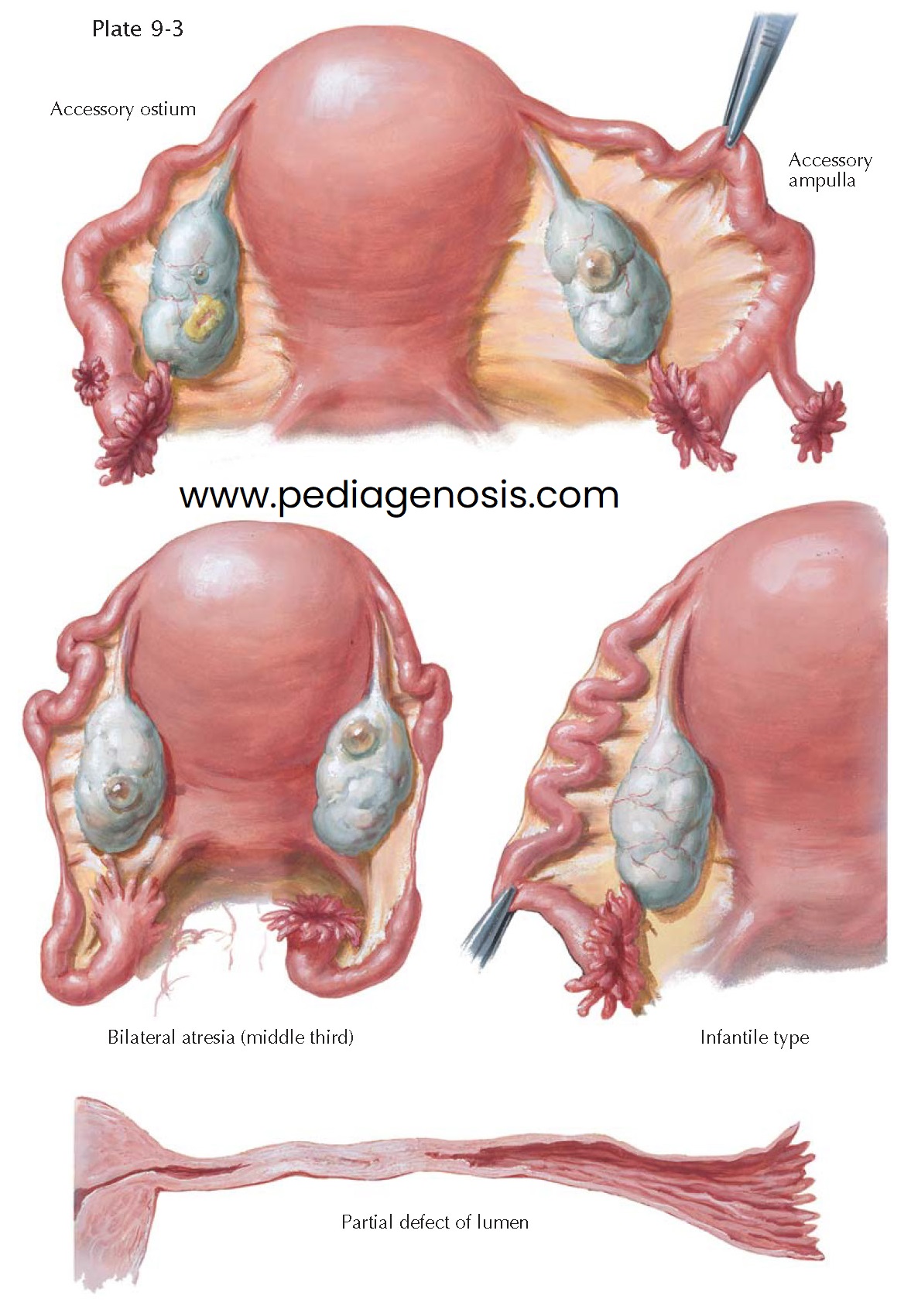 Unilateral complete or partial defects of one müllerian duct are more common than aplasia of both ducts. Many variations of this anomaly are encountered, such as uterus unicornis, with or without rudimentary contralateral horn; unilateral atresia; or total, partial, or regional defect of the fallopian tube. The genesis of partial defects of the fallopian tubes is very hard to explain. But the same holds true for similar congenital defects occurring in other hollow organs, for example, the esophagus, the small intestine, and the vas deferens. The nature of the temporarily inhibiting factor responsible for the defects in the lumen or the continuity of these organs is unknown, and all attempts to explain these lesions have failed hitherto.

In contrast to the rarity of supernumerary tubes, accessory tubes and accessory tubal ostia are very frequent. The accessory tubes arise either from the main tube or from the mesosalpinx and consist of a more or less well-developed wreath of ﬁmbriae with a pedicle, which is usually thin and may be either hollow or solid. Even if hollow, it does not communicate with the cavity of the main tube. If the lumen of the accessory tube is closed at both ends, it becomes transformed into a small pedunculated vesicle. Production of tubal ﬂuids within this blind segment can result in cystic dilation, mimicking a hydrosalpinx or ovarian cyst.

Although accessory tubes may arise from any part of the ampullary portion of the tube and even from the isthmic section, accessory tubal ostia are always situated near the main ostium. The accessory ostia have the same appearance and structure as the main ostium. They always communicate with the tubal cavity. There has even been a single case report in which laparotomy demonstrated that the proximal portion of one fallopian tube was absent and that the distal end was separated into three portions.

Hypoplasia of the fallopian tube is frequently seen. The hypoplastic tube is thin and ischemic, its musculature weak, and its ampulla poorly developed. A special type, commonly designated as “infantile tube,” is characterized by tight windings that are bridged by peritoneal folds and, therefore, cannot be straightened. It may be that the peritoneal bridges between the tubal windings interfere with the tubal peristalsis in the same way as do adhesions and predispose to retention of the fertilized ovum in the tube and thereby to the occurrence of ectopic pregnancy.

In utero exposure to diethylstilbestrol (DES) has been associated with fallopian tubes notable for pinpoint ostia, constricted ﬁmbriae, and a short or a sacculated or convoluted course. These changes may be a cause of female infertility and are generally not detected by hysterosalpingography. It has also been postulated that salpingitis isthmica nodosa may follow DES exposure during gestation.

Conventional therapy consisted of surgical correction, where possible, but the availability and success of oocyte harvesting, in vitro fertilization, and embryo transfer have generally supplanted surgical therapy.