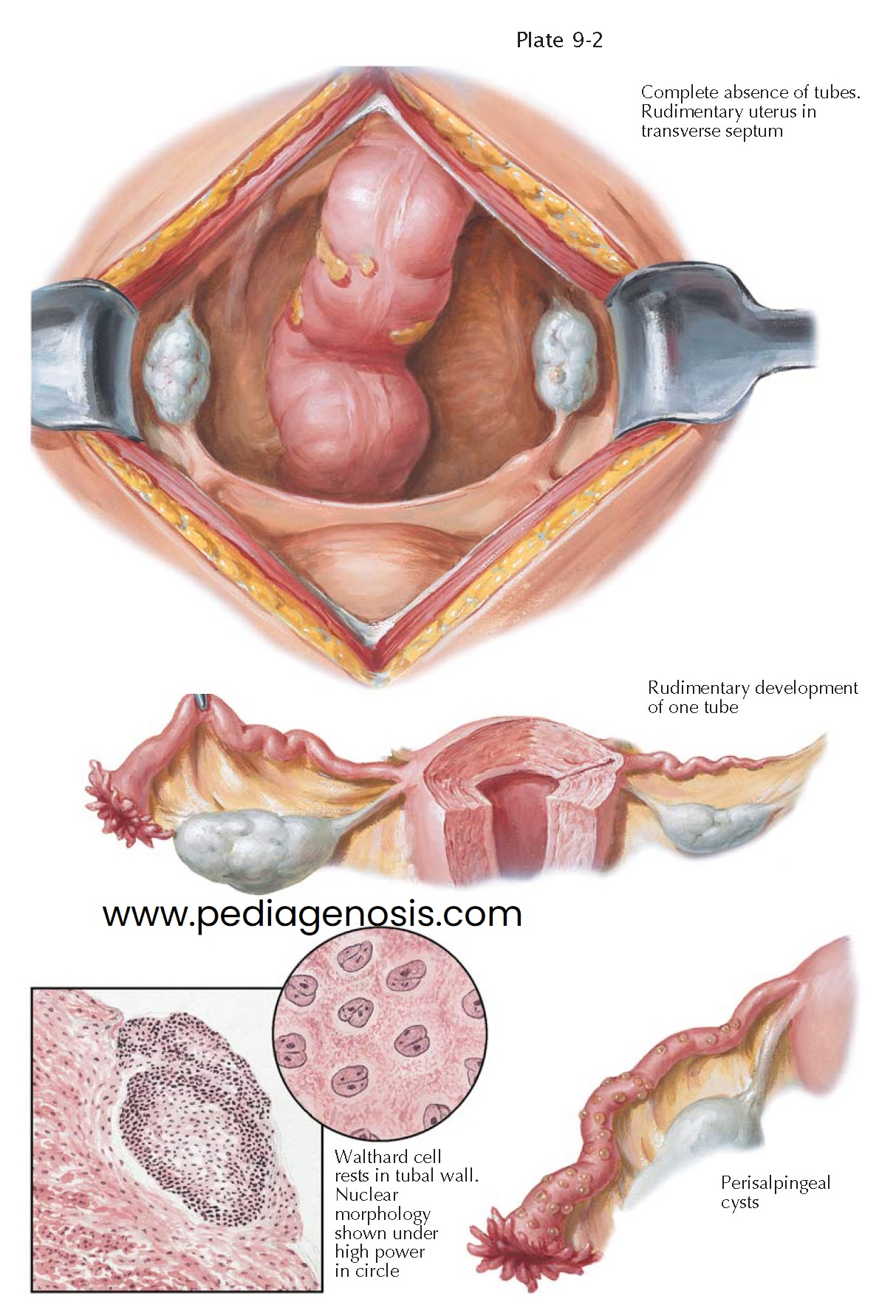 The fallopian tubes arise from the unfused cranial portions of the müllerian (paramesonephric) ducts. The origin of these ducts is ﬁrst indicated in embryos of 8.5 to 10 mm by grooves in the thickened epithelium of the urogenital ridge lateral to the wolfﬁan ducts, which were formed in an earlier stage of development. Soon these grooves become deeper and advance caudad as tubes until they meet the epithelium of the urogenital sinus in a prominence, the müllerian tubercle.

The paramesonephric ducts, and similarly the wolffian duct, grow more slowly than the fetal trunk as a whole. As a result, the location of the coelomic ostia of the ducts gradually slides caudally to the fourth lumbar segment. Originally, the urogenital fold, which contains the mesonephros and the wolfﬁan and müllerian ducts, has a sagittal course parallel to the spine. The development and growth of the adrenals and kidneys cephalad to these structures change the direction of the urogenital fold, bending it laterally in its upper section. With progressive descent of the ovary and the fallopian tube, the direction of the tube becomes more transverse, whereas the lower parts of the müllerian ducts, which give rise to the uterus, retain their original longitudinal course and fuse in the midline.

The muscular and connective tissues of the tubes are ﬁrst apparent in the third month of fetal life and may be clearly demonstrated in the ﬁfth month. However, the ampullary portion does not take on its characteristic appearance until the last month of gestation.

Congenital anomalies of the fallopian tubes may be due to developmental error or injury, such as torsion or inﬂammation. Complete absence of both tubes is sometimes observed in combination with aplasia of the uterus. In such cases, a transverse pelvic septum, corresponding to the broad ligament, connects the ovaries and may contain muscular nodules in the lateral sections of its upper margin that represent rudiments of the müllerian ducts. The round ligaments, which have a separate origin, may be well developed. In these cases aplasia of the vagina is common but not the rule.

Absence of the ampullary portion of the tube is probably caused by twisting and subsequent necrosis with resorption of the ampullary portion of the tube rather than a result of developmental failure. A congenital defect of the wolfﬁan duct is, as a rule, followed by a defect of the homolateral müllerian duct. The resulting anomaly is characterized by the absence of the fallopian tube, the uterine horn, the kidney, and the ureter.

Small, solid, or cystic nodules of a type ﬁrst described by Walthard and thus called “Walthard cell rests” are commonly found in the subserosal tissue of the fallopian tube. The nuclei of these Walthard cells show a median groove or fold, which is a fundamental characteristic of these cells.

Frequently found on the surface of otherwise normal fallopian tubes are tiny multiple serosal (perisalpingeal) cysts. They apparently originate from an invagination and occlusion of the serosal epithelium and do not have any practical signiﬁcance. The supposition of some authors that these cysts are caused by chronic inﬂammation is not generally accepted.