The fallopian tubes are musculomembranous structures, each about 12 cm in length, commonly divided into the intramural, isthmic, and ampullary sections. 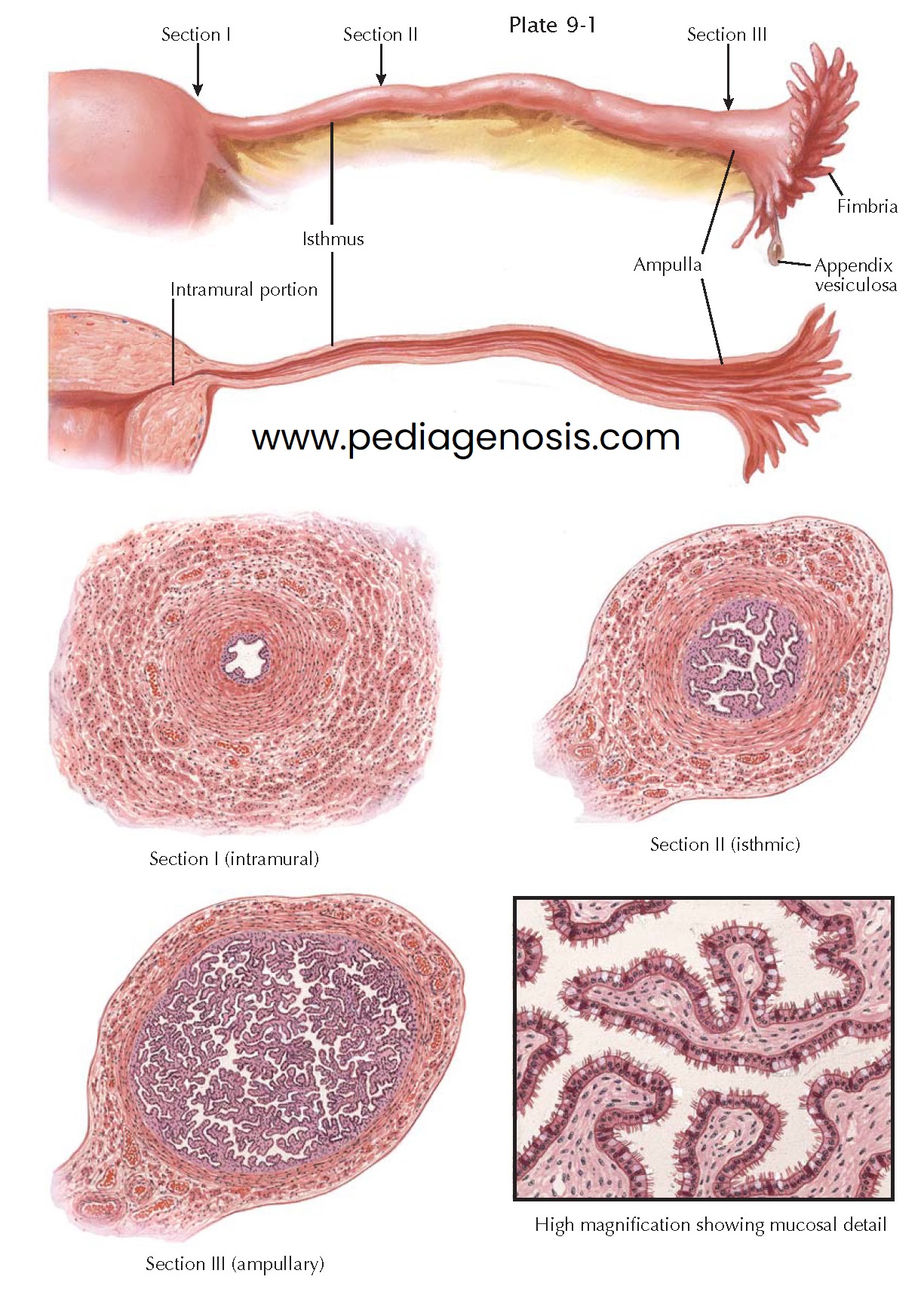 The intramural (interstitial) portion traverses the uterine wall in a more or less straight fashion. It has an ampulla-like dilation just before it communicates with the uterine cavity. On hysterosalpingography, this tiny tubal antrum either is connected with the shadow of the uterine cavity by a threadlike communication or is separated from it by a narrow, empty zone. This constric- tion of the tubal shadow, usually designated as the tubal sphincter, is caused by an annular fold of the uterine mucosa at the junction of both organs.

The isthmic portion is not quite so narrow as the intramural part. Its course is slightly wavy. The ampullary portion is tortuous and gradually widens toward its outer end. It terminates in a ﬁmbriated infundibulum, which resembles a rufﬂed petunia or sea anemone. One of the ﬁmbriae, the ﬁmbria ovarica, is grooved and runs along the lateral border of the mesosalpinx to the ovary. Frequently, one or more small vesicles ﬁlled with clear, serous ﬂuid, called appendices vesiculosae or hydatids of Morgagni, are attached to the fringes of the tube by a thin pedicle. They are remnants of mesonephric tubules.

The wall of the tube consists of three layers—a serosal coat, a muscular layer, and a mucosal lining. The tunica muscularis is composed of an inner circular and an outer longitudinal layer of smooth muscle ﬁbers. The interstitial portion is equipped with an additional, innermost, longitudinal muscle layer. The muscular coat is thicker in the medial section than in the ampullary portion, where the longitudinal muscle bundles are more widely separated. Contraction of the longitudinal muscle ﬁbers of the ovarian ﬁmbria brings the infundibulum in close contact with the surface of the ovary. The abundant blood supply of the tubes is derived from the ovarian and uterine blood vessels. The blood vessels are strikingly abundant, particularly in the infundibulum and the ﬁmbriae, where they form with interspersed muscle bundles a kind of erectile tissue, which, if engorged, enables the tube to sweep over the surface of the ovary.

The mucosa (endosalpinx) is thrown into longitudinal folds that are sparse, low, and broad in the inner portions but numerous, branched, and slender in the ampullary portion. The simple mucosal arrangement of the inner sections contrasts strikingly with the complicated, labyrinth-like appearance of the arborescent mucosa in the ampulla.

The mucosa rests on a thin basement membrane, is connected with the muscularis by a thin layer of loose, vascular connective tissue, and can undergo moderate decidual reaction if a fertilized ovum becomes implanted in the tube.

The mucosa consists of a single layer of columnar cells, some of which are ciliated, whereas others are secretory. A third group of peg-shaped cells with dark nuclei is intercalated between the ciliated and secretory cells and represents apparently worn-out cells, which are gradually cast out into the lumen of the tube. The numerical relationship between ciliated and secretory cells changes during the menstrual cycle. The number of secretory cells that secrete nutrient material to sustain the ovum during its stay in the tube is greater in the luteal phase. The height of the tubal epithelium reaches its peak during the period of ovulation and is lowest during menstruation.